THERE WAS NO LADY GAGA IN THE RENAISSANCE

Like so much else that is wondrous and creative, the arts of the past, were a pastime for men alone. We don’t know if, as in the Regency period with its authors such as the Bronte Sisters who first published under men’s names, there were such feminine composers during the Renaissance period. But at first glance, it seems clear…there was no Lady Gaga in the Renaissance.

While Italian artists—painters, sculptors—seem to have a monopoly on the era known as the Renaissance (1400-1600), it’s musical crafters came from all over Europe. A non-believer in competition (a believer instead in the great things that humans create, whether alone or together, but never against), these musical statesmen are mentioned in no particular order (though there are many places on the web which will try to define which is the best and which isn’t).

I will put the name of William Byrd first, on the advice of my oldest son (an opera student who sings with the Boston Symphony Orchestra’s Tanglewood Chorus). My son rates Byrd (an English man, 1540-1623) at the top for the very in depth and complicated motets he wrote for all the huge churches. Byrd was also known for writing some of the most difficult and forward thinking music of his day, as well as being a virtuoso in every style already in existence. Byrd, who began writing in his teenage years for Mary Tudor, wrote well into his seventies and was praised with wonderful lyricism by Baldwin:

Yet let not straingers bragg, nor they these soe commende,
For they may now geve place and sett themselves behynde,
An Englishman, by name, William BIRDE for his skill
Which I shoulde heve sett first, for soe it was my will,
Whose greater skill and knowledge dothe excelle all at this time
And far to strange countries abrode his skill dothe shyne...

The French had many composers of note, not the least of which is Pierre La Rue (1460-1518) whose repertoire consists entirely of vocal music but of whose childhood no records can be found. And, though there is no certainty of where he was born (Picardy, Burgundy or the Ile-de-France are the most likely locations), Claudin de Sermisy (1495-1562) served several kings of France, including my favorite, François I.

And then there are the Italians. There is Claudio Monteverdi (1567-1643), whose revolutionary music included the first dramatic opera, Orfeo. Known as the Prince of Music, Giovanni Pierluigi da Palestrina (1525-1594) was considered one of the greatest composers of liturgical music, indeed a savior of the genre. A Venetian, Giovanni Gabrielli (1553(-6)-1612) represents the pinnacle of the High Renaissance Venetian school. And Luca Marenzio (1550-1599) was one of the most renowned composers of madrigals, writing no less than 500 of them. 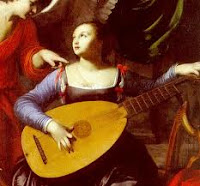 Of course any discussion of Renaissance music would be incomplete without mentioning the lute, the most popular solo instrument of the age. King’s throughout Europe would vie for the best lute players to reside at their court, paying top dollar for them along with a plethora of other benefits. A lute is best described as a plucked string instrument with a neck that may be fretted or unfretted, and a deep round back, producing a silvery yet ravishing sound, a definitively romantic sound in the quixotic sense. Ironical to this article, this is one of the few instruments that women were allowed to play with frequency and one at which they excelled, though only in private.

And if Dick Clark held his Bandstand during the Renaissance, the song to take the top spot (both because “the lyrics are great and it’s easy to dance to”) would be Greensleeves. Regardless of the pervasive rumors that the song was written by Henry VIII for Anne Boleyn, it more than likely comes from the Elizabethan era. A broadside ballad by the name of Greensleeves was registered at the London Stationer’s Company in September 1580 and was described as “A New Northern Dittye of the Lady Green Sleeves”. The incorrect attribution to Henry for Anne is most likely because of the ‘green’ context, a color which held sexual connotations, i.e. a woman’s gown would be green for her having ‘rolled in the grass’ with a lover. Greensleeves, like so many songs of the time, was most often played on the lute. 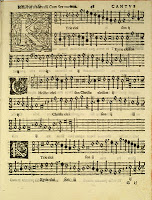 "Thou couldst desire no earthly thing,
but still thou hadst it readily.
Thy music still to play and sing;
And yet thou wouldst not love me."

As in all of the creative arts, as well as the sciences, the Renaissance was an age of great intellectual and creative expansion and evolution. Oh how the mind whirls at what a Gaga—with a woman’s sensibilities and insights—might have produced.