Cosimo de Medici, the Elder:
The Women in his Life

Like most powerful men, men for whom a single word can send others jumping to do his bidding, no matter how trivial, no matter how significant, Cosimo de Medici exuded a dynamism that belied his not-quite-handsome countenance. These men throughout history, to the present, have surrounded themselves with beautiful women, few exhibiting the willpower to restrain themselves, to contain their sexual encounters to their wives only. For Cosimo, however, there were few women, in fact, only two. 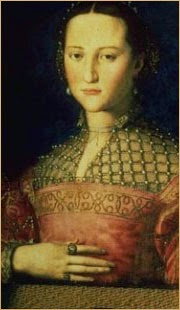 Born in Florence in 1391 to Alessandro de Bardi, Contessina de Bardi was blessed with delicate beauty. At the time of her birth, and for much of her childhood, her family had been the wealthiest in all of Florence, amassing their fortune as the leading bankers of Europe, the Compagnia dei Bardi. Unfortunately, when in 1345, King Edward III of England defaulted on his loan with them--a loan of 900,000 gold florins--the family was plunged into bankruptcy. In an age where family-matched marriages were made to either further the family's postion or wealth, the merging of the Bardi and Medici families seemed tailor made. For all the wealth and power the Medicis had accumulated, there was one thing lacking...nobility. Though Contessina came to Cosimo with little in the way of a dowry, she instead  brought to him that elusive quality...aristocracy.

The nobility of the Bardi family can be documented to 1164, when Emperor Friedrich Barbosa bestowed upon the family via the first Count, Alberto, the county of Vernio along with the right to confer the noble title on his descendents. Regardless of their bank's failure, the Bardi's continued as a family of influence in Florence and to enjoy their status of nobility. Family members further distinguished themselves in the Crusades, more obtaining knighthood, and as ambassadors to the Vatican. It was, therefore, the perfect melding of wealth and gentry when, in 1414, Contessina de Bardi married Cosimo de Medici.

As the wife of one of the most powerful men in Florence, perhaps throughout the Italian states, Contessina distinguished herself as a mother, a fine manager of their household, and as one cautious with money. Contessina and Cosimo's marriage lasted for forty-nine years, ending only at Cosimo's death in 1463. By that time, Contessina had become a loving grandmother and remained with her son and his family until her death ten years later. There was very little to have come between Cosimo and his Contessina...save for Maddalena. 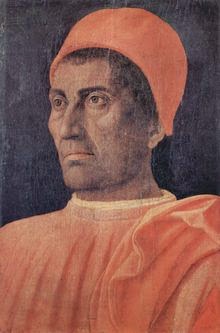 Though little facts and no images remain of Cosimo's mistress, two theories abound. Based on the features of
their one offspring, Carlo, depicted here in a portrait by Andrea Mantegna, one theory postulates that Maddalena was an African slave-woman, more than likely purchased in Venice. But, in this same portrait, one can see 'intense blue eyes' and in a portrait by Filippo Lippi, Carlo is rendered with typical Italian skin pigmentation. Such details give sway to a second theory, that Maddalena was a Circassin, a Northern Caucasian ethnic group misplaced by the Russian conquest of Caucasus. Carlo was given the benefit of an education worthy of a Medici, illegitimacy aside, and became an Italian priest who would served as a senior clergyman.

Though inappropriate to modern sensibilities, it would appear that in his dealings with the two women in his life, Cosimo upheld his code of honor and respectability, a code that would reign through his lineage for centuries to come.

Thank you for this. The tv show and everything I have read shows Contessina in a positive light. I'm glad.

I'm also looking to see what happened to the slave girl, Madeline, who was mother to Carlo? When was she banished from the De Medici home? I know Contessina raised him, so I assume she was banished and not around while this happened. Thanks.