THE ARTISTIC RENAISSANCE BLOSSOMS
UNDER THE PATRONAGE OF
COSIMO DE MEDICI

To delve deeply into the life of Cosimo de Medici, pater patriae, Florence's Father of the Fatherland, we find a hard-nosed business man; a man who brought his family and his homeland to financial, flourishing greatness with his business acumen. Though his aptitude resided firmly in banking and the accumulation of wealth, he knew the value of art as well, though his admiration was tempered by the value he placed upon it.

The painter Salviati quotes Cosimo as saying, “All those things (works of art) have given me the greatest satisfaction and contentment because they are not only for the honor of God but are likewise for my own remembrance. For fifty years, I have done nothing else but earn money and spend money; and it became clear that spending money gives me greater pleasure than earning it.” Clearly, he understood the importance of art in his life as well as in the evolution of human beings...as the gift that it is. And he put his money behind such truths, beginning the tradition of sponsorship through commission, that would bring the world some of the greatest artists and their work the world has ever known.

Though Cosimo was patron to many, a few reach out to us for the immortality of their splendid work.

Donato di Niccolo di Betto Bardi (1386-1466), better known as Donatello, is known as one of the greatest sculptors of the Renaissance, if not all time. His work is touted for its savage force and strength; a reflection, no doubt, of the dynamic, vigorous times in which he lived. Here are a few of the works produced thanks, in part, to the patronage of Cosimo de Medici. 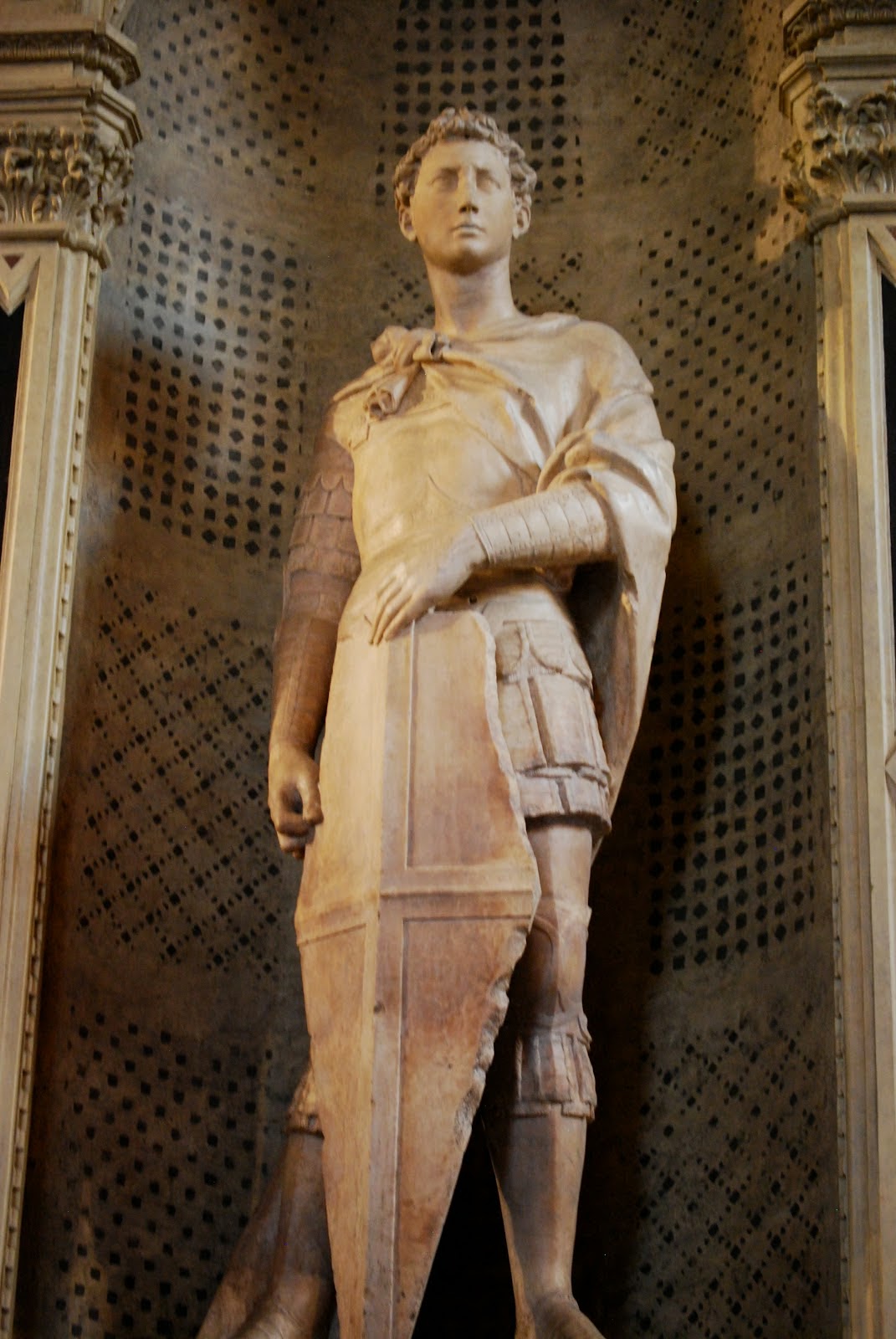 Donatello's St. George
c 1420 Marble 6'5"
An exquisite example of the artist's emotional realism, his ability to create narratives
and characters, ready to move, to fight, to truly exist. 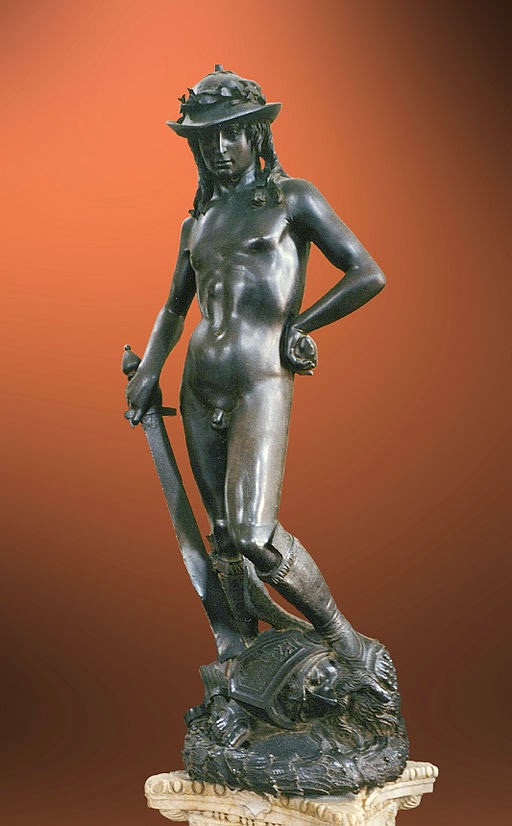 Donatello's David
c. 1440s, bronze, 5'2"
Revolutionary for its day, it depicts David not as the king he was to become,
but as the innocent and virtuous youth which holds the promise of the greatest yet to come. 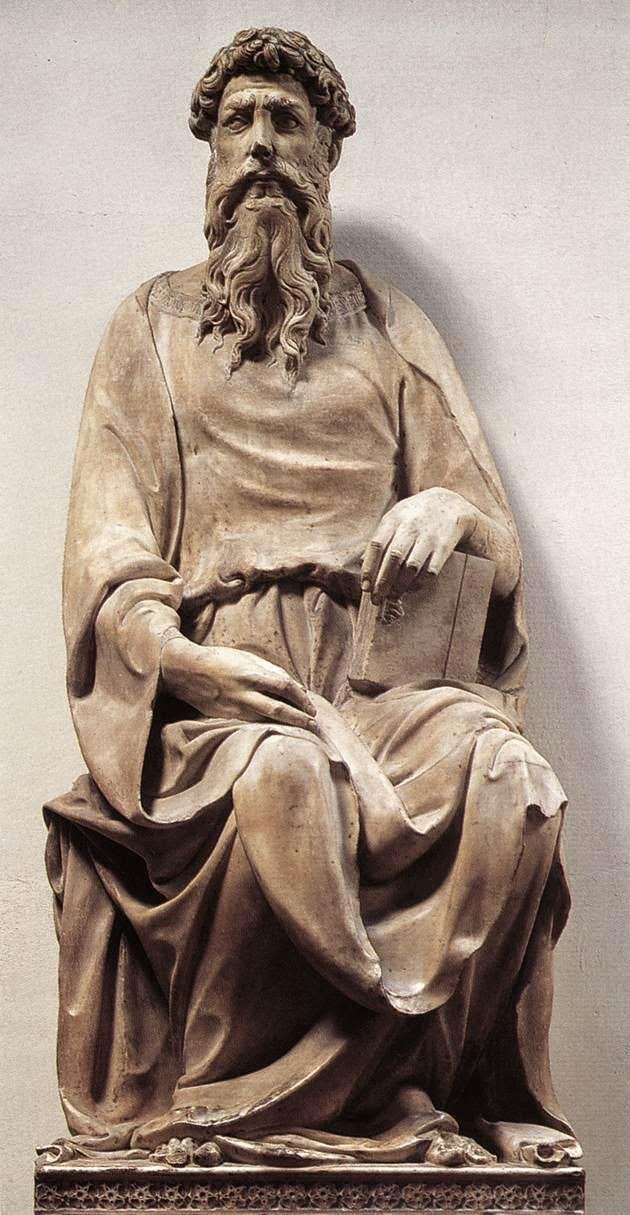 St. John the Evangelist by Donatello
c. 1410, marble,  6'8"
This statue represents a clear example of perspective achieved. To offset the distortion
from seeing the statue from below, Donatello elongated the body in relation to his legs.
Remarkable are the saint's deep, penetrating expression, and the realistic treatment
of his open hand on the book.

Born to a butcher and his wife who died while he was still a small child, Fra' Filippo Lippi (1406-1469) would be raised by his aunt, Mona Lapaccia. As schoolboy, instead of studying he would spend all his time scrawling pictures on his own books and those of others. (Lives of Artists, Vasari). Through his evolution, we see the very evolution of painting into the realm of realism and dimensionality. 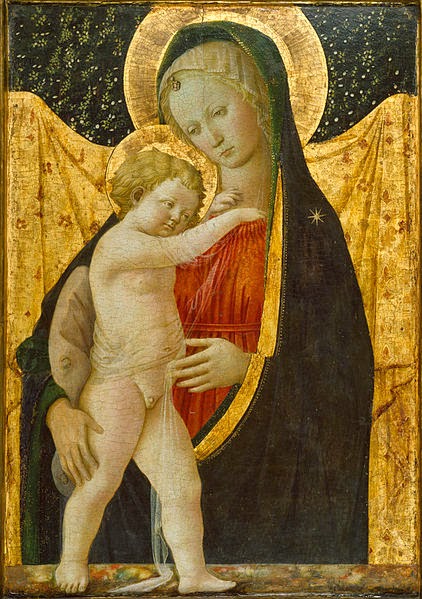 Madonna and Child c 1440
The Walters Art Museum
This tender and classical rendering is clear evidence of the obsession with
the antiquity that would characterize the age. 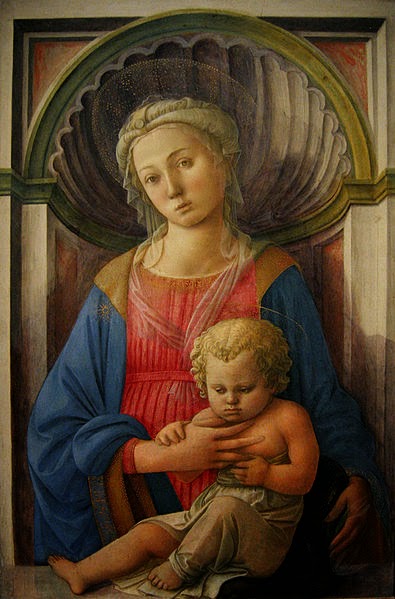 Madonna and Child c 1445
National Gallery of Art
The similarity of expression is a telling sign of Fra Filippo Lippi's devotion,
yet the more readily apparently dimensionality, as well as the delicacy of details
(especially the golden mesh-like, intricate halo above Mary's head) clearly reveal
the evolution of the artist's prowess. 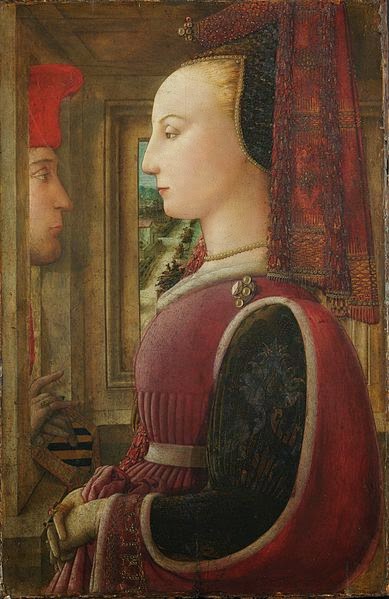 Portrait of a Man and Woman at a Casement c1440
Metropolitan Museum of Art
Perhaps one of the most recognizable of Lippi's works, the composition depicts a common
occurrence in the courtship of the day, when a man would climb to a woman's window
to see her, to speak with her, as Romeo did to Juliet. It is the earliest surviving double
portrait in Italian art, most probably Ranieri Scolari and Angiola di Bernardo Sapiti.
The work baffles scholars as to its purpose...is it to commemorate their marriage,
the impending birth of their child and yet their eyes do not meet.

Mad and poverty stricken, it was the patronage of Cosimo, his commission and sponsorship, which not only pulled Filippo Brunelleschi (1377-1446) from the dregs of a hard life, it catapulted him to eternal eminence. Though the architect designed and built many breathtaking buildings, one need look no further than the Duomo--the domed cathedral of Santa Maria del Fiore--to see his true brilliance. 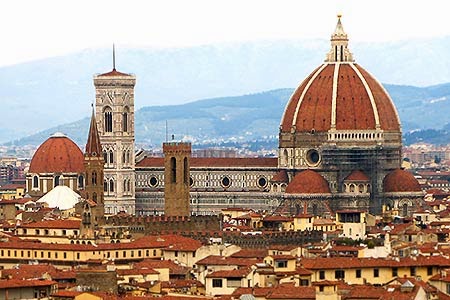 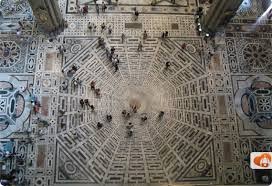 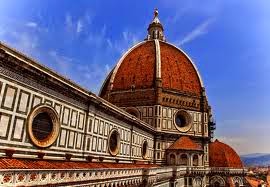 Construction on the new cathedral began in 1294, Brunelleschi's involvement did not begin until 1418. In that year, the Arte delle Lana (the guild of the wool makers) held a competition to determine who would finish the magnificent structure with the design and construction of the dome. The two main competitors were Lorenzo Ghiberti and Brunelleschi, the latter with the full support of the Medici. The work, which began in 1420 and ended in 1436, would produce not only one of the most aesthetically impressive  and glorious of structures, it would make history, becoming the first 'octagonal' dome to be built without a temporary wooden supporting frame, a feat many believed impossible. Years after its completion, Florentines often worried over its collapse, having little faith in the innovation that took place in their city. Brunelleschi was granted the honor to be buried in the Basilica di Santa Maria del Fiore with a marble bust, reputed to be carved from life, and placed in perpetual memory with a fitting epitaph, "Both the magnificent dome of this famous church and many other devices invented by Filippo the architect, bear witness to his superb skill. Therefore, in tribute to his exceptional talents, a grateful country that will always remember buries him here in the soil below."

By the time of his death in 1464, it is believed that Cosimo invested near to 600,000 gold florins in the support of scholarly learning, architecture, and other arts. As it is known that the fortune left to him by his father only equaled approximately 180,000 florins, this number is staggering, clear evidence of the man's ability not only to make money, but to spend it wisely.