The Lever, Coucher, and More: A Day in the Life of a French King

Your eyes flutter open, sight still hazy with the fuzziness of sleep. At eight o’clock, the curtains around your bed--sequestered as it is in a gold balustrade alcove—are thrown open by your valet de chambre, the one man to have slept in the same room as you. Your childhood nurse bends gingerly down over you, placing a kiss upon your forehead as the chief physician and the chief surgeon look on. Your chamber pot is removed and the curtains are drawn. You wait.

At a quarter past the hour, the curtains are opened once more. Now the Grand Chamberlain is allowed entrée, bringing with him only those who has kowtowed the most exuberantly, curried the most favor—only those whom you have deemed worthy to experience the privilege of watching you rise. You are the King of France, and your lever (rising ceremony) continues.

Louis rose from his bed, taking a drink from the cup of sage tea at his bedside, then knelt to say some quick prayers, oblivious to the growing activity at the edges of his room.

Behind Mme. Hamelin, the morning’s procession began. Three doctors, including the King’s First Physician and his First Surgeon, entered, all three men elaborately dressed in their enveloping black robes, long wigs of white curls, and tall, peaked hats belonging only to those of their vocation. After a cursory examination by all three men, the parade of nobles began.

The First Entrance, led by the Princes of the Blood, was fairly short. With barely an open eye and no inhibitions whatsoever, Louis strode to the corner, lifted his nightshirt, and relieved himself in his chaise percée. Nowhere was the lack of privacy more evident.

The Kings of France lived under the constant eye of their people; even here in what should have been a person’s most private moment. The young and old men bowed to their sovereign as the Grand Chamberlain handed over the dressing gown, the one presented by the First Lord of the Bedchamber, to the King. With dressing gown in place, Louis gracefully pulled on his own hose, only to have a couple of high dignitaries kneel and fasten his bejeweled garters for him. They stood, signaling the Second Entrance to begin.

Today Jules de Bourbon, the son of the Prince de Condé, led this larger group of courtiers, traditionally preceded by the First Nobleman of the Realm, the highest–ranking man in attendance each day. Not far behind him, Henri entered the room. A few steps behind him, Gaston du Bois fumed, spying the young man entering before him. Gaston recognized him from the soirée the night before, but his appearance here this morning, and so far at the front of the procession, made Gaston wonder about the true identity of this young cavalier.

The Third Entrance began to make their way in, line after line of barons and peers, bowing and scraping and bumping one another in their thirst to be in front and perhaps be the one bestowed with the honor of handing the King his waistcoat. The Fourth Entrance, including the Secretaries of State, quickly followed these men. Louvois strode before Colbert, though the older man retained seniority by greater rank as well as age. The Secretary of Finances moved much slower these days; he appeared wan, the skin on his round face pale and sagging around his deeply dimpled chin.

Any visiting ambassadors filled the Fifth Entrance, while the Sixth was by far the most colorful, made up of red cardinals and purple bishops. All the day’s lever participants were now in the room, close to one hundred men, and the final touches were put to the King’s outfit. The Master of the Wardrobe fastened the King’s jabot, then the Lord of the Neckcloths adjusted it.

Completely dressed, Louis bowed to the vast assembly before him, noticing every face, making a mental note of those whose faces he failed to see.

A King’s coucher—his daily retirement—is but the reverse of the lever, though it allowed women to pass by the king and bid him a good night as well.

Louis XIV was the master of the lever and coucher, understanding better than any sovereign that came before, the power in bestowing such privileges, using such leverage to his benefit. Deeply affected by the Fronde (an uprising of nobles traumatizing his early childhood), Louis plied every tool—every form of manipulation and coercion—to keep his court under his control. Previous kings were not so stringent; many used the occasions to fatten their purse, allowing nobles to purchase their place at such ceremonies. While others, such as François I (the featured king in my next work, To Serve a King, releasing Feb. ’11), desired only for his dearest friends—even those whom he raised to nobility—to share such intimate moments. 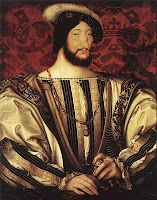 Meal times were no exception for Louis XIV and other French kings and were done with great pomp and circumstance. At one o’clock each afternoon, and the men of the court looked on, the king was served an enormous meal at an equally large table in his bedchamber. Typical fare included soups, pheasant, some other fowl such as duck or chicken, along with mutton, ham, boiled eggs, salads and finished with pastries and fruits. Ironically, the meal was titled le petit couvert, the little service.

Le grand couvert was served at ten o’clock in the evening. Taking place in the king’s antechamber with his family members around him, the meal lasted close to an hour, was served by fifteen officers, and was offered au public—a sign of authority dating back to the Middle Ages. Guards were required to regulate the flow of traffic through the room as commoners, merchants, and peasants filed by to glimpse the king at table, bowing quickly before him in complete silence, for the king would not be distracted from his food. Louis used the occasion to, yet again, put his nobles in place—allowing only a handful to sit during the lengthy meal—and to display his great magnanimity.

Subsequent kings and queens, especially those descended from the great Sun King, did not find the control nearly as tantalizing; many did, in fact, resent the intrusion on their privacy that extended to the marriage bed and the moment of child birth. For some, the ostentatious lifestyle revealed in these private moments would prove to be their downfall.

Louise de Savoy, François I’s mother, will be the topic of next month’s post, a woman who fought against male authority to keep guardianship not only of her own children, but those of her husband’s mistress.