MICHELANGELO: A SHORT HISTORY OF A LONG, MAGNIFICENT LIFE 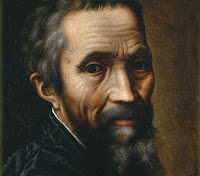 To sum up a life such as Michelangelo Buonarotti’s in the length of a blog post seems not only an impossible challenge but the epitome of an understatement, yet if there was ever a life worthy of such an endeavor, it is his.

Michelangelo (correctly pronounced mi-keh-LAHN-geh-lo, not michael-angelo) is perhaps one of the most well-known artists, the man who struggled for years to complete one of the ultimate pieces of art ever created. But in truth, Michelangelo’s struggles began almost at the beginning of his life and they were to mold that life as distinctly as he himself would carve his great statues. When I uncovered his connection to my main historical character in The King’s Agent, I felt it a blessing to be able to research this gifted man’s life and a privilege to include him in one of my books.

Born on March 6, 1475 in Casentino, Italy, outside the walls of the grand city of Florence, his father was Lodivico di Lionardo Buonarroti-Simoni, the Podesta of Caprese and Chiusi. His mother, Francesca di Neri di Miniato del Sera, gave birth to five sons in all, all within an eight year span. It killed her, and it was a loss that would shape the entirety of Michelangelo’s life.

Because of his mother’s ill health, Michelangelo was suckled by a wet nurse. The loving woman, nurturing in even sense of the word, was one Signora Topolino, a stonecutter’s wife living in the rocky hills of Pontasseive. Michelangelo found such encompassing affection from this woman and her family that he would return to them, for days and months at a time, throughout the entire course of his life. It is a great myth—one that might have started from Michelangelo’s own lips—that he ingested stone dust along with the woman’s milk, binding him and his life to worship of the stone.

Michelangelo was six when his mother passed and, from that moment on, he lived a life of solitude; his father was consumed by his grief and incapable of caring for the children Francesca left behind. Lodivico’s sister, Michelangelo’s Aunt Cassandra, took over the care of the household, but she was a cold if efficient woman, seeing to the boys’ needs but with little love in the act. Nonna Alessandra, Michelangelo’s grandmother, offered some affection, but it was not enough to fill the emptiness created by the loss of his mother. None of the adults cared much to keep track of the young boy’s comings and goings and Michelangelo became a child of the streets, an urchin as prone to mischief as he was to curiosity.

At the age of 13, his father sent Michelangelo to school in the city proper, under the auspices of Francesco da Urbino, but he neglected all of his studies save for drawing. And though his father and uncle tried, literally, to beat the predilection for art out of the child, they were vastly unsuccessful, eventually capitulating to Michelangelo’s truth and fostering his artistic achievements.

In 1488, at the age of thirteen, he entered the studio of Domenico and Davide Ghirlandaio, elite members of the large Florentine artistic community. There he learned the cutting edge techniques of the age and studied the works of such masters as Giotto, Donatello, Ghiberti, and others, those considered the founding fathers of the Renaissance. In 1489, he became a pupil at the School of Sculpture headed by the great Bertoldi, who was himself a student of the master Donatello. Here his obsession with sculpture would be secured and here he would come to the attention of one Lorenzo de’ Medici, Il Magnifico. His life would be forever changed for it.

From this moment on, Michelangelo’s life would be one of learning, not only artistically, but philosophically and of self-enlightenment, present in the studio of Lorenzo during the deep discussions of Paganism and Humanism. He studied the human anatomy by sneaking into the morgue of a church and dissected the bodies awaiting burial (it is why he was able to recreate them with such precision). He learned too the harshness of life, the confusing truth of his sexual orientation, and the vagaries of living in Italian states that went to war with the same frequency and glee with which they sat down to a vast meal.

Michelangelo was an ardent patriot to his Tuscan lands, and took part in the many revolutions that plagued the city, pulling on his loyalties to the Medici and the city in a gut wrenching struggle. He became both adored and vilified by the popes of the Catholic Church, heartbroken by both men and women, and though he was forever surrounded by great friends, talented colleagues, and lovers, he remained a solitary man, rarely speaking of what he felt most deeply.

And yet, in all that I learned of him, as he became for me not the subject of my work, but a living, breathing being with whom I spent many hours of many days, it was his intellect and his vulnerability that touched me the most deeply. It has been one of the great delights of my life to ‘spend that time’ with him while crafting The King’s Agent. And I am thrilled to be including him in my current work in progress, but there he is a younger man, in the throes of artistic and personal awakening, feisty in his arrogant youth.

Michelangelo’s list of works is breathtaking, astounding, too vast to be accounted for here, and he is considered to be one of the greatest artists of all time. He was a sculptor, painter, architect, engineer and poet. His best known work, that of the paintings on the ceiling and the altar wall of the Sistine Chapel, catapulted him into the realm of the immortal icon, and yet it was his other work, that with the stone, creations like the great David (originally called the Giant), with which he cared the most, with which he identified. Were one to encounter the painter of the Sistine Chapel and ask him what he did, he would answer forthrightly, “I am a sculptor.”

The relationship between the lead male character, Battista della Palla—a true historical character—and Michelangelo is as I’ve drawn it within The King’s Agent, one of emotional succor of the most innocent kind, a bond between an older and younger man of a father and son nature, each yearning to fulfill the emptiness and lack of the one, each more than willing to fulfill that emptiness for the other. It was, perhaps, the most long lasting and satisfying bond of the magnificent Michelangelo’s life. The love they bear for each other is just one of the many reasons for the love I bear them both.

Posted by Donna Russo Morin at 9:36 AM