Notes on a Novel: To Serve A King 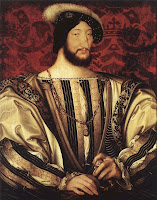 When writing François I, I was not unmindful or blind to his brutish youth, however I was deeply aware of the personal hardships he encountered—the loss of spouse, the loss of beloved children, the slow torture of watching his own power diminish as he aged. In the major biographies read during my research, I found a great dichotomy between his early years and those in his latter days. I was struck by the notion, and the hope, that we have the ability to become truly conscious beings and in the clarity of vision such consciousness affords, we can look back and see the road behind us with all its potholes and wrong turns. It is distasteful to have regrets—the acidity sticks in the craw and repeats offensively—but if conscious of their power as tools, the enlightened can use them to find remorse, and it is in remorse that we are redeemed. Thus was how I found François; it is how I wrote him. I can say with certainty there was a wish in such a rendering.
Posted by Donna Russo Morin at 12:01 PM