THE MONUMENTS THAT COSIMO BUILT

No discussion of Cosimo de' Medici, the Elder, would be complete without an homage to his commitment and worship of magnificent architecture. Francesco Guicciardini wrote of Cosimo in his The History of Florence, "His generosity, especially over the construction of buildings, was not that of a citizen but of a king."

The tour begins at the Palazzo de Medici itself. It has been said that the phases of the palace, mirror those of the great city in which it resides, marking out the important stages of its development. As the financial holdings of the family grew, Cosimo's ancestors purchased and moved the family to a quieter part of the city, to the broad and serene Via Larga (now known as the Via Cavour). The residential road, only recently constructed, flanked the eastern border of the largest of the sixteen districts of the city, the gonfalone del Leon d'Oro. In the beginning, the family occupied a series of adjacent houses, small structures Cosimo felt could be vastly improved upon.

Though a major sponsor of Brunelleschi, Cosimo chose Michelozzo di Bartolomeo as the artchitect when construction began in 1445, rejecting Brenelleschi's design as 'too lavish and magnificent,' fearing the envy of the citizens Cosimo served. Taking ten years to complete, the palazzo--as it stood then--was an example of the newest of construction. Purely cube in shape, it combined the traditional material (pietra forte: fine-grained sandstone and rustication) with the new concepts of the Rensaissance, where each story was visibly defined and a big cornice was topping off the roof border. The hard Doric columns and the arcades of the courtyard, with its respective asymmetrical entrances, situated at the corner of the ground floor were built from the prototype of palace’s courtyard created by Michelozzo's illustrious teacher, Filippo Brunelleschi, in the 15th century. Since then, and for more than a century, the palaces of the highest Florentine families were, for the most part, designed in the Palazzo Medici style.  The result was a projection of austerity and grandeur in harmonious coexistence. 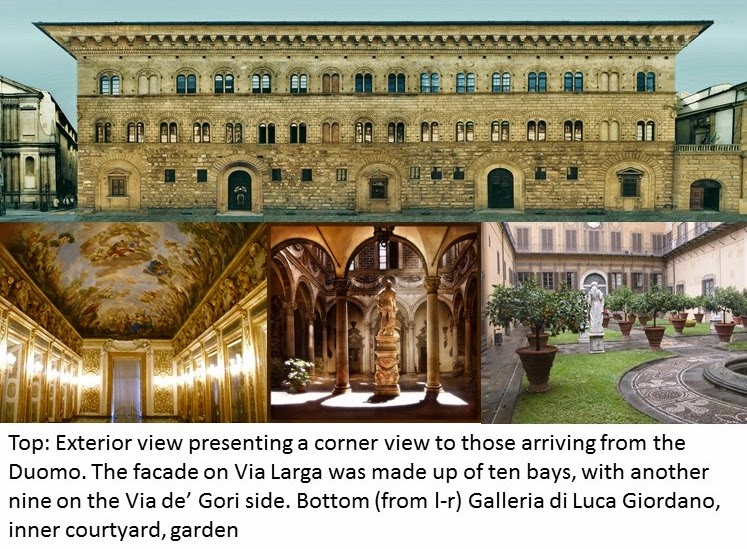 Of great importance to the prominent families of Renaissance Florence were their family chapels. Though San Lorenzo began as a project of the city, with claims of being one of the oldest cathedrals in the city, its humble origins, built in 393, sat outside of the then less encompassing city walls and was considered the city's cathedral. When rebuilding, begun in 1419, came to a halt due to financial problems, Cosimo took over. Brunelleschi's design, with grey pietra serena columns, gives a cool, airy quality to the interior. The bronze pulpits (circa 1460) are Donatello's last work and depict the Resurrection and scenes from the life of Christ; from these pulpits, Savonarola used to preach his hellfire-and-brimstone sermons. A fresco by Bronzino depicting the Martyrdom of St. Lawrence (1569) is a Mannerist study of the human body. Inside Brunelleschi's geometrically precise Old Sacristy, there are eight tondi (circular reliefs) by Donatello depicting the Evangelists and scenes from the life of St. John.

Despite its history, the building is seen as one of the great examples of the new style. Its more notable features include: the attempt to create a proportional relationship between nave and aisle (aisle bays are square whereas nave bays are 2X1);  the articulation of the structure in pietra serena (Italian: “dark stone”); the use of an integrated system of column, arches, entablatures; a clear relationship between column and pilaster, the latter meant to be read as a type of embedded pier; the use of proper proportions for the height of the columns; the use of spherical segments in the vaults of the side aisles.

There are significant problems in the design, most, however, occur at the level of detail. Giorgio Vasari thought that the columns along the nave should have been elevated on plinths. That the pilasters along the wall of the side aisles rest on a floor that is three steps higher than the nave, is also considered an error.

San Lorenzo is the burial place of the Medici, in what are called the Medici Chapels which you enter into through the back of the church, and are considered by some as the grandest portion of the Basilica. Giovanni di Bicci de Medici was the first to be entombed there and the family was still paying for its latest renovation when the last member of the family, Anna Maria Luisa de Medici, died in 1743. 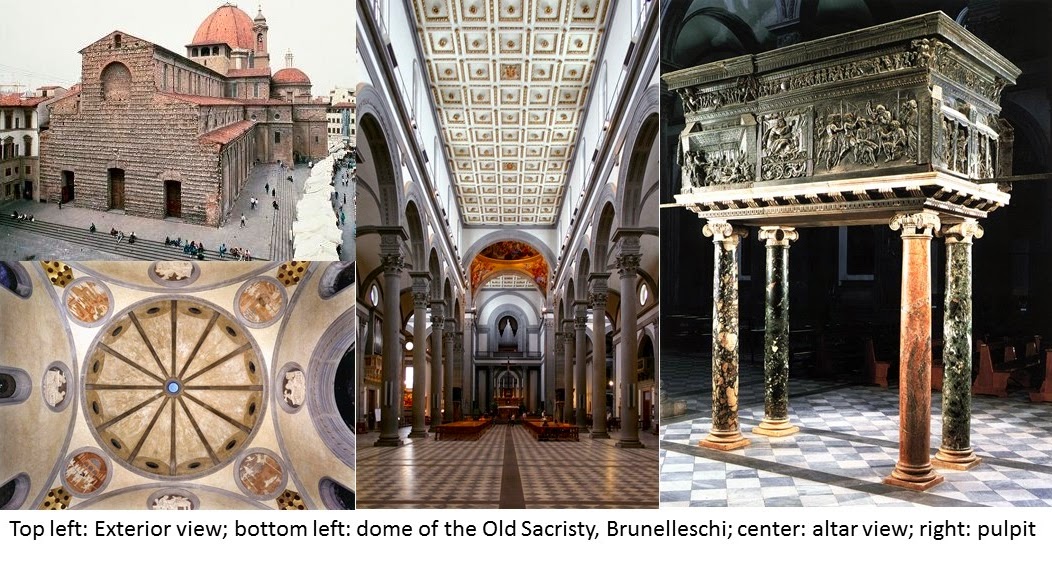 This former Benedictine convent, the Badia at Fiesole, which was partially rebuilt by Cosimo the Elder, a regular resident here, accommodates a Romanesque church. Its initial façade with its geometric designs in green and white marble was incorporated into a later façade which was never completed. The cloisters are representative of the style inaugurated by Brunelleschi. The first cathedral of Fiesole was situated lower down the hill than the present one, and had been built, according to the tradition, over the site of the martyrdom of Saint Romulus of Fiesole. In 1028 the present cathedral was founded by Bishop Jacopo the Bavarian to replace it, as he wished it to be inside the city walls. 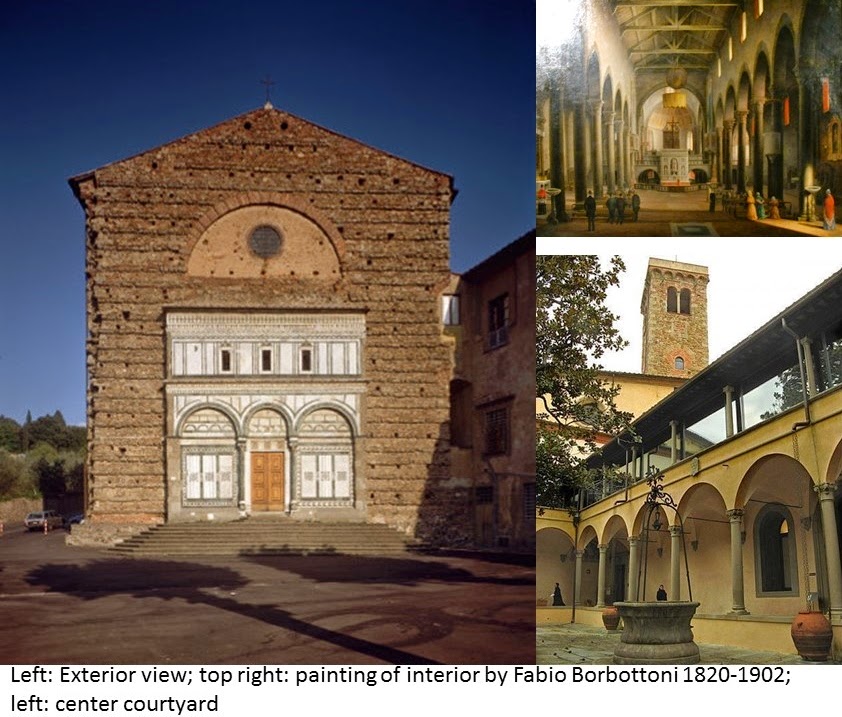 Though these are but three of Cosimo's architectural contributions, there were still more, in fact he built outside his own country, even in Jerusalem; and his buildings were not only sumptuous and expensive, but constructed with supreme intelligence. It could be said that Cosimo de' Medici not only financed the Renaissance, he helped to build it.