PRAISE FOR BBC AMERICA'S
THE MUSKETEERS

As a confirmed Francophile, someone who spent a great part of her life immersed in the works of Alexandre Dumas, and then spent a year and a half researching and writing a novel about the Musketeers (The Courtier’s Secret), I applaud BBC America’s latest portrayal of these famed soldiers, The Muskeeters. As the opening credits announce, the show is based ‘on the CHARACTERS’ of Dumas. Such a statement gives them the license to play a bit loosely with the history of the age, which the writers do, but nowhere near to the degree that some of the other period series of late (The Borgias, Da Vinci’s Demons) have done. What they have captured perfectly—through the writing, the casting, and the direction--is the marvelous essence that is The Musketeers. It is replete with breathlessly handsome dashing men, subtle yet sarcastic wit intrinsic to Dumas’ characters, and well-written episodes bursting with the action and adventure that originally defined these tales and why we cherish them as classic stories.

For the first time D’artagnan, portrayed by Luke Pasqualino, has been
cast with the coloring appropriate to his Gascon heritage (dark hair, dark eyes). Pasqualino possesses the youthful innocent charm so distinctive to the character. Athos played by Tom Burke is sufficiently gloomy and a forthright leader in equal parts, Howard Charles gives Porthos the perfect amount of snarkiness and forever honorable and to-the-death warrior that he was, and drenched in besotting masculine sensuality, Santiago Cabrera plays Aramis as he should be (women want him, men want to be him).

In Constance, both the writing and the casting have taken a slightly different turn; Tamla Kari is not an exquisite beauty (though she is quite lovely) that we’ve come to know (i.e. Rachel Welch), nor is she the damsel in distress as she has been forever portrayed. And yet there is something wonderfully compelling in this version of the most important female in these tales. The other significant female role, that of Milady de Winter, has not yet coalesced (by the second episode) enough and she appears—thus far—a bit gratuitous. Maimie McCoy’s rendition of this character, and what the writers choose to do with her, will need watching.

By far one of the best inclusions is the stronger and more involved character of Captain Treville, played by Hugo Speer. Though his role in the Dumas’ original tales is small, his influence—most especially upon the young D’Artagnan—is vital to the Musketeers, to their code of honor. Hopefully this character will find more attention in this BBC America version.

But, as with the books, the true captivating core of these stories is the bond between these four men and the playful, lascivious, and always—always—devoted, determined, and honorable lives they lead. We are swept away by their chivalry, their prowess, and their beauty. As with any historical FICTION allowances have to be made in terms of story in order for a great fictional story to be told. In the case of BBC America’s The Musketeers, it is a very, very small price to pay for delightful entertainment.

All for one, and one for all! 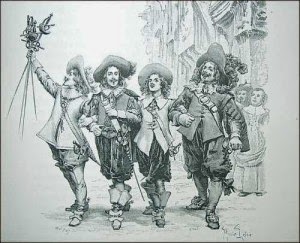