I'm thrilled to have been tagged by the lovely Kate Quinn in another blog hop, this one ingeniously titled “Meet My Main Character.” As my current work-in-progress is a bit on the hush-hush, I’ve decided to highlight the main character in my latest release, The King’s Agent, which received a starred review in Publishers Weekly. It was also the first book of mine to feature a male protagonist. For me, it was love at first sight.

What is the name of your main character? Is he/she a fiction or a historic character?
His name is Battista della Paglia, a factual character whom I found while conducting research for my third book (To Serve a King). That book featured Francois I who was obsessed with acquiring the best art of the age. Battista was his agent, ‘the king’s agent,’ in Italy, ‘acquiring’ Raphael’s, Botticelli’s, da Vinci’s and, of course, Michelangelo’s by any means necessary. 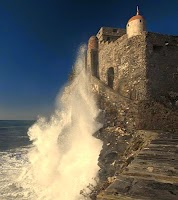 When and where is the story set?

The story is set in 1527, just before the great sack of Rome, as the forces of France, the Vatican, and the Emperor Charles maneuver for control of the peninsula. Battista's home base is Florence, but because the story is, at it’s core, an art quest, the reader is taken on a trip throughout the middle and northern portions of Italy. (These pictures are the actual places that exist that I used in the book.)

What should we know about your main character?
Battista was a true-to-life Indiana Jones of the early 16th century, smart, witty, and fearless. Yet his letters and his poetry reveal that under his rogue exterior, he feels emotions deeply. He was a dear friend of the aging Michelangelo, with whom he had a life-long father-son type of relationship.

What is the main conflict? What messes up his/her life?
When we first meet Battista, he is charged by Francois I to find a piece of art—a sculpture—which Francois believes will give him great strength in battle, an artifact that may possess other-worldly powers. But in his quest, Battista encounters Aurelia, a fictional noblewoman with secrets of her own, secrets which may or may not aid Battista in his quest. This enigmatic woman comes to affect Battista greatly and his loyalties become torn while his quest grows ever more dangerous.

What is the personal goal of the character?
Though on the surface Battista appears to be no more than a common thief, his motivation shows the true honor of the man. The agreement made between Battista and Francois I was done with the acknowledged condition that should Battista’s magnificent Florence, a homeland he worships, were to come under attack, Francois would help defend her militarily. But with Aurelia, her secrets, and her growing hold upon Battista’s heart thrown into the equation, what he truly needs to do becomes very muddled.

(Note: there are two other questions in this hop that pertain to a work that is not yet published; as mine has been, those questions have been omitted.)

And now to the amiable authors who have agreed to participate, I tag:
Heather Webb
Margaret Evans Porter
Stephanie Lehmann

Pay them a visit and watch for their posts in a week!