Excerpts: The Effortless and the Arduous Vol. IV: CREATING A MULTI-LAYERED CHARACTER

I believe strongly that there is no such thing as the ‘perfect’ hero and that there exists no completely evil villain. But creating characters with pale hints of their dark and light sides is often the most intricate writing an author must craft; there is, after all, a fine line between love and hate. But, with one my degrees—psychology—and a complicated life of my own, there are two absolutes that I have learned that I put to use in each and every one of my books: we are very much a part of what we have experienced and we most assuredly have a choice to live by such influence, or break free from it.

Geneviève Gravois, the main character in To Serve a King, is a perfect example of a highly complex, many layered character. Here I offer an excerpt that gives a glimpse into this multifaceted enigmatic personality.

Knocking with one knuckle, Geneviève entered the dark, cavernous room. Diffused light from gaps in the curtain were too feeble to reach the high vaulted ceiling or the far corners of the large and stately room. The cherry wood panels and deep maroon wall and bed coverings brought more gloom upon the somber chamber. The silence hummed and Geneviève tiptoed into it, having no care to disturb it.

As she neared the bed, she spied the small mound of her aunt beneath the heavy covers and the large form of the black-gowned physician propped in the chair beside her. The bitter scent of illness mingled with the aroma of herbs in the stifling room in dire need of an airing out. Surely, a tiny bit of fresh spring air would do the dying woman no harm, Geneviève thought as she neared her aunt, but she kept such thoughts to herself. She gave the doctor a nod and he returned her solemn greeting with a silent, seated bow.

Geneviève approached the bedside and leaned forward, thighs brushing against the hard mattress upon which her aunt lay. The woman’s sharp features were hidden in the dimness, but as Geneviève’s eyes adjusted to the gloom, the familiar pointy nose and jutting chin became visible. Though death marched near, there was little softness to the bony face, as if the woman greeted it with the same stony demeanor in which she had spent her life. Thin gray strands of hair lay on the pillow and thin, papery lids lay closed over her eyes.

Lengthy minutes ticked by but the woman remained motionless. Believing her asleep, Geneviève began to creep backward to the door.

“Leave us, monsieur.” The warbled voice both startled and commanded.

The large man rose from his chair and left the room without a word, passing Geneviève, rooted to her place. It had been a test, yet another; she should have known. Her whole life had been a test, one administered by this woman with a cold, stern hand.

“Are you ready? Has everything been taken care of?”

“Oui¸ ma tante. It is all prepared as instructed.”

With tremendous effort, the feeble woman lifted her head off her pillow, thin arms pushing at the mattress as she tried to raise herself up. Geneviève rushed over, taking her aunt by the shoulders and boosting the frail woman up, pulling the pillows into a heap to support her. With a sideward glance that was neither grateful nor pleased, Elaine acknowledged her niece’s assistance.

Geneviève felt her teeth grind, then released the reaction. All her life, she had tried so hard to please this woman. From her earliest memories, she had done everything asked of her. No matter how difficult, no matter how heinous, she had done it all in the hopes of eliciting some affection, any sign of tenderness, from the only mother she had ever known. But even now, as they were about to part for what may well be the last time, there was no offer of affection, not a morsel of sentiment extended from the woman who had raised her.

“In the table, there.” Elaine pointed one bony finger at the credenza along the mullioned windows. “Open the top drawer and bring me what you find.”

Geneviève did as instructed, retrieving a large velvet pouch, and placed it upon her aunt’s lap.

Untying the satin cord, Elaine reached in. “These are for you.”

The first item drawn from the bag was a book, bound in Moroccan leather with gold embossed letters on its spine: Pantagruel, François Rabelais. Geneviève accepted the book and opened it, turning the whisper-thin pages tipped in gold.

“He is the man’s favorite author, and this the most popular work of the moment. No one will question that you carry it with you always, and you must never let it out of your possession. This book holds the key. Comprenez-vous, oui?”

Through the long hours of lessons, of learning the languages and the ciphers, Madame Elaine had been a hard taskmaster, never once responding to the child’s exhaustion, or revulsion. She had watched with implacable neutrality as the woodsman held the small furry animals, as the young girl sobbed while exterminating them. Nor had she praised Geneviève as the young woman endured hours of lectures and mind-altering persuasion, completing each new assignment with ease, as she translated the most complex of ciphers, as she slaughtered and butchered animals without a second thought. 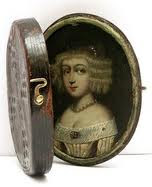 Elaine reached into the pouch once more. The locket hung on along golden chain of delicate links that tinkled together as her aunt dropped it into her palm.

“Open it,” the elderly woman commanded.

On each side of the open oval locket were the pictures of two faces, at once familiar, undeniably related.

“Your grand-mère and the woman who raised you. If any should question your lineage and your allegiance, we are the patent of your heritage.”

Geneviève stared at the small painted faces; the physical likeness was undeniable. She wondered if their temperaments were the same as well, if her father was the same type of person as her aunt.

It had not taken Geneviève long to understand that the coldness of this woman’s heart ran to her very core; it was not an assumed state adopted in order to coax more work from the child. It was who she was. This woman had found little chore in teaching the child to have an emotionless demeanor, for she owned it completely.

As a curious adolescent, Geneviève had tried to find out how Madame Elaine came to be who she was, but no matter how tentatively she broached the questions, no response was ever forthcoming. Geneviève would leave knowing as little about her aunt as when she came.

“Take the last one out yourself.” Her aunt held the black bag out and Geneviève took it, squaring her shoulders against the shiver. She clasped the small square shape her fingers found and brought it forth.

She knew the face at once.

“It is the king, François I.” Geneviève heard it herself, the slightest tinge of distaste in her voice.

“You cannot react like this, girl.” Old and dying though she may be, the noblewoman could still bark a forceful command.

Geneviève assessed herself, finding her shoulders and shapely top lip curling upward. With an inward breath, she relaxed both.

“Who is in the picture, Geneviève?”

“He is the king,” she repeated, her voice ringing with respect. “François I.”

Thrusting her chin up, Geneviève looked her aunt square in the eye. “He is my king. My one and true king.”

For a moment the women’s gazes locked, the teacher’s scouring the student’s. All of a sudden, the old woman broke the connection and her body slithered down the pillows. All strength had left her. Her job done, her life’s work complete, there was nothing remaining to hold her to this world. She would wallow in her illness until death came calling.

Geneviève waited, hating herself for the expectancy she felt in her heart, for one word of fondness to mark this leave-taking. Her aunt closed her eyes and turned her head toward the windows.

Chiding herself for her foolishness, Geneviève turned toward the door.

“You will tell him, won’t you?” The voice faltered and its vulnerability stopped her, drawing her back.

“Tell Henry, make sure. Tell him I have done my duty well.”

That the parting words between them would be of King Henry came as no surprise to Geneviève.

Having just watched The Last of the Mohicans over the weekend, I think I have to disagree--there are fully evil characters. Magua is one such in that book and film--and he's terrifying. Iago in Othello is another such. And I suspect Regan and Goneril in King Lear also qualify. But within that realm, the hard part is making such characters credible--and with the Shakespearean ones, it's interesting to watch how they couch their evil in the appearance of goodness or at least amiability at the outset of the plays.

I completely accept that there are many characters--true and fictional--that are evil to the core. My contention is...how did they get that way; what in their past brought them to a place of such darkness. And it is in that moment of conversion that there was, or could have been, a person free from evil, or at least one of vulnerability.