Excerpts: The Effortless and The Arduous Vol. I

Lately I’ve been very fortunate to meet/Skype with many book clubs, one of the loveliest benefits of my chosen profession. As this question—what was the hardest/easiest passage to write—seems to almost always crop up during the discussions, I thought I would make it a recurring post on my blog.

This passage from my latest release, To Serve a King (recently named as a Finalist in the USA Book News Best Books Awards), was one of the easiest for me to write. I love to write action scenes; the words flow fluidly from my mind. What more, this particular scene allowed me to achieve many things in a short amount of words: it revealed a dark side to my main character and added an additional threat to her already tenuous existence.

The tapers were nothing more than nubs in their pewter and bronze candlesticks, and yet the release of sleep had not blessed her. Geneviève thrashed in her bed as she had all night, the linens no more than a tangled, knotted mess. She sat up and threw them off in frustration. She quit the bed and its dissatisfaction with a huff. The generous chamber she had been so grateful for when she had arrived at the château had become a confining prison cell, and she needed to escape it. She threw a laced silk cloak about her shoulders, pulling its concealing hood over her jumbled blond hair,and flung open her door.

Out in the dark corridor, Geneviève pulled up, hovering by her door, looking down the long, abandoned passageway, thinking twice about wandering the castle in the middle of the night. The silently plodding pages had extinguished most of the wall sconces, as they did most nights, but here and there a few lone flames cast weak and wavering light. She could fell great beasts with a single arrow shot, gut and clean them, cipher and decipher the secrets of a nation, and yet fear of darkness remained hidden in her depths, as if she were that small child, abandoned by parents so cruel as to die, unloved by an aunt who claimed filial connection but offered no affection.

Geneviève pushed herself away from her door and crept along the hall in her thin slippers. She needed a drink, a powerful draught of heavy wine or brandy to slay the beast of her thoughts, to quiet it long enough to allow her some peace and somnolence. Perhaps she would find a poultice left on the stove to steep, to ease the pain splitting her head in two.

She found no one in the kitchen save two scullions, asleep in the ashes of the hearth, but gratefully located a full bottle of eau de vie and, though fruitier than her tastes preferred, she threw back a large gulp, satisfied by the immediate trail of warmth burning from throat to gullet. Geneviève made to steal away, thought again, turned and grabbed the whole bottle off the stained sideboard, and slipped out of the quiet room, the low crackling fire the lone witness to her thievery.

As she crested the landing of the second flight of stairs, the effects of the powerful beverage struck her; the tingle of relaxation nipped at her fingertips. She longed for her chamber now, and the small goblet that would bring her another portion of the fluid. Geneviève turned to the right—and froze.

The scuffling step came from back around the bend. All her senses were alert. She dare not turn, dare not stay, and she began to move forward once more. But the shuffling continued, inching closer. If the footsteps belonged to another insomniac, Geneviève mused, he or she would make no great pains to keep their presence concealed—might, in fact, look for company when a night’s somnolent embrace refused them.

Geneviève drew closer to the next corridor, the one leading to her chamber. She could not allow her pursuer to follow her there. Geneviève slowed her pace, as if she strolled without a care, humming a lulling tune low in her throat. She put her hand in her pocket and withdrew it, opening her clasped fingers.

“Oh dear,” she murmured idly, looking down at the tile floor in front of her as if she had dropped something. She bent her knees and squatted down, her nightgown and cloak ballooning around her. In their concealment, she reached beneath the fabric and pulled her dagger from the sheath strapped to her leg. With the small weapon hidden in the palm of her hand, she rose again and continued on, turning the corner that would take her to her room.

Once beyond the edge of the wall, Geneviève threw herself flat against the stone and waited, allowing herself no more than a shallow breath, fearing to give her presence away. The furtive footsteps grew closer. She braced her left hand on the wall, raised the right with its drawn dagger.

Like a hunter intent upon its prey, Geneviève caught the scent of the body, one of muskiness and herbs, before she saw it. Every muscle clenched in readiness. The form crept round the bend. Geneviève stepped out and grabbed. A half second of fumbling, a squelch of surprise, and she grabbed a throat, squeezed and pushed, forcing the hooded form back against the wall. With her left forearm against the interloper’s neck, Geneviève pinned the intruder to the stone with the tip of her dagger.

Two cold, bony hands fought against her, but they struggled ineffectually.

“Who are you?” Geneviève hissed and, with the dagger still in hand, used her palm to push back the concealing hood.

She gasped at the pale face, the white eyes gleaming out at her, releasing the tension of her hold in shock. Madame Arceneau lunged forward, trying to take advantage of the opportunity.

Geneviève recoiled and pushed back again, thudding the mystic’s head against the wall, holding the tip of her weapon to the woman’s vein-threaded throat. The sharpness of the misericorde—a battlefield weapon used to end the life of a mortally wounded enemy with merciful swiftness—nipped at the thin skin.

“What do you want of me, woman?” Geneviève felt the creatureof hate and anger that lived in her raise its head, so quiet it had been of late. This woman and her strange eyes brought it out like a randy chevalier in a roomful of virgins.

“I’ve come to tell you the truth.” The childish voice struggled through the hold upon her throat.

Geneviève pushed the small woman harder against the wall. “Then tell me if you dare.”

The mystic bared her teeth at Geneviève. “You are the beast I saw. I know you are up to no good.”

A flash of fear and revelation squeezed at Geneviève’s gut, but she swallowed it back. This woman was nothing if not clever; those eyes may not see the future, but they saw everything else,and the rest she inferred. But inferences were not enough to be hung upon. 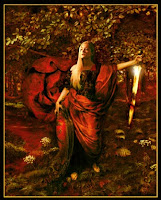 Madame Arceneau lowered her inhuman gaze to stare down at the dagger point sticking into her ribs. “You will kill.”

Geneviève sniggered from between clenched teeth. “That is not a particularly intuitive assumption at this juncture. Now is it, madame?”

“Not me,” the soothsayer sneered with impatience. “Another. One of high importance.” She leaned into the dagger, taunting, her face closing toward Geneviève’s. “A royal.”

Geneviève felt her teeth gnash and the ache in her jaw as the muscles hardened. “And what’s to stop me from killing you now …from silencing you and your nonsense forever?”

“It is all written down and entrusted to my greatest ally.” The fin of flesh hanging from the center of the fortune-teller’s throat wobbled as she spoke. “It will be delivered to the duchesse should I meet with an untimely demise.”

Geneviève’s hand squeezed the handle of the dagger until it shook. Visions of the woman’s slit throat oozing her life’s blood were brilliant in her mind’s eye. She lowered the weapon.

“Money,” the mystic said with a sickening smile, “and a home of my own, one on the rue de Turenne.”

Geneviève raised her eyes to the coffered ceiling. “You’re mad. I have no such funds, no such influence at court to get you such things.”

Madame Arceneau would tempt fate and Geneviève’s hesitation no longer. She stepped away from the wall, sliding off down the dim, empty corridor like a ghostly specter wafting along on its nightly haunting.

“Then you had better find a way.”