“Progressing” through France in the 16th century with François I was unquestionably one of the most rewarding aspects of writing my third book. These were the places of fairy tales and though I was unable to visit them all in person, the ingenuity of virtual travel allowed me unparalleled home access.

When one speaks of the palaces of France, the first to rush to mind for both opulence and magnificence must be the Chateau Versailles. But in 1515, when François took the throne, Versailles was no more than a small castle surrounded by an even smaller town, known mostly for its church and abbey, a hamlet that suffered greatly from both the plague and the Hundred Years War.

The kings of the Renaissance were enamored of Progresses: the movement of the court through the kingdom during times of good weather. These journeys were mammoth undertakings, requiring more than a hundred men to coordinate the move, to arrange the transport of what was tantamount to a small-sized village, and close to twenty thousand horses to pull or carry. But a Progress in France led these impressive caravans to what are still considered today to be some of the most magnificent palaces in the world. 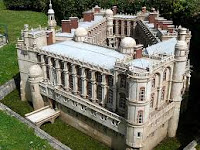 The Château Saint-Germain-en-laye (http://www.musee-archeologienationale.fr/) began as a modest castle, built by Louis VI around 1122, but it was not until the reign of François I that the palace achieved its grandeur. An oddly shaped citadel, Saint-Germain boasts fifty-five apartments including seven chapels, a grand ballroom, a prison, and thirty kitchens. Its chief innovation, and most distinctive characteristic, is its terraced roof. Constructed of large, super imposed stone slabs, the supporting edifice needed to be reinforced with large buttresses. These buttresses, held together by long iron-tie bars, gave a crown-like effect to the appearance of the chateau, an almost feminine chapeau to a most imposing structure.

In this stunning palace, Emperor Baldwin II of Constantinople presented Louis IX with the relic of the crown of thorns in 1238. Here Louis XIV, the great Sun King, was born in 1638. And here, Napoleon I established an officer training camp.

Marrying his second cousin Claude just months before ascending to the throne, François acquired not only a bride, but one of the most splendid palaces in the country, the Royal Chateau of Blois. It was here that Joan of Arc had stopped to have her soldiers take Holy Communion before launching into battle. Indulging in his fascination with architecture, the young king began renovations from the moment of acquisition, construction that continued till the death of the queen in 1524.

Located in the resplendent Loire Valley, François began what would become his very famous library at Blois, beginning with the volumes of great import handed down to him from his parents. The library, which was to grow exponential over the course of the king’s life, became the foundation for France’s famous Bibliothèque Nationale.

Replete with secret passageways, vaulted stone hallways, and marble floors, one of the most distinctive architectural features of the palace is the unique exterior staircase, in itself, a great work of art. At the time of its construction, it became the talk of France. Spiral in shape, each landing included an area that allowed one to stop and look down upon the common below. From here, courtiers and nobles often stood, as if from a balcony, and pay audience to performances and tournaments that took place in the courtyard. The exterior of the staircase was equally as remarkable, festooned with a sculpted garland of crowned salamanders, the king’s symbol.

After his first wife’s death, François rarely returned to her childhood home.

At the beginning of François’ reign, the Louvre was no more than a decrepit medieval fortress without a courtyard. Against much opposition, the king began the renovation of the palace that would become one of the most widely known structures throughout the world by demolishing the medieval keep. The primary construction would span more than twenty years, coming in spurts and starts. The king moved his residence to the Louvre for a time, beginning in 1528, though the earnest renovation work did not begin until 1546. François, a consummate art collector, began his acquisition at an early age, housing the majority at the palace that would become, some contend, the world’s grandest museum.

Though Louis XIV would spend much of his childhood at the Louvre, raised austerely by his mother, Anne of Austria, and her closest advisor, Cardinal Mazarin, Louis left for Versailles not long after reaching his age of majority, never feeling comfortable within its grandiose walls. At the Louvre, the neglected child had endured the trauma of the Fronde, an uprising of nobility that brought them pounding upon the doors with swords and pitchforks and calling for the death of the royal family. In what could only be deemed a turn of utmost augury, Louis’ move allowed the Louvre to become a residence for artists.

The Louvre Museum has a highly interactive website, which can be found here http://www.louvre.fr.

When King François told his courtiers that he wanted to go home, it was to Fontainebleu they went, for nowhere else, especially in his latter years, did the king feel as comfortable, for indeed there was nowhere else as enchanting. Even the derivation of its name holds the enchantment of a fairy tale. The myth contends that a spring and its presiding goddess were discovered in the forest of Brie by a hunting dog name Bleu and the site, washed by the spring, became known as Fontainebleau, the fountain of Bleu.

The Fontainebleau Castle experienced eight centuries of continuous royal residents; one of the few in the world with such a lengthy distinction; Capetian, Valois, Bourbons, Bonaparte, Orleans…all called the palace home for a time. It was here that François, of the House of Valois, called the greatest artists to his side; it is here that many say the French Renaissance began. 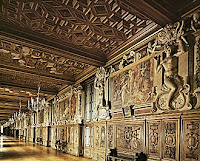 One of the largest royal compounds in the country, the palace and its grounds is a virtuosity of architectural genius, evidenced nowhere more than in the Gallery of François I, the first great gallery built in France. This masterpiece, with its frescos framed in stucco by Rosso Fiorentino, would become the quintessential prototype for the Galerie d’Apollon in the Louvre and the Hall of Mirrors at Versailles.

The website of the Château de Fontainebleau (http://www.musee-chateau-fontainebleau.fr) offers yet another highly interactive, virtual experience.

It is said that France cannot be France without its greatness. The country is a lyrical, magical place; its people poetic and passionate. And for centuries untold, the French have learned to capture that lyricism, the poeticism, within the walls of a splendid palace.