Chivalry: Dead or Alive...Where did it come from?

When the word “Chivalry” crops up two things quickly come to mind. For many women in the modern era, it is considered a form of respect and courtesy that is a rarity to be found in society. That issue aside (for it is one that I am neither knowledgeable enough or familiar enough with to discuss without anything but snide acrimony, at which I am highly adept), I consider it a privilege to write of eras where the word had true and abiding meaning. 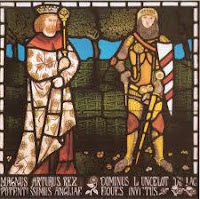 The second thought…the most profound image…to jut into the mind is that of King Arthur and the Knights of the Round Table. In actuality, the genesis of chivalry can most readily be traced back to France, Spain, and Italy. The word itself derives its etymology from the Old French chevalerie or knighthood, based on the eleventh century chevalier, ‘knight’. Continuing backward, both words find their root in the Italian cavaliere, and the Spanish caballero; all designating a warrior on horseback. There was little of the modern definition of chivalry in these men, save their honor. Dedicated to their military goals these men were, no doubt, a rough bunch, highly adept with sword, lance, and shield. In these inception days, the military ethos was mostly profoundly religious and soon the concept of a ‘knight of Christ’ swept through their ranks. This ‘religious chivalry’ gained both popularity and momentum during the Crusades. It was during these religious wars, when men killed men in the name of God, did a code of behavior—a moral, religious, and social code—come to be associated with knightly conduct. 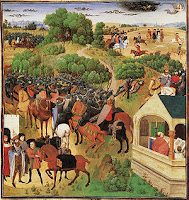 As the twelfth century became the thirteenth, these rank of soldiers—confined to the noble classes for mostly economic reasons—followed chivalric conventions dictating that they should honor, serve and ‘do nothing to displease ladies and maidens.’ It was during this age, the Middle Ages, that the mythology of chivalry grew and swelled and became the legends we revere today through popular literature.

La Chanson de Roland, The Song of Roland, follows the exploits of Roland, a courageous knight in the age of Charlemagne. But the most famous work and legend of all is, of course, Le Morte D’Arthur. There are few lasting stories of knights and chivalry as that of King Arthur, whether it be those of the true compilation of tales as told by Sir Thomas Malory, the equally as popular T. H White’s The Once and Future King or the completely commercialized Camelot as made dashingly famous with Richard Harris as King Arthur. Arthur, his knights, and his round table have become the iconic symbol of chivalry. 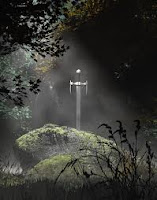 As wars became far less honorable and far more gritty, the elegance of knighthood found its place on the tournament grounds. One can’t help but wonder when perusing the profusion of material on the subject, if the men who fought in these horrific battles, did not need the grace of chivalry to erase their own torturous memories or if society itself wanted to believe in the watered down concept of what war truly was. As an ‘imitation of a past ideal illusory’, Johan Huizinga wrote in The Waning of the Middle Ages (1919), that he found chivalry ‘to be representative of true culture means to produce by conduct, by customs, by manners, by costume, by deportment, the illusion of heroic being, full of dignity and honour, of wisdom, and, at all events, of courtesy.’

‘And, at all events, of courtesy.’ If this is the ideal of chivalry, perhaps it is indeed one worth aspiring to, for us all, especially in these most trying of times.