To Galileo with Love: Excerpts: The Effortless and The Arduous Vol. 2 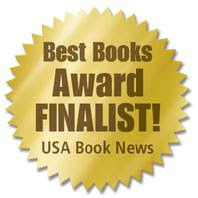 I recently learned that my 2010 release, The Secret of the Glass, finished as a finalist in the USA Book News Best Books of the Year contest. It is, of course, always an honor to receive such an accolade. But it was especially true to receive it for this book. It was a story I connected to on a very personal level, due, in large part, to the presence of Galileo. To consummate the celebration, I offer an excerpt from The Secret of the Glass, one which celebrates Galileo's triumphant moment:

The diverse group of men gathered at the base of the campanile. They turned toward Pasquale and nodded or waved in greeting. Many of the faces looked familiar though their names remained elusive; she had seen them before, dressed in council robes at the Ducal Palace.

One face leapt out at her, one whose name jumped readily to her tongue. She knew every detail of the countenance; the chiseled contour of the high cheekbones, the long slim nose, and the full lips. It was the face that haunted her dreams. Teodoro Gradenigo stood head and shoulders above the others, his long, lithe shadow stretching out across the herringbone patterned pavement stones, reaching out to her. What was he doing here? Was he a friend to da Fuligna? The questions exploded in her mind, making her dizzy with possibilities. She shimmied back further into the shadows, her harsh breathing echoing back to her in the arched tunnel.

Pasquale quickened his pace. He returned the group’s greetings, rubbing his hands together as if relishing the moment. After a few short snippets of conversation, their heads spun in unison toward the palazzo.

Sophia sucked in a gasp of air as she found the object of their attention. Heading toward the assembled group strode Il Serenissimo himself, dressed in civilian clothing, accompanied by three other men—a friar in a roughly hewn cassock, Signore Sagredo, dressed to the hilt, as always, and Professore Galileo, carrying a long, slim leather satchel.

Fear thrummed in her veins, not for herself, but for the endearing scientist. What business would da Fuligna have with him? Was he a threat to the man and his important work? She found only more questions where she craved answers. Her hands pushed against the still cool stones at her back, as if she could push the professore away from any impending danger, real or imagined.

The base of the square brick monolith was less than a hundred yards away and the men’s voices carried in the constant breeze blowing inward off the ocean, toward Sophia and her hiding place.

“We are ready, signore,” Doge Donato said to Galileo after acknowledging the obeisance of the group. “Show us.”

“No, no, Your Honor.” Galileo pointed to the green and white rooftop and the pyramidal spire topped by the golden archangel Gabriel over nine hundred meters above. “When you can see clearly, it is best to ﬁnd a place where there is much to see.”

A few of the men appeared skeptical, the older ones in particular, but all of them followed the Doge through the narrow door leading to the interior and the hundreds of stairs within.

The men disappeared into the bell tower and Sophia set off at a run, lifting her skirts off the ground, heedless of the surprised smattering of shoppers milling about the mostly empty piazza, scattering the hundreds of pigeons who lived within the square into the sky, the abrupt ﬂapping wings loud in the peaceful quiet. She threw herself up against the brick wall next to the door and listened as the voices drew away from the entrance, echoing up the conﬁning staircase of the campanile.

For the love of God, what are you doing?

The frantic thought ﬂashed through her mind, but she gave it little consideration, she couldn’t. If she did, the fear would paralyze her completely.
Waiting impatiently for a scant few seconds, she stole a furtive glance inside and saw only a narrow brick-walled opening—barely wide enough for two averaged-sized men to walk abreast—and light gray, uneven stone stairs leading to a narrow landing. The ﬁrst ﬂight of stairs was empty; the group had ascended the landing and turned the corner.

With a deep, fortifying inhalation, Sophia entered the small foyer and began the almost inconceivable climb to the top. She paced herself, not moving too quickly, making sure never to catch up with the men ahead of her. Their grunts of exertion echoed down to Sophia, their intensifying body odors lingered behind and mingled with the stone dust released into the air, disturbed by their footsteps. So many in the group were slow with age, trudging up step after step, stopping often to inhale deep draughts of air with rattling breaths and to wipe the perspiration off their brows and hairless heads.

Higher and higher they climbed, slower and slower they moved.The sun rose in the morning sky and the meager light from the small rounded windows at each landing ﬁltered into the staircase, the dust dancing in its glow. Sophia crested another ﬂight, turned another corner, her own young and healthy heart thudding against her chest. An unobstructed beam of sunlight found her, and she crouched low, back into the shaded pit.

The group arrived at the top. Sophia slunk up the last ﬂight of stairs on her hands and knees, keeping close against the cold stone, covering the front of her gown with the gray, sooty dirt.

Peeking above the uppermost step, she peered furtively into the square landing above. The last of the men to reach the pinnacle clustered together, leaning upon one another in an exhausted group, holding each other up as they caught their breath.

Sophia lunged, using their huddling, groaning mass as a cover, sneaking past them to hide behind the farthest and largest bell. Within the safety of its unlit silhouette, as her own ragged breath slowed through quivering nostrils, Sophia looked around. Her full bottom lip lowered in unfettered astonishment. Though she had lived in this land, passed by the tall base of this obelisk all her life,
she had never hurdled its stairs, had never seen this magniﬁcent architecture waiting upon its zenith. 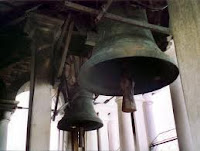 The rounded peaks of the belfry’s white stone arches created symmetrical shaped shadows upon the large dado supporting the spire and the ﬁve intricately wrought bells of varying sizes. Sophia had heard their melliﬂuous tones all her life—they were the music of the passing years. She hid behind La Marangona in the northwest corner, the largest bell of them all. Named for the carpenters of the land, the marangoni, its deep clang began and ended the workday. La Trottiera called magistrates to meetings and the Pregadi the senators to their chamber, while La Nona announced mid-day. The smallest—called Renghiera by some, Maleﬁcio by others—whose high haunting tones made the cittadini cringe, announced executions.

“Over here, if you please, Your Honor.”

Sophia heard Galileo’s call and stole a stealthy peep around the curved edge of the bell. Diagonally opposite from Sophia’s position, he stood in the southeast corner of the tower, beckoning the Doge to join him, and extracting a strangely shaped device—long and circular—from his bag.

The other men swarmed around them against the parapet, their hair dancing in the buffeting, powerful wind of the lofty altitude, their low murmurs and questions tripping over one another.

Galileo held one end of the lengthy, round cylinder up to his left eye and pointed the other end out toward the lagoon.

“My God!” His cutting whisper, like a fervent prayer, silenced the quizzical, conjecturing voices around him. Without another word, he offered the instrument to the Doge.

Galileo sparkled as a dumbstruck, enraptured smile spread upon his face, like a man who had seen his newly-born child for the ﬁrst time. 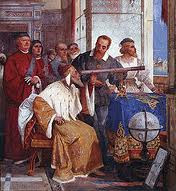 Donato took the device and held it up to his eye, mimicking Galileo’s posture, pointing it out to the glittering ocean. The large man jerked back his head as if struck, and thrust the tube away from his face. The attentive men gathered around him came onguard, heads spinning about searching for the threat, hands drawn to hilts. The Doge’s large, horse-like face turned to Galileo, probing the scientist with his questioning glare.

“Yes, yes, it is real.” Galileo’s long beard quivered from his chin. He smiled with childish joy at Sagredo and the priest who stoodclose beside him.

The Doge shook his head as if to deny the man’s words, but put the instrument back to his eye.

“Holy Mother of God.” Donato’s breathy whisper ripped the expectant silence to shreds. “It is a miracolo!”

Sophia forced herself not to crow aloud, forced back the joyous laughter that bubbled within before it could forsake her hiding place behind the large bell. She knew what this device was, why this group had gathered upon this tall summit. Galileo had ﬁnished his creation, and from the shock upon his face and that of the Doge, it worked stupendously.