A Palace for the Ages: Le Louvre

In To Serve a King and next year’s The King’s Agent, much is mentioned about Francois I’s obsession with acquiring the eras greatest works of art, as well the artists. In each case, I credit Francois and the lead factual character in The King’s Agent, Battista della Palla, with launching the collection that would become the superior compilation of masterpieces now housed in the magnificent Louvre. But what of the palace itself? 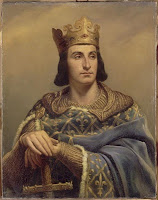 In the late 12th century, Paris was Europe’s biggest city, blossoming under the forty-three year reign of King Philippe Auguste, as did the monarchy’s own power and influence. But such greatness is often accompanied by jealousy and other rulers of the day coveted the city as they would the world’s most beautiful woman. Before leaving for the Crusades, King Philippe had a rampart built around Paris. To reinforce its defenses, the king erected a fortress as well; the high walls and imposing edifice constructed along the right bank of the River Seine formed an imposing edifice and protection for the city’s populace. That fortress came to be known as the Louvre, the name most credibly noted as deriving from the Latin Rubras, meaning ‘red soil.’

In those early days the single building structure was used as a prison, armory, and a royal treasure stronghold. Round bastions stood at each corner and at the center of the north and west walls of the mounted quadrilateral measuring seventy-eight by seventy-two meters. In the south and east walls, defensive towers flanked narrow gates.

By the 14th century and the inception of the Hundred Years War, even greater defenses were called for and construction of an earth rampart was prompted by 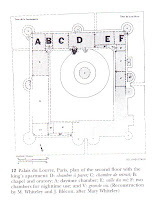 Etienne Marcel, provost of the merchants of Paris. The work was completed under Charles V. With the addition of this rampart to the city’s defenses, the fortress became superfluous and it began its transformation into a royal palace. With much of the design work by architect Raymond du Temple, the fortress became resplendent with ornately decorated rooftops, elaborately-carved windows designed to bring more light into the structure, and interiors sumptuous with paneling, tapestries, sculptures and other works of art. The grandest addition, the grande vis, was a breathtaking staircase adorned with sculptures of the royal family.

After the death of Charles V in 1380, the renovation of the Louvre slowly ceased, the country’s coffers diminished by the strain of war and the plethora of other royal residences requiring upkeep…la Bastille, Vincennes, Fontainebleau. The work honoring the magnificent structure known as the Louvre would not again be honored until the reign of François I.

What came first…François’ love of art and his need for a fitting palace in which to flout it, or a magnificent palace longing to be festooned by resplendent art? When the king, returned from years of imprisonment in Spain, scarred—physically and mentally—by resounding defeats on the battlefield and in the political arena, he decided to make the Louvre the official royal residence and the true renovation of the medieval fortress began. François found the castle dark and airless, much like the rooms of his prison, which no doubt instilled an even greater need for restructuring of the mansion he would call home. The great tower was destroyed and the medieval fortress gave way to the Renaissance palace. 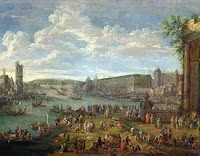 This demolition marks the true turning point of the essence of the palace, as the old gives way to the new, as the king eradicates the west wing and replaces it with distinctly Renaissance style structures designed by Pierre Lescot and decorated by Jean Goujoun. The encompassing renovation began in 1546, but Francois’ death a year later would find the work continued by his progeny.
And continue it they did, with great relish. Under Henri II and his son, born Charles IX, ruling as Henri III, the palace was transformed. A new façade, the King’s Pavilion, and a new dungeon overlooking the Seine are but a few of the major points of the renewal 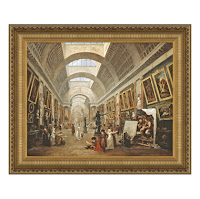 As regent to her son Charles IX, Catherine de’ Medici had the Tuileries Palace constructed, a pleasure palace which remained unfinished as her relish for luxury emptied the kingdom’s coffers. Henri III directed work on the Little Gallery, a jumping off structure for the connection between the two buildings. Under his son, Henri IV, The Grand Hall, built between 1595 and 1610 was constructed along the water that directly connects the royal apartments at the Louvre and ending at the Pavilion de Flore of the Tuileries. Stretching 450 meters, the Grand Hall is crowned by the Hall of Kings on the floor above.

The assassination of Henri IV by Ravaillac, a religious fanatic, put the expansion on hold for many years, until his son came to reign. Under the ‘modern’ Louis kings, more demolition of old buildings would take place and the Louvre compound would expand four fold. But the trauma Louis XIV endured while within the walls of the Louvre—a cold and ignored childhood, an attempted coup by the ranking nobility—turned him against the palace and toward Versailles, where the French royalty would live out the remainder of their usefulness. 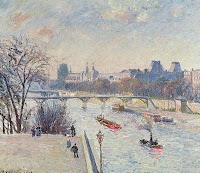 For more than a hundred years, from 1670 until the French Revolution, the Louvre served not only as the state cultural and learning center, but as a city for artists and their families. It is during these years that the palace makes its most important transformation, into the artistic mecca that it is today, officially becoming Le Museau Central des Arts in 1793.

Today the Louvre is the largest art museum in the world, housing approximately 35,000 pieces of every medium, art of such a precious nature that, during both World Wars, the French government removed all its masterpieces and hid them. To this day, the hiding place is unknown to all but a few chosen members of the French government...should the need for its secrecy ever arise again.

And in the walls of this royal bastion, in between the stones and the bricks and the marble and the splendor that is the Louvre, resides the history of a nation and the passion of its kings.