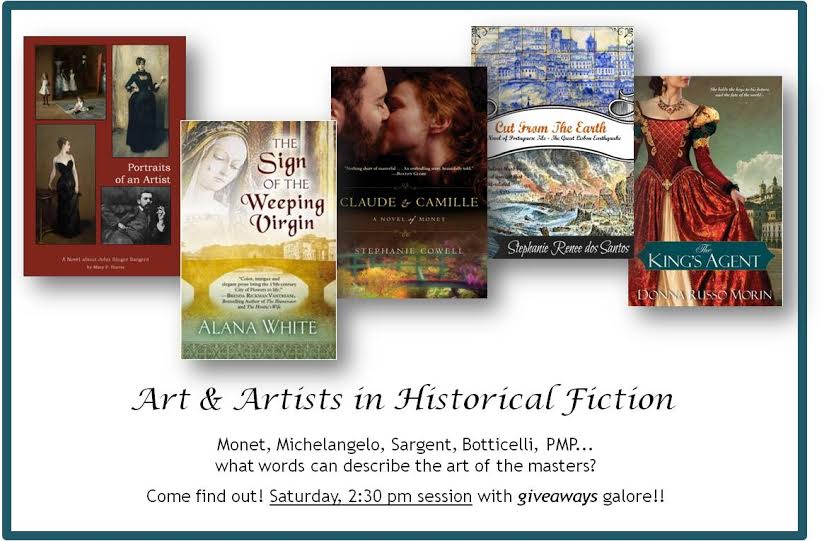 We love art. We love artists. We love art history. We write about art, artists and history. Art-based historical fiction is an expanding and exciting niche in the historical fiction genre. At this year’s Historical Novel Society Conference in Denver, June 26-28, writers Alana White (The Sign of the Weeping Virgin), Donna Russo Morrin (The King’s Agent), myself Stephanie Renee dos Santos (Cut From The Earth), Mary F. Burns (Portraits of An Artist), and Stephanie Cowell (Claude & Camille) came together to share our collective wisdom on how and what special challenges arise when writing about art and artists and what to keep in mind when delving into the world of the creative arts. A special thanks to the forty writers who attended our discussion. We hope each of you left with something to aid and enhance your stories!
Here’s the recap of the writing points we covered at the panel-talk: 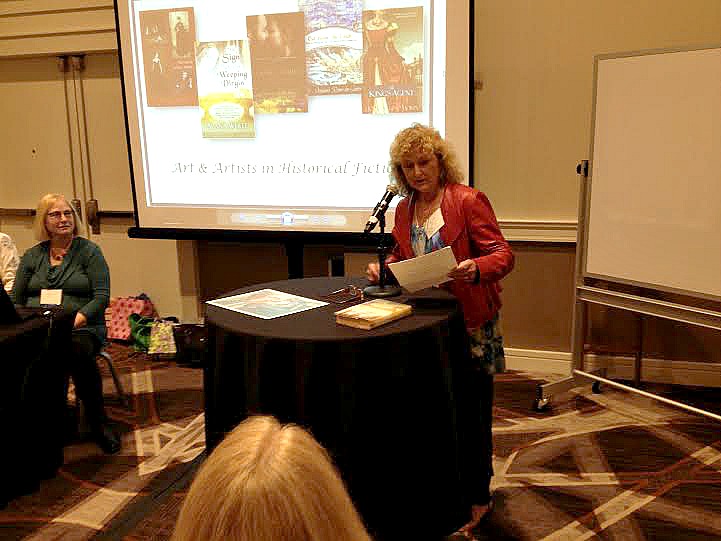 Alana White:  “Using art to advance the story in action and dialogue.”
In The Sign of the Weeping Virgin the setting of this historical mystery series is the Italian Renaissance when my protagonist, lawyer Guid’Antonio, conducts investigations for the powerful Medici family.  In the novel, the young ruler of Florence, Lorenzo de’ Medici, asks Guid’Antonio to investigate two mysteries for him. One involves a weeping panel painting of the Virgin Mary, the other centers on a missing girl. While there is considerable art in the narrative, it is Sandro Botticelli’s fresco of Saint Augustine that provides the clue to solve the mystery of the young woman who has disappeared.
Since this is a mystery, I wanted to “plant” the clue that enables Guid’Antonio to solve the riddle four times. While painting the “Saint Augustine” in Guid’Antonio’s family church, Botticelli overheard some young monks arguing among themselves. Amused, he recorded four lines of their dialogue at the top of the painting in the scribbled lines of a geometry book. (Restorers discovered the lines while cleaning the fresco in the relatively recent past.)
Is Brother Martino anywhere about?
Brother Martino just slipped out.
Slipped out where?
Through the Prato Gate for a breath of fresh air. 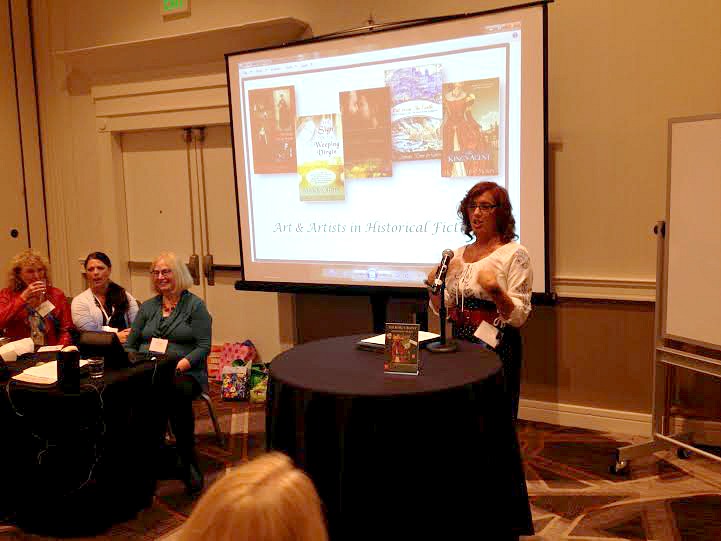 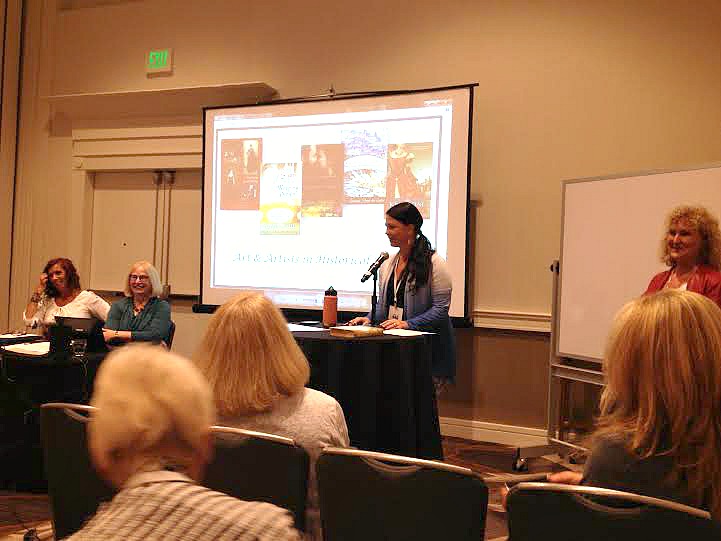 Stephanie Renee dos Santos:  “Use of artist space to depict action in story – moments of crisis and conflict.”
I elucidated this point with excerpts (condensed versions shared here) from my forthcoming novel Cut From The Earth, the story of an empathetic Portuguese tile maker, Piloto Mendes Pires, who risks everything to save slaves and escape The Great Lisbon Earthquake of 1755 that ushers Portugal into a New Age.
Example 1:  Chracter Conflict
The back alley door slammed open as Rafa picked up a large rolling pin, double the size of a baker’s.
In stormed Senhor Guimares, the owner of the nearby Red Clay Tile Factory. His dark mustache quivered on his flushed face.
“Where’s Padre Piloto?” he demanded.
Piloto peered down through the floor’s grid. He remained quiet, waiting to hear what he’d come for.
“Hand me the template,” Rafa said to Jawoli calmly. Rafa placed the 14 x 14 metal template on top of a flattened slab of clay, and began cutting tiles out with a knife.
“I asked a question you ignorant peças!” Senhor Guimares bellowed. “Where is the Padre!?” He shook his index finger at them.
Piloto cringed. He rushed to the stairway. How to deal with this man?
Senhor Guimares stomped by the kilns and over to where the men worked.
“Who’s in charge?” he demanded, his mustache now twitching. “Comer o pao que o diabo amassou! I’m speaking to you!” Sweat ran down his temples and dripped onto his pressed linen shirt, taut on his keg belly.
Rafa put the scoring tool down and stared coldly at the intruder. “Padre Piloto.”
Example 2:  Crisis
A jolt shot through Piloto’s body, ejecting the tile from the tong’s grip. It shattered on the floor. He dropped the iron-tongs. They clattered upon the shards. Barrels of chalky glazes shook, their thick soups boiling over their rims, mixing paddles churning in the vats. The viscous substances ebbed and flowed down the sides of their holding containers: manganese-browns, copper-greens, cobalt-blues, iron-oxide oranges, creating an amalgam of colors on the ground.
Rolling pins fell off counters, and ricocheted end-on-end before congregating in a pile, next to the vats. Dried goat balls the size of peaches filled with liquid glaze vaulted to the floor, glaze paints squirting out their nozzle ends. Buckets of paintbrushes careened, the brushes scattering like plucked feathers. Work pedestals spun. Small glass jars of pigments vibrated across tabletops; others wobbled off, exploding. Water spilled from barrel containers, housing gooey slip used to join clay pieces, and formed puddles on the floor’s low spots. The holding tank of white iron-oxide cracked down the front, its contents oozed out. Stacks of clay blocks toppled, hitting the floor with loud thuds.  Pails of wires, paddles, anvils, and ribs shimmered off back shelves, while the shelves themselves threatened to pitch forward.
Piloto dashed from spot to spot, arms outstretched, catching items and picking up others.  He filled his arms.
What is going on?
The earth heaved again, a second more severe shock, a violent undulating ocean wave. 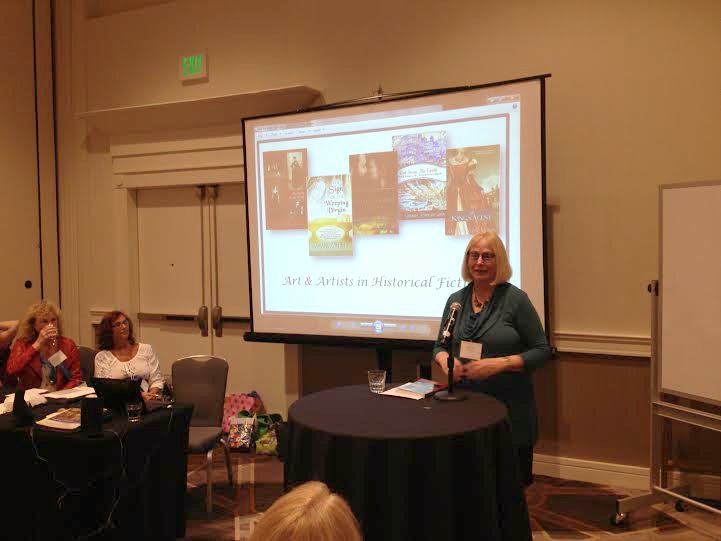 Mary F. Burns:  “Seeing and thinking through the eyes and heart of the artist.”
A question for all historical fiction authors is: Do you have to be a (Fill in the Blank) in order to write about one as a character?  Lawyer, Doctor, Midwife, Artist?   No, but it helps if you have an affinity for the work that person does, and of course, you have to understand how that kind of person thinks, feels, sees, understands, communicates.
I learned enough about how John Singer Sargent painted—his style, his technique, his preferred media—to be able to realistically portray him in his studio and as an artist.  He was very expressive and entertaining for his sitters—he fed them, played the piano and sang, dashed around the room with a cigar in his teeth, laughing and telling jokes.
But away from the canvas, I learned from biographies, he had a hard time with words, found it difficult to express himself, a very private person, genial, kindly, energetic. He loved light and shadow, as most painters do, and having a complicated personality himself, he wasn’t averse to showing both the lighter and darker sides of his subjects.”
However, he denied that he consciously depicted the “psychological” state of his subjects, said he “merely painted what was before his eyes.” But even his closest friends said otherwise. If he simply accurately painted what he saw, then it must be that our feelings, our principles, our character and background and griefs and joys are written upon our bodies, because that’s what appear in his portraits, which is why ultimately, I decided to write my novel with fifteen different voices telling the story,  the voices of people who sat for portraits by Sargent, some of them dear friends, some one-time clients, but all providing different perspectives and clues as to who Sargent really was. As Oscar Wilde said, “Every portrait that is painted with feeling is a portrait of the artist, not of the sitter.” And Sargent definitely revealed himself through his portraits.
* A special thanks to Mary for creating our artsy book trailers for the talk!
(All except Stephanie Cowell’s which was made by her talented son!) 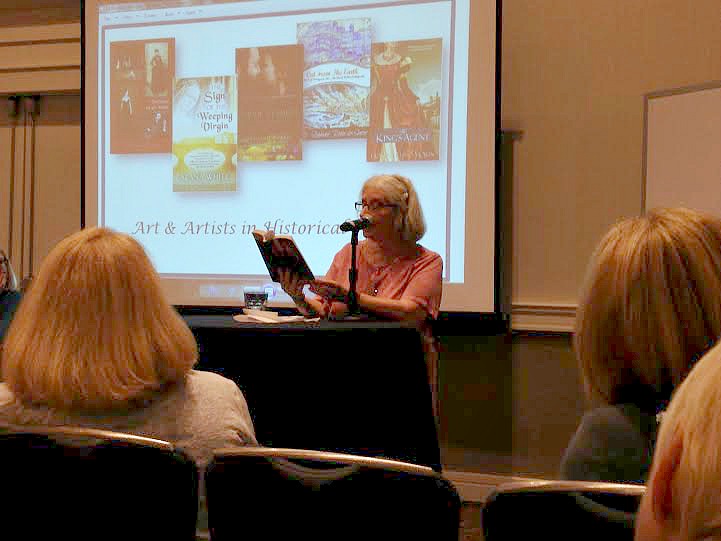 Stephanie Cowell:  “How much artistic ‘process’ to reveal in scenes – when is enough enough?”
You cannot write truly and deeply about anyone’s work (be it laundress, cellist, teacher, or painter) without showing them doing their work yet you must be careful how you write this. I try to reveal the work of my protagonist in scenes in which he is also living his life.  In the panel, I read a scene where Monet has a fight with his wife, rushes off to paint to calm himself and loses track of the hours; when he comes back to his actual life, having been gone for a long time, he finds something bad has happened. So there is a contrast between the ecstatic, all-consuming hours of his painting and the relatively ordinary needs of the people he loves.  In the case of an artist, the art is indivisible from the person. But the language of any profession is unique to that profession and you can’t go so far into the way an artist works that you confuse the reader with terminology. You also can’t have so much of the creation of art that you lose the plot tension. But you can’t ever just say that someone is anything without showing how it affects everything, even the aches in his body. Painting ruled Monet’s life; if he felt it didn’t go well he would be in total black despair and you couldn’t go near him. So you have to show that. Art was so huge for him it was like being drunk; it affected everything in him and everyone to whom he was close.
For the Love of Art in Historical Fiction!
To find out more about each author, their books, and to purchase their art-based historical novels:
Alana White:  www.alanawhite.com
To buy:  The Sign of the Weeping Virgin
Donna Russo Morin:  donnarussomorin.com
To buy:  The King’s Agent
Mary F. Burns:  http://www.sargent-pagetmysteries.blogspot.com/
To buy: Portraits of An Artist
Stephanie Cowell:  http://www.stephaniecowell.com/
To buy:  Claude & Camille
Stephanie Renee dos Santos: http://www.stephaniereneedossantos.com/

Posted by Donna Russo Morin at 9:06 AM