THE SON OF LA TIGRE, CATERINA SFORZA,
BRINGS A TITLE OF NOBILITY TO THE MEDICI

His parents were wed in secret, many thought of him as a bastard; he was baptized with the name Ludovico (named for a Sforza uncle); he was the son of one of the most famous and powerful woman of the Renaissance…and he became the first titled Medici.

Caterina Sforza’s son, Ludovico, was born in April of 1498; his father, Giovanni de’ Medici, died just five months later. When Ludovico, now renamed Giovanni for his deceased father, was still a baby, his mother was captured by Cesare Borgia and imprisoned in Rome, first in the Belvedere Castle then—after a failed escape attempt—in the Castel Sant’Angelo. During the years of his mother’s imprisonment, the care of Giovanni was entrusted to his eldest sister, Bianca Riario—twenty years his elder. Together, they sought refuge in a convent until the release of their mother.

Once more under the tutelage of his mother, in possession of her fiery, aggressive temperament, Caterina brought out the best and the worst in her youngest son. From an early age, Giovanni’s interests lay in physical activities and his training in military arts began in his youth. Caterina devoted herself to his education, attempting to instill in him the values of the Italian nobility of her family. The combination was deadly, but not for Giovanni.

At the death of his mother in 1509, Giovanni came under the protection of the Canon Francesco Fortunati and the wealthy Jacopo Salviati of Florence. Salviati did his best to keep the recalcitrant youth under control. It was a battle waged and lost. Salviati returned to Florence without Giovanni, who, though only 11, was left to run wild. Stories abound of his mischievous behavior in the Tuscany region…in Florence, in the Mugello Valley. His companions were the low, the peasants and the gangs of the area. Giovanni committed his first murder—most likely a gang killing—at the age of 12.

The act was too egregious for Salviati to remain impassive. He called Giovanni to Florence and soon brought the youth to Rome when Salviati was appointed ambassador to that city. But the change of location did nothing to curb Giovanni’s violent proclivities. Salviati sent him back to Florence and enrolled him in military academy, hoping to put Giovanni’s aggressive tendencies to good use. It was a wise choice.

Called to Rome by the pope, Leo X, Giovanni’s cousin—the son of Lorenzo Il Magnifico de’ Medici and Clarice Orsini—Giovanni first became a politiziotto, a policeman, in Vatican City. But it was not long before Giovanni’s military prowess found him greater position and power. In March of 1516, Giovanni became a military captain of a cavalry with no less than one hundred men under his control. His captaincy began with a trial by fire. During the War of Urbino, the pope commissioned Giovanni and his men to strip the Duke of Urbino, Francesco Maria della Rovere, of his title and his lands. So great was the might of this cavalry, they defeated the duke in a mere twenty-two days.

Perhaps his resounding victory did much to raise Giovanni in the eyes of his one-time protector, Jacopo Salviati. In 1517, Giovanni married Salviati’s daughter, Maria. But married life and the birth of a child did little to slow Giovanni down. 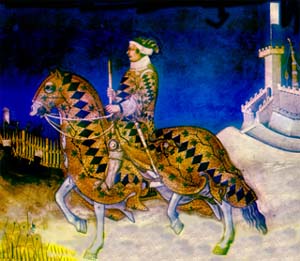 Now renowned as a great condottiero, Giovanni became a master at the new form of battle, creating masters of the men in his company. He instituted new methods of training, aiming for a compact, disciplined structure of offensive. Giovanni mounted his company on lighter, faster, quieter horses, making them lethal with stealthy ambushes. Even in regards to uniforms, Giovanni used thinner, lighter armor padded with black leather.

Giovanni’s training techniques were as intense as they were novel. Any man desiring entrée into his forces must already be adept at the use of weapons and combat on horseback. But that wasn’t nearly good enough for Giovanni. He pushed his men harder, made them deadlier. Those who excelled on the training field were rewarded; those who didn’t, those Giovanni called cowards and traitors were banished from camp, or worse, sentenced to death. His efforts did not go unnoticed or underutilized.

Giovanni and his men fought for Pope Leo against the French in 1521. In the same year, Pope Leo X died, a death that touched Giovanni deeply. In mourning and constant reverence, Giovanni added black stripes to his insignia, naming himself forever as Giovanni della Bande Nere (John of the Black Stripes). In 1522, he turned his weapons and fought on the side of the French. He then switched to the Emperor’s side in 1523 and defeated the Imperial and Swiss forces at Caprino Bergamasco in 1524.

Another cousin now sat on the papal throne, Clement VII, the once Giulio di Giuliano. Clement, still supporting his military cousin financially, ordered Giovanni to return his arms to those of the French. Giovanni did so in 1525. 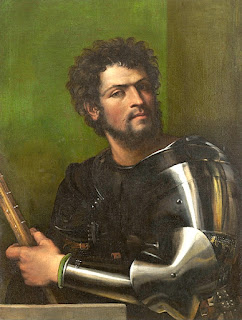 For this powerful, fearless man who made violence and war his life’s purpose, it was no great war or battle that brought about his demise, but a skirmish.

The War of the League of Cognac broke out in 1526. During an early scuffle, Giovanni was wounded in the thigh by a harquebus. Seemingly superficial at first, the wound refused to mend. With a few of his Black Band, Giovanni made for Venice and their superior physicians. Though he missed the famous Battle of Pavia, he re-entered the never-ending wars on Italian soil, appointed as Captain General of the Army Infantry Italian League.

On November 21, 1526, 12,000 German Landsknechts under the command of Georg von Frundsberg, marched on Venice, a force that had already overcome Venice’s Alpine defenses. Giovanni worked together with Francesco Maria della Rovere, Captain General of the League in Italy. Giovanni devised the plan…leave the French and the Swiss troops in front position while Giovanni and his Black Band, along with Rovere’s troops, rounded on the Germans, to attack from a different vantage point.

Rovere withdrew his troops under the onslaught of the Landsknechts in Milan. Giovanni and his band remained, attacking from the rear at the confluence of the Mincio and Po Rivers. His troops reigned triumphant, but not unscatched. 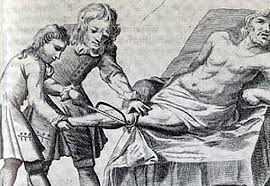 At the very end of the battle, Giovanni was shot by a falconet, a wound that was thought to have
shattered the femur in his right leg. Too much time passed as they transported Giovanni to Mantua and the home of his friend and fellow soldier Luigi Gonzaga. The delay rendered useless the expert treatment and eventual amputation of the limb by the renowned healer, Mastro Abramo.

His recovery is a moment captured in a letter from an eyewitness to the event, Pietro Aretino, who wrote to Francesco Albizi:

“Not even twenty,” Giovanni said smiling, “could hold me,” and he took a candle in his hand, so that he could make light onto himself, I ran away, and shutting my ears I heard only two voices, and then calling, and when I reached him he told me: “I am healed,” and turning all around he greatly rejoiced.

Giovanni did, indeed, stand again. But the gangrene—or septicemia—was unstoppable. Giovanni knew his end was near, but he would not leave this world in bandages. Pulling them from his leg, he broke free and laid upon a camp bed. There he died on November 30, 1526. 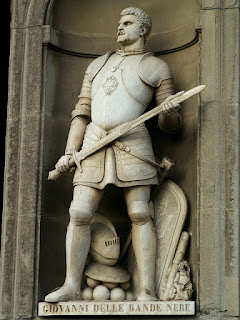 In 2012, Giovanni della Bande Nere was exhumed, along with his wife, in an effort to preserve his remains. The exhumation showed no breakage of his right thigh, where the fatal wound was supposedly located. The bones of the lower leg were removed, but the femur itself showed no damage. The most convincing theory is that the wound itself was not fatal, but its infection was.

Not long after Giovanni’s death, his mode of battle was rendered obsolete by the introduction of the mobile canon. For this reason, Giovanni’s death is the metaphorical end of the great condottieri of Italy.