There is perhaps nowhere on Earth more Christian/Catholic than Italy, the home of Vatican City. How surprising it is to learn, then, that the early Christmas celebrations, specifically those of the Renaissance, find their genesis in the fusion of pagan, Jewish and many other traditions. Despite claims by each contingent, it is near impossible to determine which came first: was it the Norse and the Yule Celebration, or the Jewish ceremonies of Hanukah, or perhaps it was the Continental Celts’ celebration of the Winter Solstice. Most certainly it was a combination of all these festivities, influenced just as strongly, and perhaps more notably, by those of the Pagans, those from whom the Christians absorbed many traditions and holidays, those they ultimately eliminated.

The two most prominent of the Pagan holidays to hold sway over the Renaissance Italians were Saturnalia and Mithra.

Spoken of in the Zend-Avesta, or sacred Zoroastrian scriptures, Mithra was known as the chief spirit, the ruler of the world, specifically, in the Zoroastrian he is delineated as "Mithra of wide pastures, of the thousand ears, and of the myriad eyes.” The scriptures continue to praise him as "the lofty, and the everlasting...the province ruler," Yazad (divinity) of the spoken name" and "the holy.” Ancient Romans as well as modern scholars trace Christianity’s origin to Zorastrian, for many reasons, the least of which is their physical location, for they hail from the land of Abraham and Daniel and many other Biblical figures. In fact, there is an abundance of evidence asserting the three Magi, or wise men--Balthasar, Melchior, and Caspar-- came from the land of Zoroastrian, according to a mosaic from around 500 A.D. from a church in Ravenna, Italy, to visit the Christ child.

After the 6th and 7th centuries, after the Assyrian conquests, the Greeks adopted Mithra, calling him the god of the Sun, categorizing him with Helios, while simultaneously the Romans integrated Mithra into their mythos. Enter Saturnalia. 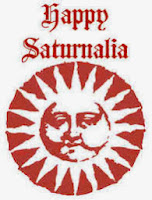 The holiday celebrated in December, beginning on the 17th and lasting until the 23rd, Saturnalia was the most popular of Roman holy days, paying homage to Saturn, the god of agriculture. These seven days were a blur of feasts, revelries, and intense merry making. Children were given gifts of wax dolls, a macabre reminder of the human sacrifices the ancients would make to Saturn. Other gifts included boughs of certain tress and other plants in representation of bounty and good harvest. As the ending of this festival coincided with the Winter Solstice, the merging of the celebrating of Mithra became a natural evolution, a celebration of the lengthening of days, a blessing from the sun god Mithra.

It is a fairly universal acknowledgement that Emperor Constantine and the Council of Nicea (the first ecumenical council held in 325 AD), in their efforts to stave off the warring between the Pagans and the Christians, to somehow keep both parties happy, landed on December 25 as the date to celebrate the birth of Christ, the true birth date of the Son of God (sounding so similar to ‘the sun god') is unknown.

In time, Christmas took the place of the pagan celebrations, though they cannot be said to be familiar to those of modern day. In truth, a more accurate representation of the events would be those found in Shakepeare’s Twelfth Night. The festivities began on the 25th and lasted until January 6, the Epiphany.

During the Renaissance, an era as characterized by the upheavals of the Catholic religion as by the enormous advancements in art, architecture, literature and the sciences, the festivities began to take on a more subdued mien. And yet, there is still much evidence of merrymaking, in the form of Mystery Plays, in which it is documented that the powerful and noble, such as the Medicis themselves, took part, playing the roles of the Magi. Gift giving honored the Magi and took place on the 6th of January.

The use of Evergreen mirrors the giving of boughs in the Saturnalia celebrations. 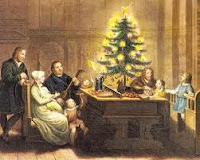 In addition, Evergreens, which in ancient Rome were thought to have special powers and were used for decoration, symbolized the promised return of life in the spring and came to symbolize eternal life for Christians. The value of evergreen spans a variety of cultures, including the Egyptians, Chinese, and Hebrews. The worship of trees was intrinsic to European druidism and paganism. In Christian tradition, trees were often put up in December to serve the dual purpose of warding off the devil and to provide a perch for whatever birds still remained. Evergreen trees decorated with apples and wafers were also used in Christmas Eve plays during the Middle Ages and into the Renaissance to represent the tree figuring so prominently in the tale of Adam and Eve. The first evidence for a decorated Christmas tree emerges from German craftsman guilds during the Renaissance. Trees enjoyed a surge of popularity among Protestant households after the Reformation as counterparts to the Catholic nativity scene.

Now such a divisive matter of controversy, nativity scenes (also known as manger scenes, or in Italian, Il Presepe) became a popular outward honoring of the season. The first recorded appearance was indeed in Italy, created by none other than St. Francis of Assisi in 1225. The preacher and friar created his presepe, a live one, with the precise intentions of bringing the emphasis of Christmas to the birth of Christ and not on gift giving (it would seem that greed crosses centuries). Nativity scenes are especially popular in Naples where hundreds are displayed every year.

And even in the Renaissance, Christmas was celebrated with the raising of voices, in faith and in hope: