JUST ANNOUNCED!
THE KING'S AGENT HONORED AS A FINALIST
IN THE 2013 USA BEST BOOK AWARDS
CELEBRATING WITH A GIVEAWAY! 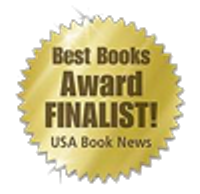 I am so delighted and honored to have my latest release, The King's Agent honored as a finalist in the historical fiction category of the USA BEST BOOK AWARDS sponsored by USA Book News.

In celebration, I'm giving away TWO copies of The King's Agent!

The contest is open until November 30 (opened internationally; winner announced December 3). You must follow and friend to qualify. If you're already a friend or a follower, complete the other to also enter.

I'm also posting one of the my favorite scenes from the book, starring none other than the great Michelanagelo. 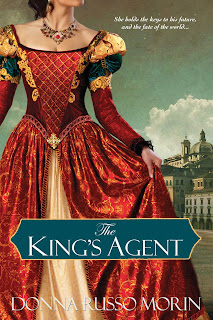 A rooster crowed in the distance, a raucous laugh at those who thought to stay abed, and the soft bells of morning called the faithful to mass. Aurelia snuggled into the stillness of daybreak, one unlike any found at other times. Dawn built a bridge for her, one out of her body, one allowing the stillness to enter her, to cleanse her thoughts of clutter.

Gliding down the stairs, slipping silently into the dark kitchen, she took a long draught of mulled cider and threw open the shutters, breathing in the unsullied lush air of a new day. Mourning doves cooed in the trees between the house and the studio, and Aurelia closed her eyes, letting the soothing sound fill her. Curling up in the well-worn stuffed chair before the window, she tucked the layers of her homespun gown beneath her legs. As the sun crept over the horizon, the enveloping blanket of light and warmth tucked her in.

The strange sound pulled at her, a low but insistent scratching. Aurelia struggled to open her eyes, so deeply had she fallen into meditation, the surface of consciousness lay far above.

Aurelia peered across the room through the hazy slits of her eyes and glimpsed Michelangelo, perched on a corner stool, almost hidden in the opaque shadows the room accommodated, hand flying furiously across the paper he hunched over, eyes jumping from her to the creation of her he conceived and back. She should stop him, but each stroke felt like a caress, as if he brushed her jawline with his fingers instead of rendering it with his charcoal. It was a wondrously soothing feeling, and she luxuriated in it, banishing all thought of consequence, allowing him—and the birth of the day—to continue without disruption.

Too soon the floor above them creaked as others in the household awoke; groggy, companionable voices passed outside the window as men made their way to the studio. The day had commenced against both their desires.

“No one will ever see it, donna mia,” he spoke without lifting his eyes, using the finest point of the charcoal now, making only the minutest movements with his hand.

She chuckled softly, but didn’t move. “Ah, so you know it is forbidden.”

Michelangelo shrugged one shoulder, but continued his work. “I knew when the vision came to me all those years ago in the Chapel. And I know it now. But my adoration will not allow me to stop.” He shrugged again. “Of course it is forbidden, or else you would not be on this quest, sì?”

He looked at her then, head cocked to the side, brow furrowing as his hand stilled.

“Why did you come? Surely there are others who would be, should be, charged with this task?”

Aurelia opened her eyes, calamitous thoughts barging their way into her mind; there would be no turning back, not for this day.

“You will think me frivolous and selfish.” She hung her head, unable to look him in the eye.

She heard his scuffling steps approach, found his kind face appear in her downcast gaze. Michelangelo knelt at the side of her chair, one hand taking hers, the other holding his parchment.

“I should not have a bad thought of you, Aurelia.” He breathed a laugh. “Who am I to judge one such as you? Or anyone, for that matter.”

“I came,” Aurelia found the words in his unconditional empathy, “for me.”

He tilted his head yet again. “Scusi?”

Aurelia patted his hand with a smile. “I had, of late, found the burden of my position difficult to bear, the isolation of it most especially, the terrible sameness of it.” Her smile fled. “I wanted to experience this life, not just be a witness to it, but the lighter side of life, not that of duty and responsibility.”

“The lighter side of life?” Michelangelo’s raspy voice fairly squeaked with incredulity. “And you have chosen this…this quest…to find the lighter aspect of life?”

Aurelia threw back her head and laughed with unadulterated delight. Michelangelo, jaw dropping for half an instant, joined her, dancing with her in the irony.

Their laughter flittered away, the lark on a soft spring breeze, and he placed her drawing in her lap and released his charcoal to the floor. Taking both her hands with his, he kissed them.

“You and those who will follow you have my heart, my fealty, and my silence, Madonna Aurelia,” he whispered his pledge with formality. “Now and forever.”

Tears came to her eyes; she found the feel of them strange. In all her years, she could not remember a moment so breathtaking, so heartbreaking, as to bring her to tears. Whatever the consequences of her impetuous actions may be, to know this man, to experience him and Rome and all he had shown her, was a joy worthy of it all.

“I ask but one thing.” Michelangelo lowered his forehead to the knuckles of her hand, voice muffled into the puffed and worn fabric of the chair arm. “That you bring no harm to Battista, to amore mio. That I could not bear.”

Aurelia sniffed a sigh, it was a difficult request, but one she had already pledged herself to. How much easier things would have been were Battista not the man he was, possessing such beauty, of every incarnation.

She picked up the parchment in her lap, studied the face so skillfully etched upon it, one so familiar and yet alien. “I must do whatever I must, but I can promise you no hurt shall befall him, least not while our lives intersect, for he is m…my love as well.”

She gave him a conditional answer, and she saw the edge of dissatisfaction in his honey-colored eyes. His throat throttled a swallow and his ethereal smile peeped out at her once more.

“I shall come with you, then, if I may,” he requested with a giddiness more suited to a child. “I would see the end of this, at least from Firenze.”

“A wonderful idea,” she assured him. “You shall be marvelous company on the journey. It will be well that you are near, once—”

“Buongiorno.” Battista popped his head into the kitchen, face bright with glee. “Frado has returned. We make for Florence.”

Just as quickly, he darted out, leaving Aurelia and Michelangelo warm in the wake of him. Michelangelo stood and took the parchment, gaze roving over it with a critical though pleased eye. As she stood and joined him, as they headed for the door, he stepped to the low house fire, no more than burning cinders not yet stoked for the day, and placed the thin drawing material upon the glowing embers.

They left the kitchen, Aurelia’s likeness turning to fluttering ash behind them.

congrats on your fantastic news!!

& thank you for the giveaway!!

shared giveaway on my FB wall:

That is incredible! Congratulations! The book look amazing!!!
angelarosebooks@yaoo.com