THE MEDICIS
AT THE BIRTH OF THE RENAISSANCE

There are, and always will be, moments in history in which the course of all life, as we know it, is affected…for the very essence of existence to undergo major changes that are ever-lasting. Such a one is the Renaissance. Many historians cite April 6, 1341, the date Francesco Petrarch was crowned Poet Laureate upon the Capital in Rome, as the birthday of the Renaissance. A movement that would last for nearly two hundred years, this period of ‘rebirth’ is marked by an evolution and a turning away from the medieval life of the Middle Ages, life and beliefs dominated by the church and its values. It is defined by an embracing—a rediscovering—of the humanism and its philosophical principles, those grounded in the times of the ancient Greeks and Romans. And nowhere was the power of this movement greater than in Italy. 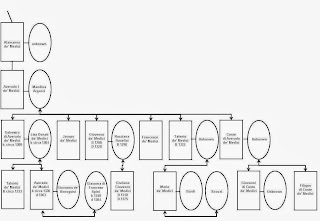 Such was the cradle into which the next generation of Medicis was born. And yet, due to the actions of their ancestors (specifically the revolt of the previous generation), their purpose was to heal the family wounds; they had not the time to embrace the new waves of thought sweeping their peninsula, but they paved the way for succeeding generations to do so with almost fanatical obsession.

Of the three branches sprouted by the first two Medici brothers to leave Mugello and make their home in Florence, Charissimo and Bunigunta, only one branch of the Medici tree is still alive, still thriving…that of Charissimo’s grandson Averado. And though this generation was born under trying circumstances, more than one made their mark and forwarded the prestige and power of the family.

Though there is more than one member who did little to bring individual distinction, they were, no doubt, part of the overall family efforts to redeem the family name and expand their holdings and business in Florence. Talento, son of Salvestro de’ Averado and Lisa Donato appears to have done nothing of note, including remaining unmarried and childless. Marco de’ Medici married twice, both times into power families, which could only have lent power to the rebuilding efforts of the Medici.

His first wife was a Bardi, a powerful banking family, owners of the Compagnia dei Bardi, this family, in conjunction with the Peruzzi Family Bank, lent England’s Edward III 400,000 gold florins. Edward defaulted on his debt, causing the collapse of the Peruzzi Bank. The Bardi family, however, continued to prosper, and played a notable role in the financial banking of the early explorers including Christopher Columbus and John Cabot.

Marco’s second wife came from the Strozzi family, a family whose history is deeply entwined with the Medici; from rivals to combatants to return once more to family by marriage.

The title of indisputable forerunner of his generation belongs to Giovanni di Conte de’ Medici, a great condottieri (soldier/knight) and statesman. The very lofty titles held by Giovanni include gonfaloniere (governor) of Florence in 1349, 1353, and 1356; vicario (vicar) in Pescia (a city in the Provence of Pistoia) in 1346; and podestà (police chef) of Prato in 1365. Giovanni carried out many a military and diplomatic mission outside of Florence, including Pistoia, Piedmont, Lucca, Sienna, and Milan. As Captain of the province of Muguello, a rank awarded in 1351, Giovanni, along with his uncle Salvestro, defended the Castle of Scarperia against Visconti siege. The next year finds him among the ambassadors in Naples sent by the Florentine Republic to pay homage to Queen Giovanna I. In 1355, this obvious type-A personality rode at the head of 200 Florentine Knights as the escorted Charles IV to Rome to be crowned Emperor. It is a wonder he had any time for anything else. And yet he did.

With his brother Filigno di Conte (who, though widely unknown would in 1375 pen a biography, Libro de Memorie, providing the world with valuable information on his family dating back to the 12th century) and his cousins, Giovanni saw to the vast property expansion of the Medici family. Between the years of 1335 and 1375, these men paid over 9000 gold florins for the purchase of 170 plots of land, much in the Muguello area, but not all. They purchased as well great portions of Florence itself. From 1348 to 1373, they acquired several houses and workshops in the districts near the Mercato Vecchio (the old market) and the Ponte Vecchio (the old bridge). At the time, they still lived in the area of the Mercato, as their family had for generations, where they also owned the Torre di San Tommaso and a loggia, but at some point in these booming years of acquisition, they decided to move the family to a palagio or palazzo on the Via Larga. In 1361, this generation of blossoming moguls bought the eleven remaining parts of the house (more accurately described as one complete side of the city block) to serve as the family headquarters.

For all Giovanni’s contributions to Florence and to the Medici family, including siring a son, his accomplishments would not turn out to be the most lasting.

One of the leading members of the family carried on two of their important names; Averado de’ Medici married twice. Evidence, or the lack thereof, of his first wife Giovanni de’ Bonaguisi, indicates an early demise; little is known of her and there were no offspring from this marriage. Averado’s second marriage proved more productive; while deeply entrenched in the efforts to raise the status of the family and acquire property, he and his second wife, Giacoma di Franceso Spini, gave birth to three children, a girl and two boys, one of whom will become known as the true father of the Medici fame and glory.