REAL ESTATE AND FINANCIAL MOGULS:
THE SIX BROTHERS OF THE MEDICI,
THE DONALD TRUMPS OF THEIR AGE 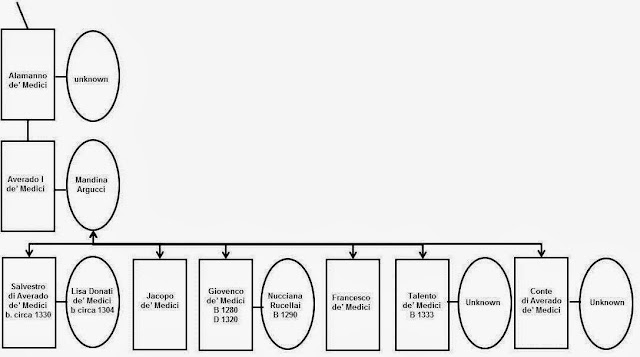 Tracing family heritage of a historically potent and important family is not as easy as one may think. As previously mentioned on numerous occasions, even in the case of the Medicis it has proven a daunting task. As with most ‘history,’ true records and expansive details begin with the family member who brought the family into the limelight. But were it not for the shoulders such a person stands on, they would start from the ground…from nothing.

In an effort to track down information on the brothers of Salvestro di Averado de’ Medici, who served as Florence’s envoy to Venice (see previous Medici post), very little could be found. It is documented that the vast property owned by their father Averado was divided evenly between the six brothers. Vast is a drastic understatement of the property acquired.

Over a sixty year period, this branch of the Medicis signed fifty-nine contracts, purchasing property in Villanuova, Campiano (a hamlet in the town of Cazzano of Tramigna), San Piero a Sieve (a commune in the Province of Florence), and San Giovanni in Petrolio.

While the previous Medici post told of the exploits of brother Sylvestro di Averado, little is known of his siblings. Of brother Conte, we do know that he married and served, on more than one occasion, as a Lord Prior of Florence. Of Jacopo, nothing could be found. His brother Giovenco married a woman named Nucciana Ruccelai and gave birth to a son, Giuliano, a name he would share with one of the most famous Medici of all. The same is true for brothers Francesco and Talento, nothing of substance is known about either of them. However, one can only assume, with the amount of prime property owned by these six brothers, that those of little public notoriety were greatly involved in property management. Considering the number of buildings—historic castles and newly built villas—the family would come to own in these areas (more on this in a later post), the family, once again, has much to thank for the less ‘illustrious’ for their quiet support of the family and its growing wealth and acquisitions.

In addition, these six brothers set up a flourishing banking activity, founding the company filii Averardi, (Sons of Averado), though records of this organization continue only until 1330, after which time it appears there were no more financial undertakings by this generation of the Medici as an associated group. There are signs of frequent disputes and disagreements between the brothers, seemingly triggered by details of inheritance and property (brothers fighting over toys). There is distinct evidence that money lending continued as a business practice by more than one brother.

As the other two branches of the family have, for the most part, died out by this point, and this generation is in a state of dysfunction, we must look to the next in line for either its destruction or its reformation.