THE MEDICI SERIES:
A BRANCH DIES OUT
IN A BLAZE OF GLORY 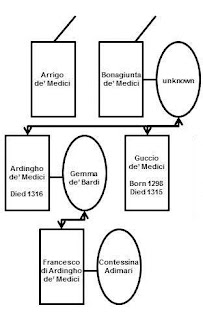 The years of war (see previous post on the Medici, the Guelphs and the Ghibellines) left the people of Florence fearful of both tyranny and despots. For many years, the Florentines shuffled their cards furiously in an effort to retain control of a neighboring city of Lucca whose territory, at this point in history, extended from the Magra to Pistoia to Volterra. On the death of Castruccio, the Duke of Lucca, Louis the Bavarian, conferred Lucca on Francesco, a relative and enemy of Castruccio. The Lucchesi, however, ceded themselves to John of Bohemia who, in 1333, pawned the city to the Rossi of Parma, who gave it to Mastino della Scala (1335), who sold to the Florentines for 100,000 florins (1341). The angered Pisans then occupied the city (1342). Far crueler to Florence was the decision of Milan, Mantua, Parma and, eventually, Padua to side with Pisa to keep Lucca out of Florentine control, an act especially egregious as Milan and Mantua had been decidedly allied to Florence, a city still functioning within a communal hierarchy of authority. Their pleas for help to Robert of Naples and the Avignon Papacy were rebuffed, both urging Florence to make peace, and the years of battle for the locality, and huge unpaid debts by the English to Florentine banking houses had left the great city bankrupt. 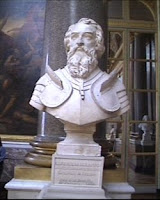 In May of 1342, the civic government of Florence appointed as its new captain and as 'conservator' of the commune, one Walter of Brienne, duke of Athens (whose titles also included Count of Brienne, Conversano, and Lecce), who had, in 1326, acted as vicar of Florence for Charles of Calabria. As the grandson of Huge of Brienne, Walter was heir to property in many parts of the Mediterranean as well as France. He spent the majority of his life traveling between them, involving himself in the politics and wars of each location.

Instead of bringing Lucca under Florentine control, one bought and paid for, Walter of Brienne did nothing as Lucca negotiated its own surrender in 1342. Walter then, knowing Florence's weakened condition, used the military forces entrusted to him and took control not only of Florence, but of Pistoia and Arezzo, declaring himself 'lord for life' over these territories.

Florence put up little fight at first, too disabled economically to do little else. It is theorized that support for the duke's 'tyranny' came from the upper and lower classes, the grandi (the landholding noble families of the country side) and the popolo minuto (the craftsmen and laborers who were forbidden to organize into guilds and consequently to hold any political office). The grandi support came for obvious reasons, while that of the minuto blossomed in hopes that Walter would break the power of the group in the middle, the popolo grasso (the wealthy and influential professionals and guild members who controlled trade and civic administration, the nouveau riche, who created their own aristocracy as the old feudal nobility died out).

But Walter tried to curry favor for too much with the popolo minuto, allowing them to form guilds as well as persecuting and executing those of the grassi, including one Giovanni de' Medici. It was not long before his light began to dim. No fewer than three conspiracies were plotted which merged to form a unified uprising against the despot in July of 1343; Walter of Brienne's 'reign' had not even lasted a year. After an eight-day siege, Walter came to terms with the insurgents and renounced all and any authority on the condition that he and the men he had brought with him to Florence were allowed safe passage out. They showed him the door of the city gate and let it slam shut in his retreating face.

A new government formed out of the patricians who led the revolt, one formed of a council of fourteen, seven from the grandi and seven popoloni. Of the seven drawn from the two lower classes--a mixture of the newly rich merchants and the craftsmen, one name stands out, Francesco di Ardingho de' Medici.

Francesco played a major role in the revitalization of his beloved city, the reinstatement of the Ordinances of Justice and the four quarters of Florence. In addition, the  new government instituted rule by Lord Priors and of a Gonfaloniere of Justice, but this time, all of whom must come from the popoloni. It was a major advancement in the republican rule of the great city.

Francesco prospered personally as well, marrying none other than the Contessina Adimari. The Adimari family finds historical mention as far back as the Middle Ages, mention in works by Dante as of 'small descent' (not noble) but becoming part of the nobility when one of them married a daughter to Bellicione Berti, a noble and wealthy Florentine. Considering Francesco's own social standing, it can be fairly well presumed that their's was a love match.

One that would not last very long. 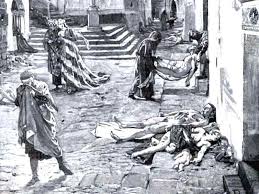 The outbreak of the Black Death in 1348 reduced the population of the city from over 90,000 to less than half that. All indications point to the demise of both Francesco and his contessina in its rampage before they could produce any children to carry on their legacy.