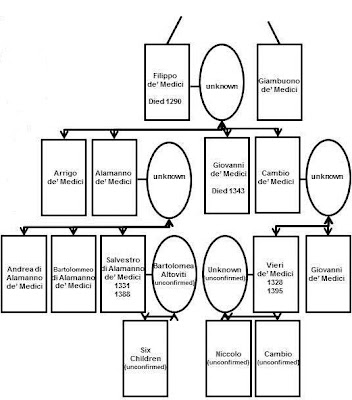 The branch of Medici perpetuated from Charissimo (the second) gave birth to many children. Though he gave birth to two sons, only one of those sons, Filippo, married, giving birth to four sons, two of whom married, producing five sons in total. That generation: Andrea, Bartolommeo, Salvestro, Vieri, and Giovanni were part of the Florentine population during the middle years of the 14th century. The two with confirmable dates, Salvestro (1331-1338) and Vieri (1323-1395) would, given the average life expectancy of men during this era was 50 years, allow for the theory that all the brothers lived and died near to the same years. Could have…were it not for the upheavals Florence—and the Medicis—underwent during those years.

Traveling along the Silk Road, it is believed the Black Death originated in China and Central Asia, carried to other parts of the world by virulent rodents. It reached its peak in the two year period of 1348-1350. Known then as the Great Pestilence, the Great Plague, or the Great Mortality, the Black Death as it now known (a moniker given by Dutch and Swedish chroniclers of history) was 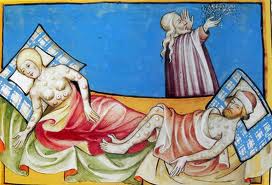 responsible for reducing the European population by thirty to sixty percent, depending upon location. In Florence, the numbers are narrowed to twenty-five to fifty percent. It can easily be theorized, then, that one or more of these Medici sons for which there are no records fell to the horrific disease.


But there were other powerful forces at work in Florence at the time. 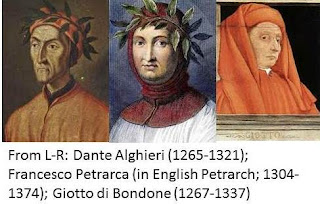 These five men, these sons of Medici, were the first to be born during a recently established Renaissance, though they, like all of their contemporaries, could not know what they were witnessing. They would have been among the first to read the works of Dante and Petrarch as established masters in literature…the first to see the works of Giotto, bringing painting into the new realm of realism.

The Renaissance (thus named in the mid 16th century by Giorgio Vasari in his work The Lives of Artists) was an explosion of discovery and exploration, both in the external world and in self-enlightenment, an explosion including a change in sexual mores. In Daily Life in the Renaissance, author Charles L. Mee, Jr. states, “Sex was not a taboo subject, and sexiness, both female and male was widely admired in their lives and in their art.” And though sodomy was an act punishable with death, it too was explored like never before. Donatello’s feminine David is an example of the gender bending art of the age. It is possible then that the lack of progeny from some of these five brothers could be due to their sexual preferences.

Of the brothers Andreo and Bartolommeo, there is nothing of record in the many book, studies, and programs on the Medici, other than listing them as a brother to Salvestro. And while often confused with a later (and greater) Giovanni de’ Medici, this particular offspring shows no discernible contributions of note either.

Vieri de’ Medici, while not receiving the attention his brother Savlestro does in history, might well have made the most important contribution to the clan to date. Though many of his ancestors and contemporaries became embroiled in conflicts and rebellions, Vieri kept himself to irreproachable conduct, beginning the high esteem Florentines would feel about the Medici, for the most part, for the duration of the family’s existence. Additionally, Vieri was a prodigious businessman, amassing a great fortune. There are morsels of fact left on the trail of history that indicate Vieri established a structured banking system (the original and lasting source of the Medici empire). Some sources, however, site that Vieri’s banking trade eventually failed. It does seem conceivable, however, that he retained a fortune that would allow succeeding generations (though not his own children, of which there is a vague mention) to begin the true dynasty of the Medici.

As for Salvestro there exists a great deal of confusion, perplexity stemming from the repetition of name in generation after generation and among first cousins themselves. Charissimo (the first, one of two brothers to immigrate from Mugello to Florence) would eventually have two, three-times great-grandsons named Salvestro, one Salvestro di Alamanno de’ Medici, and one Salvestro di Averado de’ Medici (the middle names indicating the names of their fathers). While many ‘quick’ histories place Salvestro di Alamanno as the political revolutionary involved in the Ciompi revolt (see next post coming early September), it is the overwhelming consensus that such a life belonged to Salvestro di Averado. Di Alamanno, however, did serve as Gonfalonieri of Florence from 1370 to 1378. And, once again, there is mention of a wife and children, though not confirmable by the rule of three.

It seems unlikely that if Vieri and Salvestro did have children, that there would be no impression of them left on history, especially in light of their cousins’ contributions, not only to Florence but to the world, accomplishments so vast that they will have their own unique posts here…when The Medici Series continues.

What an interesting post. I find the Medici Family fascinating. I recently watched a documentary that stated that the rodents were not the actual culprits but rather fleas or lice they carried. I am sure everything is debatable. I also found the images enjoyable.