Summertime...windows tossed wide open; fresh resplendent air wafting in sweet with blooms bright and fecund; wind sluicing through lush trees as birds chirp their happiness at the warmth of the sun upon their backs; AND the freshest of food brought to the table in celebration. Welcome to the Summer Banquet Hop and join along as over thirty authors add their voice to the celebration... honoring summer, food, and the history of food related topics, each offering their own particular subject and theme, and their own giveaway offerings.

Italians have made extraordinary contributions to the culinary world, but none

may be as important as the fork. While ancient history shows that large, two tinned forks were used as a cooking utensil as far back as Ancient Egypt (~3000 BC), they can be found in the same capacity, some made of bronze and some of silver, through the Bronze Age of Qinghai, China to the Roman Empire. But it was in Italy that the fork made its way onto the table as an eating utensil. 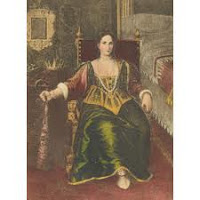 Theodora Anna Doukaina (1058-1083), the daughter of Byzantine Emperor Constantine X, became the wife of Domenic Selvo in 1075, a man serving as Doge (ruler) of Venice from 1071 until 1084. While war raged in all corners of Europe, Domenic was a man of peace and civility, forging alliances which contributed to Venice's Golden Age, enhancing their stature as the center of European trade. Theodora's contribution to the evolution of civilization was the fork. She brought hers with her, to the table of Doge, and while many chided and denounced her for its use...for her haughty manners...the use of the fork slowly gained more and more popularity, especially on the tables of the noble and wealthy merchant classes. It was not long (historically speaking a few centuries) until everyone in Italy was...forking!

Through visiting dignitaries and diplomats, through marriages which brought such notables as Catherine de' Medici to the tables of other European countries, the fork made its way through the continent and into the hands of the people.

Thomas Coryat, an English traveler and writer of the late Elizabethan and early Jacobean age, gives a marvelous insight into the attitude of the fork as it made its journey. In his memoir of a European tour, one titled Coryat's Crudities: Hastily gobled up in Five Moneth's Travels, he wrote: 'because the Italian cannot by any means endure to have his dish touched with fingers, seeing all men's fingers are not alike clean. These 'little forks' were usually made of iron or steel, but occasionally also of silver.' Coryate says he 'thought good to imitate the Italian fashion by this forked cutting of meat, and hence a humorous English friend, in his merry humour, doubted not to call me furcifer, only for using a fork at feeding.' (The word fork comes from the Latin furca, meaning "pitchfork.")

But of course, Italians are not only famous for bringing the fork to Europeans tables, but they are as well, or more famously known for the delicious meals these forks were used to eat. It would be remiss to not include a recipe...one that can be found throughout Italian history dating back to the end of the Middle Ages all through to today's tables. It is a an Italian favorite: Vitello con Piselli (Veal and Peas)! 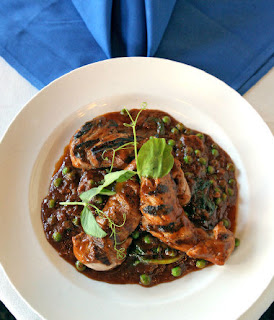 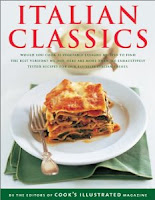 In honor of Summer, food, and the Summer Banquet Hop, I will be giving away a copy of my latest book, The King's Agent, set in Renaissance Italy (a recipient of a starred review in Publishers Weekly) as well as a copy of Italian Classics Cook Book. To enter, you must sign up as a follower to this blog. For additional chances to win, leave a comment on this post, Friend me on Facebook and follow me on Twitter (@DonnaRussoMorin). Buona fortuna e buona tavola (good luck and good eating)! This giveaway is limited to the US residents only.

Be sure to visit the other Summer Banquet Hop participating bloggers for more intriguing historical food posts and more giveaways!

First, thank you for the chance to enter the giveaway. I wanted to get that out there before I start rambling on so I don't forget!

I had no idea about the Italian connection to the fork! I loved reading that and I am storing the information for the next big family dinner so I can use that as the tidbit of information that no one else will know!

The cookbook sounds scrumptious. I think I might literally have dropped just a bit of drool (I know, sorry not the most pleasant of thoughts or images)on the desk here. I'm thinking that every recipe in there should be cooked and eaten immediately (though perhaps eaten well on the treadmill, just to be healthy and stuff). Italian food is amazing.

The cover of "The King's Agent" is stunning! All the book covers are. I was checking them out on Amazon. I was looking at the excerpt (the sneak peek) from the book and the writing style is just beautiful. I will need to check them all out.

Thank you again for the chance to enter. I followed using GFC (Shelly Hammond), Twitter (@ShellyHammond14), and Email (booski24@hotmail.com I don't want to miss any book releases and I love the blog).

Have a wonderful day everyone!

Great post, Donna. Thanks for the chance to win your book.

Great post, Donna. Thank you for the chance to win your book.

I signed up to follow your blog and friended you on Facebook. I look forward to checking out your books.

Loved this article - thank you for sharing!

Fascinating post, Donna. I'm more than happy to follow this blog, and I'd certainly love to win a copy of our book.

Thanks to all for your kind words on the post; so glad you're enjoying the foray into the world of Italian cuisine. And thank you, Shelley, for the compliments on my books; much appreciated.

I love the history of the fork post. I didn't realize how the fork came about. Thanks for sharing the recipe for veal and for the giveaway opportunity.

Wonderful recipe - makes my mouth water! And as to the fork - it's interesting to note just how differently it is used in various parts of the world even today.

<3 my fork--thank you Italy! Great post, Donna. I've never had veal, but that recipe looks great!

thanx for sharing the yummy recipe!!!

i love the covers of your books!!

Thanks for the great comments. You have to try the dish...it's delish!

I never realized that the Italians brought the fork to the dinner table. Thanks for the great information!
Susan Heim
smhparent [at] hotmail [dot] com

I am a new follower and so interested in the Medici family as I am not as familiar as I would like to be on this part of true history. Both books sound great and I will be delighted if I should win either of them. Thank you for this giveaway.
Gratefully,

Having married into two separate Italian families, I was privy many of these details, but it was great to revisit them.

Interesting about the fork! And Italian food is beyond wonderful. No wonder so many kitchens have the Tuscan look.

Congratulations to Sophia Rose! The winner of the The King's Agent and Italian Classics Cook Book! But I feel like the real winner, having all you wonderful people visiting my blog and interested in my work...thank you all so very much!

I am so excited to be the winner. Thank you to Donna!