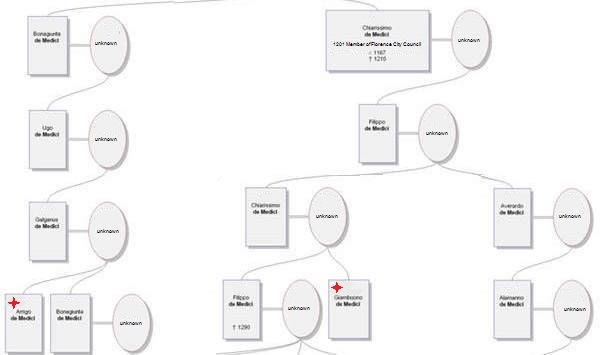 The brothers Charissio and Bonagiunta had settled well into their lives in Florence when last we visited with them. While both served their city and their government, subsequent generations lived modestly and unambitiously. As can be seen from the pictured portion of the family tree, not even their birth and death dates were noted.

Though no monumental contributions were made by these branches of the family tree, they were diligent, hard working, and ambitious. Through their work, partnerships formed and marriages made, these generations inculcated the family Medici more and more with life of Florence itself, gaining prestige and power bit by bit. But it would not always be an easy climb up the ladder. 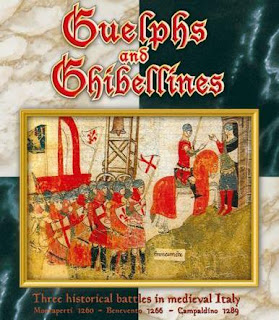 Coinciding with the estimated years of life of the last generation on this particular portion of the Medici family tree, it can be deduced that one or two were involved with the great conflict between the factions of the Guelphs and Ghibellines (quick background...the struggle between the Pope and the Holy Roman Emperor began in the 12th century; their two factions--those who fought for one side or the other--were called the Guelphs--for the Pope--while the Ghibellines were the Imperial party). It is an interesting point of trivia to note that the Montecchis were Ghibellines; the Capuletis were Guelphs--names more than reminiscent of Montague and Capulet. As a result of the Battle of Campaldino, the Guelphs would reign supreme in Florence, but they would not reign united.

There are theories that the Florentine Guelphs broke apart due to the level of Papal support each member supported. But there is another postulation, one far more entertaining and interesting, offered by none other the famous and infamous Nicolo Machiavelli himself. In his History of Florence he lays claim that the division between the Nera (the Blacks) and the Bianca (the Whites, the faction more opposed to Papal power) all began...because of children's spat. While both children were of the Cancellieri family, but of two different branches, cousins in fact. As the divisivness escalated, those who descended from Bianca came to be known as the Bianci; it was only logical for the others to adopt the moniker of the Neri.


"These two parts, Blacks and Whites, members of a family whose name Cancellieri, which is divided: for some relatives were called Whites, Blacks others, and so the whole city was divided."
( Dino Fellow, Chronicler of the things necessary in 'his time , Book I, 25) 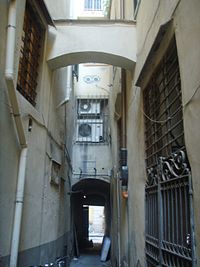 From the childhood spat arose to one of deadly animosity.  At the head of the Bianchi stood Vieri de Neri faction. The so-called dead Scandal, vicolo dello Scandolo, a winding alley snaking between the Corso and Via degli Alighieri, was created in the fourteenth century to divide the properties of the two factions, to prevent them from destroying the interior walls connecting the two family homes and assaulting their enemy--their family--in the dead of the night.
'Cerchi, while Corso Donati led the

Donati and the Neri could name such high citizenry as the whole of the Pazzi, the Bisdomini, Manieri, Bagnesi, Tornaquinci, Spini, Buondelmonti, Gianfigliazzi, and the Brunelleschi. But other names, other influential families, lined up behind the Bianchi: the Adimari, the Abati, a part of the Tosinghi, of the Bardi, of the Rossi, of the Frescobaldi, of the Nerli, and of the Manelli; all the Mozzi, the Scali, Gherardini, Cavalcanti, Malespini, Bostichi, Giandonati, Vecchietti, and Arrigucci. There were two other names associated with the Whites, one being that of Dante and the other...Medici.

Violent ambushes, poisonings, accusations of witchcraft...the rift escalated. The Council of One Hundred, which included Dino Fellow and Dante Alighieri as a priori, decided to intervene, to confine the heads of the two factions in an attempt to cool tempers. The arrangement had no result, and Dante himself traced his intervention in the government to his downfall.

More violence, and the involvement of the Pope and Charles de Valois of France found the Whites--Dante and the Medici among them--exiled from Florence. But for some, for those for whom evil is a in their core, good is never good enough. With the expulsion of the Whites, the Blacks began to turn in upon themselves and more violence erupted between Corso Donati and Rosso della Tosa. The city could take no more...Corso Donati was assassinated, the remainder of the Donateschi were expulged, and the political and social life of Florence began to return to normal once more. And new families began their rise.

While there is no confirmable history to say which of the Medici were involved and exiled, it is assumed from their marriageless and childless lives, and the most logical in terms of where they fall in the chronology of the family, the two most probable members were Amigo and Giambuono (marked with a red star on the family tree). And those these men fathered no children, their nephews were quick to take up the reigns of political involvement and ambition their uncles began.

Posted by Donna Russo Morin at 8:30 AM

Fascinating, have you asked anyone at Novelspot.net to review your books? I am a reviewer there and you can ask for me. I can review your books if you need someone to help you promote your books just a little bit more. I love the quote at the top too, it up to us to show how it felt. Well said!

Thanks so much, Nancy. Ironically, I used to be a reviewer and an editor at Novelspot. I put my first book on the list, I believe, but no one chose it. I would be so grateful if you'd like to review them. I'll contact Ali. Again, my thanks.