WATERLOO; OUR WATERLOO
THE HEAVEN AND HELL TOUR VOL. IX

It was a reasonable ride from Bruges to Waterloo, about 80 miles or an hour and a half. It was the only thing reasonable about that day. 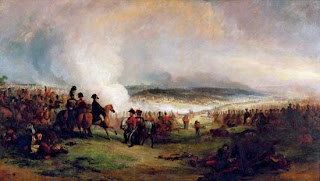 On June 18, 1815 the members of the Seventh Coalition, those formed by an Anglo-Allied army, a combination of the English under the command of the Duke of Wellington, and the Prussian's led by Gebhard von Blucher, defeated Napoleon at the end of a three-day battle, ending as well Napoleon's return to power post-exile, a respite which lasted a hundred days. Napoleon's forces of 72,000 had little chance against the combined troops of nearly 115,000 (depicted in this famous painting, The Battle of Waterloo by George Jones, The Bridgeman Art Library/Getty Images).

The Butte du Lion (Lion’s Mound) juts out of the ground, a grass covered mound reaching into the blue sky from out of a serene and flat plain, commemorates the spot where, it is believed, William II of the Netherlands (then Prince Frederick d'Orange-Nassau) was wounded during the battle. His father commissioned the monument topped with a lion from the Netherlands' coat of arms. 226 steps lead to the top of the 141 foot high memorial. The lion at the top weighs in at 28 tons (yep, tons) and measures 4.5 meters in length and 4.45 in height. The lion symbolizes not only victory but the new United Kingdom of the Netherlands. It's open mouth faces the defeated France and its front paw rests upon a cannonball in symbolism of peace. The monument was inaugurated on November 4, 1826. 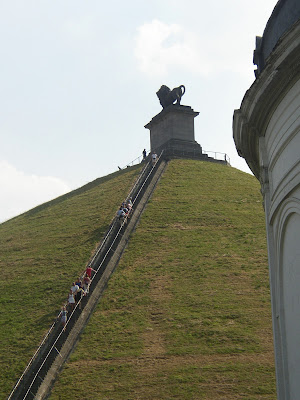 Many of the kids spent the €2.50 it cost to climb the stairs to the top. Otherwise there’s not a whole lot to occupy a tourist at this location; there is a visitor’s center which provides a short slide show and a twenty-minute video for approximately five euros. Still, there was time to kill until we could go on to our next destination.

If only we had gone earlier, instead of lounging at another outdoor café, the next few hours might not have been so stressful.

Approaching the bus we spied our group leader, our incompetent guide and our militant bus driver in a close conversation. They did not look happy.

If our trip had not already been riddled with National Lampoonesque blunders and bungles, rough conditions and down right bad luck, this topped it off.

The bus was broken down.

The shock was palpable. The anger no longer simmered below the surface, it was in full, open boil. For a few minutes I felt personally responsible…that what I believed was my bad luck, my curse, had followed me across the ocean (this was before I believed that we create the luck we desire and the luck we believe we deserve). When the truth came out, I was certain it was simple human ineptitude.

The disabled bus situation would not have been such a crisis if the kids weren’t due to perform in less than an hour and a half. It was a small consolation that Reverend B, our host at the All Saints Church in Waterloo, was in his car in the parking lot, waiting to lead the way to his church.

We packed his car with five of the kids and Ms. Y, even illegally using the far back of his station wagon, and sent them off. Calculating the time the round trip would take and the number of kids remaining, it was clear not all of them would get there on time. Certainly we parents, who came to see our offspring perform in the foreign surroundings, unarguably the least important to transport, would never make it in time.

Some of us tried to get the small cart-like tram that circled the memorial site to take us all to the destination, but they only had a license for the museum grounds. We sat on the boulders in the parking lot, the ants crawling on our packages and our butts, counting the minutes as the good Reverend came and went, came and went. A glimpse of hope came in the form of a bus repair truck pulled into the parking lot. It only took a few minutes for the problem to reveal itself, to fix it, but the anger lingered for a long time.

The bus had run out of gas.

Yes, I said the bus was out of gas.

There was no time for further explanations at this point. We jumped on the bus, followed Reverend, and made it to the church on time.

The chorus and strings performed brilliantly for the grateful and enthusiastic audience members, regardless of the record high temperatures, rising far above the conditions they suffered. After the performance, after wonderful words of appreciation and praise from the Reverend, the church ladies offered the entertainers just what a group of teenagers would want…snacks, chips and sweets. With mouths overflowing with delights, it was quite satisfying to see the young people mingling with those from the church and making new friends.

The next morning we bid goodbye to our wonderful hotel and set off for Amsterdam. As we embarked on the drive that would last approximately 140 miles and a little over two hours, our bus driver picked up the microphone. In his sputtering delivery he confessed that the previous day’s debacle with the bus was his fault. My first thought was that it takes a big person to admit to such a large mistake. And then he went on to claim that the gauge was broken. Oh, so it wasn’t his fault after all; he wasn’t admitting to it anyway. Like so many people today, he claimed it was someone else’s, or something else’s fault.

The man is a professional bus driver. We had driven from Paris to Normandy to Rouen to Bruges then to Waterloo. He didn’t realize that somewhere along that long line, regardless of what the gauge might say, that he would need to refuel the bus? Unless this was the same bus the Beatles used on their Magical Mystery Tour, how could it not need fuel? To admit fault deserves respect for courage; to make excuses does not.