BRUSSELS, THE PISSING BOY, AND MORE:
THE HEAVEN AND HELL TOUR PART VII

The four-hour ride crossing 155 miles (250 kilometers) took us out of and into the , most precisely into . We were surprised there was no tangible borderline and no passport checks as we crossed. Broekzele, a village of the marsh, was the settlement that became in the sixth century, a stop on the trade route between and the towns of and . The town grew and prospered under the leadership of the Hapsburgs, and became the capital of the Spanish Netherlands. 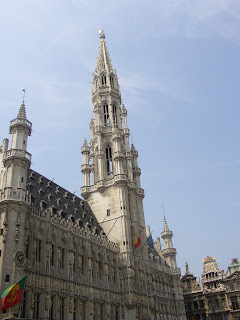 There were obviously no structured plans for the group this afternoon, for we were brought to another square, a most sizable and impressive one called, in English, The Grand Place and set free for four hours. The Grand'Place or de grote Markt is considered one of the most beautiful squares in Europe. Dominated by the Town Hall (pictured), the Guild Houses, and the King's house. The square dates back to the 12th century with the grand stone buildings coming in the 14th.
As a mom, one with a slight tendency to be protective, I was a little concerned with the teenagers sent off in a completely unknown place--a foreign country--for four hours, especially one with such a potential for getting lost. From the main, large square, the roads branch out like the spokes on a wagon wheel with multiple short, cross streets, streets that just keep going and going. Once venturing down them, it was very difficult to look back and distinguish which way to return. If one could find the high rising spire of the Town Hall that dominated the square between the gaps of the other tall buildings, it was possible to get back to the square. This is exactly what my son and his group did when they became lost. 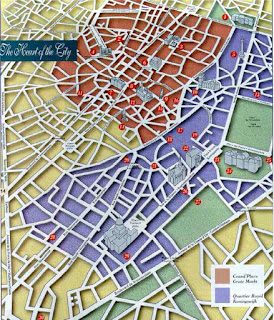 Mom and I didn't wander too far. The spider web of streets was daunting in its confusion to say the least. We were looking for a newspaper; it had been quite some time since we had seen one or even watched some news since, so far, we hadn’t really found English speaking television. The Hezbolah problems in had just begun when we left home and I felt a niggling of fear at what may be happening, at not knowing. Since 9/11, fear had become an inherent part of life, thoughts of it were an infection of every mind.
We were also looking for a bookstore, one that sold English language books; without television to fall asleep to and with all the long bus rides, my mother had quickly burned her way through the two paperbacks she had brought with her. Ironically we soon found just what we were looking for at a BBC store. BBC Audiobooks of was the largest financial sponsors I was able to secure for the trip; the irony of the find was lovely.
There were plenty of clothing stores in a small mall-like area and, of course, an abundance of lace and chocolate shops. We returned to the square and found a lovely café to eat our lunch. Our charming waiter spoke English and Spanish and something that sounded like Russian or German. His linguistic abilities, and that of so many others in the service industry, impressed me.
The food was excellent; a wonderful Waldorf salad with everything in it, but my attention and worry were on the whereabouts of my son. I mentioned my concern to my mom who advised me to say a prayer. I offered up a quick one then craned my neck to search the square for the face so dear to me. And there he was. It was quite startling in its obvious, immediate response. I have often felt God’s presence in my life, the power of Source, and been grateful for it, but I have equally as often wondered at her ways, confused by the directions it’s taken me in. 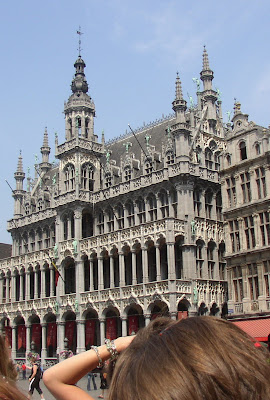 Feeling better for having seen my son, we did our shopping but it was just too hot and we were too tired to keep it up for the whole four hours we had available to us. We took a couple of seats at another outdoor café where we had a fantastic view of the King’s House and slowly sipped soft drinks just to retain the chairs. The King's House (pictured) called Broodhuis (bread house) derives its name from its origins. In the beginning of the 13th century, a wooden structure stood in its place, from which bakers would sell their wares.
We read the paper, I kept my eye out for , and we talked. The close chair-up-against-chair configuration made it hard not to become acquainted with your neighbor and we soon began talking to ours. He entered the dialogue as we spoke about, what else, my sons. A charming Italian man, perhaps a little older than myself, children were obviously a dear topic to him as he shared his angst over his own eighteen-year-old who longed to spread his wings and fly on his own. He and my mother really hit it off and continued the conversation as I continued to search for . There might have even been some flirting going on, which my mother completely denies, though she does refer to our nameless acquaintance as ‘my Italian friend’.

Once we were all back together, we moved en masse a few blocks to the area’s most popular and intriguing tourist attraction, what I call the pissing boy. The official name is the Manneken Pis, which translates to ‘little man piss.’ A most bizarre object of abject adoration, it is a sculpture of a cherubic, curly haired, muscular boy peeing. Many of us were confused by the intense attention given to this, plainly speaking, obnoxious artwork. The crowds around him were, at most times, ten or more rows of people deep. They pushed and jockeyed for a good position to have their picture taken in front of him. He was everywhere, in every shop and souvenir store, in every possible form; the corkscrew with the well-placed spiral was a particular favorite. 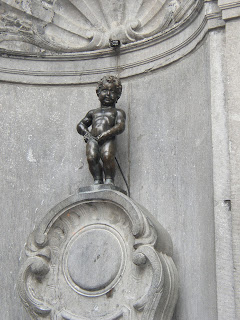 Two legends attempt to explain the Manneken Pis. The first and most famous is that of two-year-old Duke Godfried II of Brabant. His troops, while battling the Berthouts, put their lord in a basket and hung him in a tree, where the child urinated on their enemies, who eventually lost. The other popular postulation contends that as attackers were laying explosives at the base of the city walls, a small boy named Juliaanske, spying the attempts, urinated on the burning fuse, dousing the sparks, and saved the city.
Even now that I know the history and meaning, I can’t help but tilt my head at such an unlikely city patron, scrunch my face in confusion and ask: “What the hell?”
Back on the bus there was a distinct anxious tension as we headed for our hotel, an ominous silence prevailed over us all as we scanned the streets and buildings along our route. We passed a surplus of American hotels, sighing as the inviting and familiar facades faded behind us, Hiltons, Sheratons and even a Holiday Inn (you ain’t seen nothin’, til you been, in a motel, baby, like a Holiday Inn).
We turned the corner and there we stopped, in front of the (Avenue du Haut-Pont 2, ). It is a modern looking building which was promising in itself, but what really got us all buzzing like bees come upon a meadow of wildflowers, was the windows. They were all closed. Why would they have all the windows closed on a sweltering day unless…AIR CONDITIONING!!!
Everyone started talking faster and louder. We yanked our bags off the bus and rushed to open the doors. The blast of artificially cooled air hit our faces, caressing our skin. It felt like the touch of salvation. The rowdy cheers bounced off the surrounding stone building of the small, alley-like street.
We all rushed into the lobby as they passed out our room keys. Again, there were only two elevators that could only fit two people and their suitcases. But who cared? We were happy just to be in the comfortably appointed, cool public room. Many of the kids were on the first floor so they skipped the elevators all together.
After making my way to our room and marveling with my mom over the amenities, I set off to alert the kids that the stuff in the mini-bar was not free, but rather very expensive. When I got to their floor, there was an undeniable party-like atmosphere. They rushed from room to room, calling out to each other and laughing.
“Did you see the great beds?”
“Did you see the bathroom?”
“Did you see the two toilets?”
It wasn’t a second toilet but a bidet, which, once I explained what it was, brought on a whole bunch of other interesting questions. I laughed and joked right along with them.
The high spirits carried into dinner served on the premises. While once more of a somewhat bland offering (pork ribs with no sauce, French fries, vegetable soup, pasta salad, green salad and fruit) it was an all you can eat buffet, another reason the teenagers felt like rejoicing. There was something relieving and soothingly joyful to be enfolded in the comfort offered to us for the first time. Perhaps we are, as middle class Americans, spoiled. But, if we work for those comforts, earn them, why do we not deserve them?