There are a few places, among the multitude of sights visited on this trip, which I will always treasure; is on the pinnacle of the list. A place less well known than many others in this journey, but one highly recommended for any European traveler.
The small town located about sixty miles north east of is a charming and inviting city called the of the North. Canals web through the town for miles, crossing and running parallel with narrow streets. Both passageways are lined with small, quaint buildings, holding true to the long ago centuries in which they were built. Among them are some of the oldest churches we had encountered.
From the moment we stepped into , it felt like we were in a magical place, not only beautiful but welcoming. Prevalent theory dates the founding of Bruges by Vikings sometime in the 9th century. The very root of its name is derive from the Scandinavian 'Brygga,' meaning harbor. The settlement was linked directly to the North Sea by the river Zwin, which quickly made it an important stop on the international trade route.
But as the world expanded and trade routes changed and new ones were discovered, Bruges' history became a familiar one of highs and lows. And though it lost its 'power' by the 20th century, it soon became an international tourist destination, one greatly deserved by its breathtaking beauty. 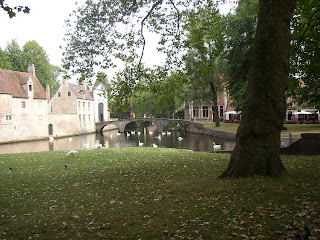 The first site to greet a visitor to the city is the gracefully arched walking bridge. This bridge (pictured) is considered a lover’s bridge; newly married couples cross it to bring their union good luck. The streets, though filled with with chocolate shops, waffle vendors, and souvenir shops, they are constructed with such quaint architecture, one fills transported to another time as well as a foreign place. 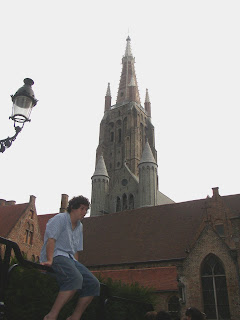 Churches are a specialty of the small city, boasted not one, but two of the oldest still standing, both from the ninth century. This picture is my son's favorite of all those I took of him on this trip; in the background is the spire--one over four hundred feet in the air--of The Church of Our Lady. It is, in fact, the tallest structure of the city and contains the tombs of Charles the Bold, the last Valois Duke of Burgundy and his daughter, the duchess Mary.


No time spent in Bruges would be complete without spending time upon the water, the winding canals that have earned the city the moniker of the Venice of the North. Boat tours of Bruges last approximately about half an hour and are captained and narrated by charming natives. From the motorboats that cruise along the thin strands of water, we could see how the people lived, a private peek into their backyards, the secret gardens, and secret places created by plants and stone that looked separated in time as well as space. I could have sworn I saw muse faeries peeking out among the dazzling petals festooning the balconies and patios (oh, what could be written amidst the sheltering, encouraging arms of this place?). A long-time resident of the city, this lazy canine has watch tourist pass his window for years, and is considered a 'celebrity' of this magical place he calls home. 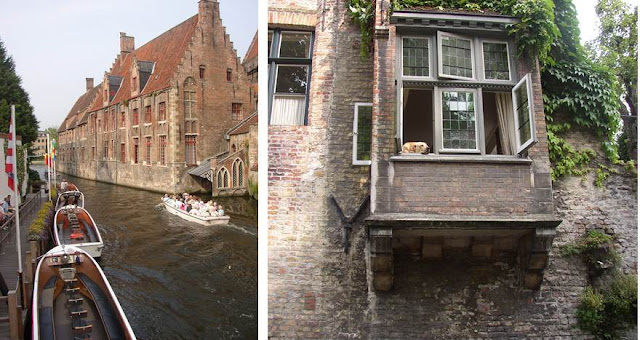 After a lunch of individually, freshly made crepes stuffed with cheese, ham and tomatoes in preferred combinations, my mother and I set off on a free-time excursion. We returned to The  Enshrined within the altarpiece of the southern side is one of the most magnificent of Michelangelo statues, one of the few pieces of his artwork on display outside of . This Madonna and Child was created in 1504, long before Michelangelo had begun his work upon the Sistine Chapel, and is now, rightfully known as the Madonna of Bruges. 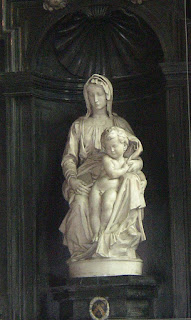 I was captured by the work, soothed by the smooth lines and curves of stone. I was enthralled by the Virgin’s face, her expression; she appears mournful but accepting, as if she could see the anguish of her future, the turbulent fate of her son, but its inevitability as well. During my research, I was shocked to find how many others saw the same thing as I had in her pensive face. This creation of Michelangelo's is, in fact, famous for this alternative treatment of this very common subject matter. It relates, no doubt, to his own grief at the lost of his own mother while a child, a loss that was to appear throughout the artist's complete scope of work.
Making our way to the bus, we stopped and bought souvenirs including some of the famous, deservedly so, Belgian chocolate. Our meanderings brought us passed waffle shops; they are as prevalent as the gift shops and the enticing sweet, vanilla odors reached out to the street like powerful arms…and grabbed us. We bought one piece each and walked a block further to sit on a stone bridge. Across the water resplendent with graceful swans a bride and groom posed for pictures on the Lovers’ Bridge.
Settled happily among a few other tourists, we took our first bites. The fluffy yet thick consistency melted on my tongue. The abundant sweetness burst in my mouth. With just a light coating of sugar (surely to put syrup on these waffles would be a sin against nature) it was a delicate sweetness, not an overdone cloying one. Pure heaven.