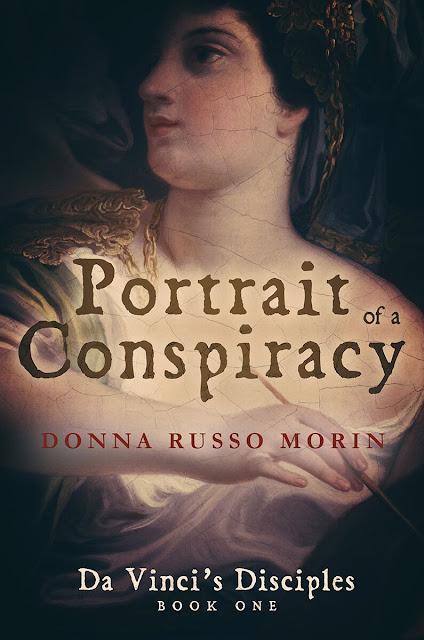 
It is with great pride and excitement that I reveal the cover of the first book in my upcoming series, Da Vinci's Disciples: PORTRAIT OF A CONSPIRACY.


One murder ignites the powder-keg that threatens to consume a city. Amidst the chaos, five women and one legendary artist weave together a plot that could bring peace, or get them all killed.

Seeking to wrest power from the Medici family in 15th Century Florence, members of the Pazzi family draw their blades in a church and slay Giuliano de' Medici. But his brother Lorenzo de’ Medici survives, and seeks revenge on everyone involved, plunging the city into a murderous chaos that takes dozens of lives. Bodies are dragged through the streets, no one is safe.

Five women steal away to a church to ply their craft in secret. Viviana, Fiammetta, Isabetta, Natasia, and Mattea are painters, forced to hide their talent from the world, but freed from the restrictions in their lives by their art. When a sixth member of their group, Lapaccia, goes missing, and is rumored to have stolen a much sought after painting as she vanished, the women must venture out into the dangerous streets to find their friend and see her safe. They will have help from one of the most renowned painters of their era—the peaceful and kind Leonardo Da Vinci. It is under his tutelage that they will flourish as artists, and with his access that they will infiltrate some of the highest, most secretive places in Florence, unraveling one conspiracy as they build another in its place.

Historical fiction at its finest, Donna Russo Morin begins the series, Da Vinci’s Disciples with a novel both vibrant and absorbing, perfect for the readers of Sarah Dunant.

Da Vinci’s Disciples, the trilogy, is the story of a secret society of women artists, under the tutelage of the great Leonardo da Vinci, who must navigate the treacherous life of 15th century Florence while trying to bring their artistry to the world. PORTRAIT OF A CONSPIRACY will be followed by THE COMPETITION and THE FIRE (tentative titles).

‘A riveting page-turner unlike any historical novel you’ve read, weaving passion, adventure, artistic rebirth, and consequences of ambition into the first of a trilogy by a masterful writer at the peak of her craft.’
-C. W. Gortner, author of
The Confessions of Catherine de’ Medici and The Vatican Princess

READ AN EXCERPT: PORTRAIT OF A CONSPIRACY EXCERPT