THE MEDICI RETURN TO FLORENCE

The years between 1494 and 1512, found the Medicis without a homeland, nomads on the search for a place on the peninsula of Italy and for powerful support. That support came from the Vatican itself. 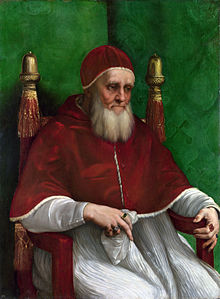 Pope Julius II, born Giovanni della Rovere, known as ‘The Fearsome Pope,’ ‘The Warrior Pope,’ set to ‘clean house’ from the moment of his election. He rid the Vatican of any trace of his predecessor, The Borgia Pope. Julius’ maneuverings rendered it impossible for any Borgia to regain a smidgen of control. He denounced and defiled them with a righteous whip, “I will not live in the same rooms as the Borgias lived. He [Alexander VI] desecrated the Holy Church as none before. He usurped the papal power by the devil's aid, and I forbid under the pain of excommunication anyone to speak or think of Borgia again. His name and memory must be forgotten. It must be crossed out of every document and memorial. His reign must be obliterated. All paintings made of the Borgias or for them must be covered over with black crepe. All the tombs of the Borgias must be opened and their bodies sent back to where they belong - to Spain.” The apartments of the Borgias remained closed, sealed away from any eyes, until the 19th century.

But they were not Julius’ only targets.

By reconciling two powerful families, the Colona and the Orsini, his power in Rome was solidified. He freed Venice, Bologna, and Perugia from the despotic rulers and issued a dispensation allowing Henry VIII to marry Catherine of Aragon, his brother’s widow.

It was this pope, one who never shied away from conflict or war, who created the conditions for the

enemies of Piero Soderini—Soderini having controlled Florence since the Medici exile—to rise up and take action. As the Holy League battled the French on many fronts, the Soderini and their ilk remained allies, underestimating the power of the League and their friends in Florence. Many of these papal friends desired reconciliation with the Pope and demanded Soderini’s removal. Though the Great Council of Florence continued to lay their support on Soderini, collusions erupted all around him. As the Florentines gathered 350 armed knights, 500 light cavalry, and 14,000 infantry, their lack of cohesive ruling could not agree on where to place them. On Sunday, August 29, 1512, Spaniard Ramon Folc de Cardona, Viceroy of Naples, and his troops were placed by the Pope and by Cardinal Giovanni de’ Medici in Prato. The attack was a quick, murderous sack, leaving hundreds dead in the wake, leaving all Florentines to question their leader.

Only four days later, four young nobleman stormed the Palazzo della Signoria, demanding release of the thirty Medici friends who had been imprisoned as a precaution. Soderini, when notified of the actions in the government palace, sent Niccolo Machiavelli to bring Franceso Vettori, a commissioner of the city’s internal defense force, to rush to the palace to mediate the dangerous standoff. Vettori found Soderini isolated and helpless, hurried him away, from the palace, from Florence, and into exile, where he would remain.

For weeks Florence floundered, many of the nobility cried out not only for the Medici return but for their rule. Cardinal Giovanni de’ Medici, having returned to the city barely noticed, dressed in civilian clothes and shaved faced, walked in as a private citizen, walking through the city with friends. Yet the divisiveness was still rampant. Action had to be taken. Under Giovanni’s orders, Cardona carried out a coup on September 16, seizing the piazza and the palazzo. Any resistance by the popolo—the citizens—was dampened by the distribution of bread and the rumor that 6,000 Spanish infantry were on their way to the city. Florence was once more in the hands of the Medici.

Though the most logical and popular leader would have been Giovanni himself, his duties as Cardinal and Papal legate kept him far too often in Rome and Bologna. Thus enters Giuliano II de Lorenzo de’ Medici.

Born in 1479 to Lorenzo de’ Medici and Clarice Orsini, Giuliano—named for Lorenzo’s assassinated brother—was only sixteen when the family was exiled. His young adulthood was not spent in council chambers or ruling palaces, his education was not one of a destined leader. And yet that is what he became in 1512. Most call his leadership simply moderate. As was said of him, ‘he does not understand the affairs of the city’ and was unable to contemplate the views of the citizens which had become more self-interest motivated rather than simply Medici followers. Giuliano did little to dispel the notion, did, in fact, add to it with his frequent absences from the city. He relied on a strong inner cabinet led by one or two powerful men to resolve disagreement and make decisions.

Such apathy was as despised as despotism. In February of 1513, a conspiracy to assassinate Giuliano was discovered. Within days it leaders and conspirators were rounded up and executed. And though he took no part in it, Niccolo Machiavelli’s outspoken skepticism concerning the new Medici leadership found him ,arrested, tortured and jailed for a month. This conspiracy, concurrent with the criticisms from the growing Savonarolan circles, ended the moderate ruling stance of the Medici.

On March 11, 1513, when Giuliano’s cousin, Giovanni, became Pope Leo X, the Medici fortunes, and their power, rose to new heights. 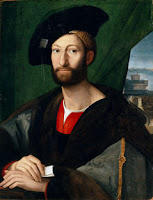 On February 22, 1515, Giuliano married Filiberta of Savoy, daughter of Philip II, Duke of Savoy, adding tighter knots to the ties to France. That same year, Francois I, Fliiberta’s nephew, conferred upon Giuliano the title of the Duke de Nemours. It was a short, barren marriage, though Giuliano did sire a son, Ippolito, born four years prior to the marriage. Giuliano’s rule was short and inconsequential, ending with his young death in 1516 at the age of 37.

Giuliano was succeeded by his nephew, Lorenzo II, and his tomb resides in the Basilica of San Lorenzo, as do many of the Medici. Because of his name, his tomb is often mistaken for that of his namesake.