It is an indisputable fact, pronounced by many and for many, many years, that Florence was the cradle of the Renaissance. For the Medicis, coming to power at the same time as this artistic revolution begins, they were of an open, intellectual and cultured sensibility, able to not only ‘see’ what was taking place, but to relish it, to nurture it. As a companion to the ongoing Medici series, there then must be posts to celebrate the preeminent artwork of each generation.

When last visiting with the Medicis, Giovanni di Bicci de Medici (1340-1429) had brought the family to the true beginning of their power, doing so through the expansion of the banking enterprises. But he used the family’s growing wealth not only to serve the Medici, but to foster the spectacular art being created in his beloved city. Here are but a handful of those works.

Born Lorenzo di Bartolo (1378-1455), Ghiberti was a sculptor is best known for the creation of the bronze doors of the Baptistery of the Florence Cathedral. But perhaps a more startling example of his work—startling in the exquisite example of the Renaissance movement, are the second set of doors he created. In his own words, “In this work I sought to imitate nature as closely as possible, both in proportions and in perspective... the buildings appear as seen by the eye of one who gazes on them from a distance.” 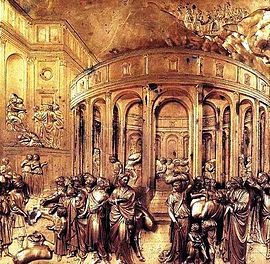 In the work of Taddeo Gaddi (1290-1366) are glimpses of the changes to painting that are about to occur. Born in The Angelic Announcement to the Shepherds is part of a cycle of work entitled Stories of the Virgin. The first glimpses of ‘perspective’ of clear in the placement and sizing of the shepherd and the angel. 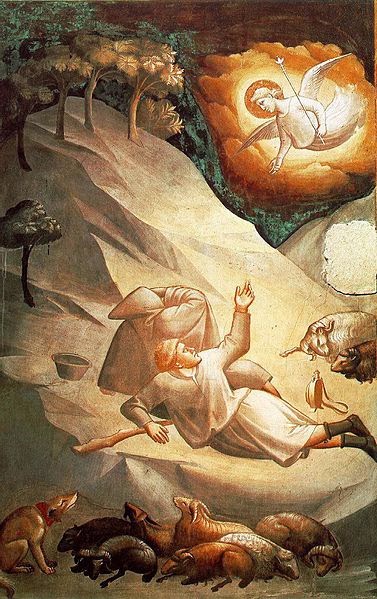 Born Piero di Giovanni (1370-1425) the artist who would be known as Lorenzo Monaco was a true contemporary of Giovanni di Bicci de Medici. Although his work does not embrace the new techniques to come, its inclusion of multiple characters lays a path that would be followed. In his Adoration of the Magi his use of brilliant colors and multiple saints is clearly in evidence as is the total absence of geometric perspective that would soon come to not only define the brilliance of the artistic Renaissance, but which would change the very path of artists to come. 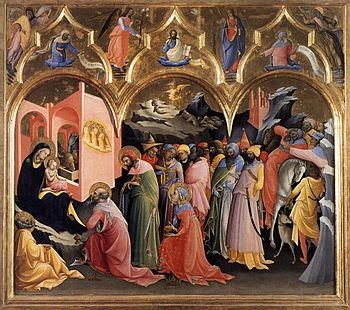 Thank you, this was very helpful and it made a lot of sense.
-Rachel

Thank you, this was very helpful and easy to understand.