THE MEDICI: A TRUE DYNASTY
THE VERY BEGINNINGS; A SERIES BEGINS

Visconti, Sforza, Gonzaga…these are the names of some of the most powerful families, the most influential Houses, in the history of the Italian peninsula. But no such list would be complete without mention of the House of Medici, for there was no family as powerful or influential. Howard Means in his book, Money & Power: The History of Business states that the Medici were, “the greatest banking dynasty of its time and perhaps the most influential non-royal family in all of European history.”

While many consider the power of the Medici originated with Cosimo I, often called Cosimo the Elder, the patriarch of the family in the early 15th century, the true roots of this vitriolic and vital family begin much farther back, and it is there this story begins.

Considered the oldest ancestor of the House of Medici, the name of the lineage finds its genesis with this man as well. Though his true name has been lost to the vagaries of history, the man known as Medico di Petrone was born in 1046. Serving as the Lord or overseer of the territory of Petrone, “a fortified place since destroyed, and of which there only remains the church,” (Illustrations of the Life of Lorenzo De' Medici by William Roscoe, Thomas James Mathias). Medico served on behalf of the Ubaldini, the true Lords of Mugello (a territory a few kilometers north of Florence), Medico was also a physician of sorts, said to possess miraculous powers of healing. Such men were called ‘doctors,’ or, in Italian, medici. 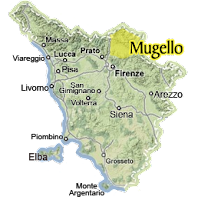 According to genealogists of the age, those that used the stars, planets and moons as their divining tools, Medico di Petrone was a descendant of the illegitimate line of Charlemagne. His miraculous healing powers served to confirm such heritage; it was a belief widely held up to and including the Middle Ages, that healing abilities were proof of royal descent. Such belief no longer holds any credence. Nonetheless, it set the family on a path of greatness, one that would live up to its destiny, both famously and infamously. 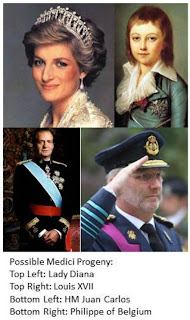 Excellent post, Donna. I just started reading about Lucrezia Tournabuoni, in order to learn more about the Medici line. I knew the line started a century or two earlier, I had no idea it dated back that far. But that makes sense with all the Lombard and families and movements. It's also fascinating how many of those families started as condottieri.

Thanks, Marie! I'm aiming for this series to reveal the depth of the Medici brilliance.