WOULD YOU READ THIS BOOK?
READ WHAT SOME OF THE TOP EDITORS
AT THE TOP PUBLISHING HOUSES HAVE TO SAY ABOUT IT

Not to be too mysterious, but for the real surprise, read all the way to the end!

It’s wonderfully atmospheric—I really got a sense of Newport, the glamour and the social striving, but also the class tensions and prejudices that exist. Ms. Russo is a lovely writer, with a real feel for her characters, especially Pearl and Ginevra. The question of why (cut for spoilers) immediately intrigued me. I enjoyed watching how their friendship evolved on even as it pushed up and against social norms of the time... There’s a lot to like here.

FROM HARPER COLLINS:
Russo is a skilled writer and her characters are accessible and likable; I was really worried for Ginevra, so the ending was very satisfying.The story surprised me. I think this has potential to be a commercial title—especially considering the recent appeal of Downtown Abbey and the like.

I absolutely loved the setting, and the author did a great job of evoking the mannerisms of the time and place.

FROM SKYHORSE
I really fell in love with this: the stunning setting of Newport in the Gilded Age, inside looks into both the wealthy and their servants (neither fully happy), feminism, and the power of female friendship, and even a dash of romance. Pearl and Ginevra are strong, engaging protagonists, both as individuals and a pair. They are such fascinating characters ina fascination place and time...this world of the Vanderbilts and the Astors, of emerging feminism and the pull between independence and the expected notions of romance and family.

Intrigued? Ready for the surprise...these are all rejection letters. Yes, you read that correctly...rejections!

But I refused to hear no and I finally heard YES!

GILDED SUMMERS will be released in early summer 2018 by Creativia.

Two girls, Pearl and Ginevra, grow up in the singular moment known as the Gilded Age in Newport, Rhode Island—one lives above the stairs, the other below. These two young women must decide who they want to be in this world, and survive what it takes to get there…even if it includes murder.

Surrounded by Astors and Vanderbilts, Pearl fills her days with teatime and shallow friendships, yearning for something more. A chance meeting with Mary Cassatt sparks in her a secret desire to be an artist, a “new” woman. Meanwhile Ginevra, fresh off the boat from Italy, finds her own dreams out of reach as she joins the unwelcoming household as a servant and seamstress.

Kindred souls, the girls become fast friends but must keep their friendship hidden from Pearl’s controlling and social-climbing mother. Each summer, they meet in a hidden spot beneath the weeping beeches to talk of art and life, their struggles to break the barriers of their lives, and to draw inspiration from the writings of Lucy Stone.

But before long, the realities of adulthood begin closing in on them. Accepting a “suitable” marriage proposal, Pearl tries her best to fit into her new role, while Ginevra begins to harbor feelings of jealousy and resentment. The two young women must decide who they want to be in this world, and survive what it takes to get there…even if it includes murder.

Going behind the façade of this glittering era, Gilded Summers is a gripping, richly detailed story of friendship, prejudice, and life-altering choices. The novel will appeal to fans of Downton Abbey and The Divine Secrets of the Ya Ya Sisterhood. 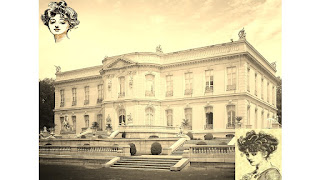 As a born, raised, and still happy resident of Rhode Island, so many of my greatest moments took place on the island of Newport, and they still are...my son recently married there. This book has been a dream of mine and I can't wait for this glorious place, these enigmatic people, and this intriguing tale to at last go out into the world.