PORTRAIT OF A CONSPIRACY:
DELETED SCENES.
THEY'RE NOT JUST FOR MOVIES ANYMORE

Just like movies, as a book goes through the editing phase, there are often great scenes that need to be cut for the good of the overall book. The first draft of PORTRAIT OF A CONSPIRACY: Da Vinci's Disciples Book One came in at over 500 words. I feel in love with the true facts of the horrific assassination that opens the book. I wanted every facet of the gruesome event to be chronicled in my book. However, the political machinations between the great Medici family and their rivals, the Pazzis, are the main focus of the book. With a breaking heart, but an understanding mind, I took the advice of my great agent and editor, and paired down the multitude of details on the assassination.

That doesn't mean they are lost forever. Today I begin a series that will highlight those deleted scenes...just like a deluxe edition DVD.

If you haven't read the book yet, here's what you need to know: 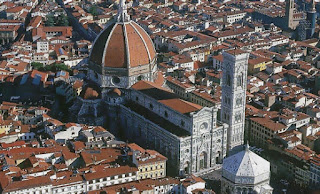 In Florence on Ascension Sunday in the year 1482, the Pazzi family, with the help of mercenaries, priests, and possibly someone higher up in the Vatican hierarchy, plan the assassination of the powerful Medici brothers: Lorenzo de' Medici, the defacto ruler of Florence, and his peace loving brother, Giulino. The attempt takes place in the great Duomo of the largest cathedral in Florence,Santa Maria del Fiore (Saint Mary of the Flowers). 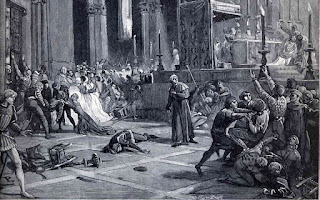 As the madmen draw their daggers, chaos and blood burst within the packed cathedral. Giuliano falls.Lorenzo escapes...but how? Here is the scene, firmly rooted in the actual history, that reveals it.


“Giuliano!”
In the haze of half-life, Giuliano saw Lorenzo’s mouth form his name but could not hear the voice, the voice of his childhood, of his conscious, for the buzzing in his ears drowned all else out. He felt no pain, only gladness as he watched the attackers fail to assault his brother.
Their eyes met and, through them, all that ever lived between them—every moment, every word, all their love—was spoken for the last time.

Giuliano’s bloodless lips spread as if in smile, as he watched his brother disappear from his sight, alive and safe, beyond the heavy bronze doors and into the sacristy. He turned his whole head, or did he—he could not tell—to the door, now closed where he last saw his brother. Now instead death appeared before him and he greeted it wide-eyed, beautiful mouth open in silent denial.

Nightmares exist in the wakeful moments of day

Learn more about PORTRAIT OF A CONSPIRACY: Da Vinci's Disciples book one here and here.