FROM BASTARD TO POPE TO THE BANE OF HENRY VIII:
GIULIO DE’ MEDICI,
THE NEXT MEDICI TO DISTINGUISH HIMSELF

He couldn’t have known, at the time of his birth, that his father had been brutally slain exactly one month to the day before he was birthed into the world. And yet Giulio, the child of Giuliano de’ Medici and Fioretta Gorini, must have found out, must have learned the truth of his father. 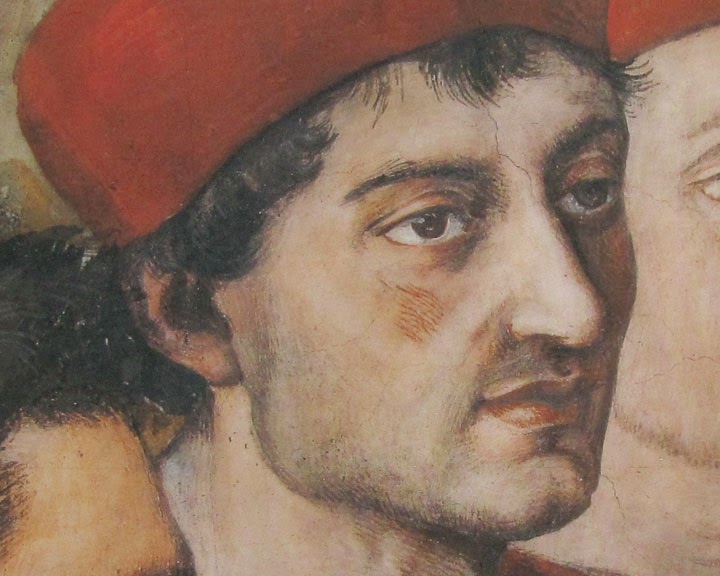 Though most call him Giuliano’s bastard, further research leaves one to believe that, through the power of Lorenzo de’ Medici—the strength of Il Magnifico—he was legitimized in the eyes of the law and the eyes of the church. It was contended that Giuliano and Fioretta were married in secret, per sponsalia de presenti, and that, somehow, proof of this was ‘discovered.’ By virtue of a well-known principle of canon law, Giulio was a bastard no more.

He was raised in his uncle’s house, raised as one of Lorenzo’s own children, with an intensive, all-encompassing, and Humanistic education. He was cared for by the very nurturing Clarice. And yet, when he learned, when Giulio found out the details of his father’s horrific assassination, what must it have done to his young mind? Would the machinations of the Medicis and the Pazzis, which led to his father death, blight him against such a way of life?

It would appear to be so.

Little is written of Giulio’s childhood, adolescence, or young adulthood. Knowing the tight bonds and the dominance of the Medici clan, it is safe to assume these years were spent in deep study and in learning the ways of politics and despotic ruling by Lorenzo’s side. After the death of Lorenzo, incurring the misguidance by Piero, Giulio, like most of his family, went into exile in 1494. Traveling the Italian countryside brought him honors nonetheless; he became a Knight of Rhodes, a military association, and a Grand Prior of Capua. Like his cousin, his obeisance to the Roman Catholic Church would deliver his freedom to him once more.

Giulio comes into his own in 1513 when is cousin, Lorenzo’s son, now Pope Leo X, conferred on Giulio the title of Cardinal and made him legate at Bologna. Leo X’s propensity for a pleasure-loving lifestyle, left much, if not all, of the papal governing fell to Cardinal Giulio, where he proved himself to be a more than capable administrator.

The zucchetto, the papal cap, changed heads quickly. Upon Leo X’s death in 1521, Adrian VI was quickly elected to the position by the College of Cardinals, Giulio doing much to push his victory. But Adrian’s reign was short lived. He took the papal throne in January of 1522, then left it, by his death, in September of 1523. In November of 1523, Cardinal Giulio became Pope Clement VII.

Clement brought great diplomacy and economic stability to the papal states. However, there is much greater evidence concerning the areas in which he failed. Most prominent was his failure to either see the threat of the Protestant Reformation or his timidity to do anything about it. For this, he was often criticized not only by members of the Catholic church but by the people themselves. It appeared to many that he was, though ordained as the pope, more ingrained as a Medici and a Italian prince.

Politically he wavered, switching his allegiance between France and Spain as easily as the wind changes direction. Such ambiguity led to one of the two major events in the life of Pope Clement VII.

His wavering support of the Emperor Charles of Spain brought about the Sack of Rome in 1527. In truth, the marauding of the Holy City was an act of mutiny on the part of Charles’ overworked, under-paid military, it nevertheless brought Charles a crucial victory over the League of Cognac, the alliance of France, Milan, Florence, Venice, and the Papal States.

As for Rome itself, it was laid to waste; the pillaging—and starving troops—left leaderless by the death of Charles of Bourbon at the very inception of the siege, proceeded to defile the city, raping, murdering, and vandalizing to their hearts content. Clement VII himself barely made it to the safe haven of the Castel Sant’Angelo. Although he agreed to pay a ransome of 40,000 ducats and cede many territories to the Emperor, he was held prisoner in the castle for six months. He found his escape through bribing Imperial Guards who disguised the pope as a peddler. Once free, Clement took shelter in Orvieto and later Viterbo. He did not return to Rome until October of 1528, where he found the city nearly abandoned and wholly ravaged. To add insult to his downtrodden life, back in his home city of Florence, those who always longed to see the mighty Medici fall, took the opportunity to once more exile the family from the city walls.

In June of 1529, much of his papal power was returned with the Peace of Bologna, bringing accord between the warring parties. The Papal States regained some of their lost cities and the Medicis were returned to power in Florence by the benevolence of Charles V. But drama was not yet done with Clement VII.

In the same year that Clement endured the sacking of his great city, he was being pestered on yet another front. A hedonistic, egotistic king who wanted a divorce from his wife, a divorce only the pope could grant. Through Cardinal Wolsey, Henry VIII’s demands on Clement were ceaseless. Demands Clement continually denied. While on the surface it may appear that Clement did so in keeping with the dictates of the Catholic religion, in truth, his actions were motivated by his keenness to keep his relationship with Spain, Henry VIII’s wife Catherine of Aragon being the aunt of the Emperor Charles, in tact. The act severed the relationship between Rome and England, indeed, between England and the Roman Catholic Church, a relationship never to be healed.

Clement had pacified Spain, broken with England. But what of France? In an effort to repair this alliance, Clement (or rather, in truth Giulio de’ Medici) betrothed his cousin’s daughter, Catherine, to Henri of Orleans in 1533. This young man, a man already in love with another woman, would become, due to the early death of his eldest brother, King Henri II.

Clement died, at the age of 56, in September of 1534. Rumors abounded that he was murdered, poisoned by mushrooms. It was a strange fashion of the age to give such salaciousness to deaths at the time, so such a theory cannot be given any great credence. For the most part, Giulio/Clement’s historical imprint is one of confliction and confusion; he is remembered as a Medici first, a man of the church second. His intelligence was remarkable while his diplomacy was deplorable. His personal life was beyond reproach yet despite good intention, the labels of heroism and greatness are denied him. And yet there is one lasting legacy of such magnificence, perhaps all else may be forgiven.

Just a few days before his death, Pope Clement VII commissioned a young sculptor and painter by the name of Michelangelo to render The Last Judgment on the altar wall of the Sistine Chapel, an act that gave birth to a true wonder of the world.

A very good man dealt a very bad hand, it seems to me.

In addition to commissioning Michelangelo's "Last Judgment" and Medici Tombs, Clement VII / Giulio de Medici also commissioned Raphael's greatest masterpiece, "The Transfiguration," as well as his architectural masterwork, the Villa Madama. On top of that, in his autobiography Benvenuto Cellini attributes much of his success to Pope Clement VII - whom he describes as having "excellent taste."

While Giulio de Medici's pontificate reads like a Greek tragedy -- tangled up in no-win scenarios that he did not create -- his legacy of patronage is extraordinary.