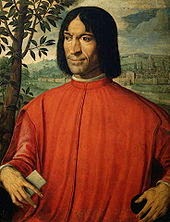 It has been said, and said quite often, that there are pivotal points in history. But history is made, and by those with the intelligence, inventiveness, and courage to do so. Such is the life of Lorenzo de' Medici.

The previous posts concerning this intriguing man left him at the cusp of adulthood, at the cusp of the greatness that would become his to claim. On December 5, 1469, Lorenzo’s father, Piero, died, having ‘ruled’ for only five years. It was no more than two days later when a contingent of eminent Florentine citizens approached Lorenzo, respectfully requesting him to continue the Medici rule of their state. At the tender age of twenty, Lorenzo obliged, ruling much as his grandfather and father before him had done, from behind the scenes, never holding any official public office. Though groomed for such responsibilities from birth, it can be rightly surmised the heavy weight of such a burden at such a young age. But his duties did not stop there. He became the leader of his family—a large one by all accounts—as well as the head of one of the largest banking institutions in Europe. And he did it all with aplomb and distinction. 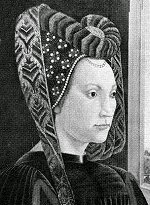 By less than a year, Lorenzo’s father was able to witness the marriage of his oldest living son. The proxy marriage of Lorenzo de' Medici to Clarice Orsini took place on the 7th of February, while the actual hand-clasping took place on June 4, 1469. Such a coupling forged together the powerful Medici clan with one of the oldest and most powerful noble families of Rome. It was a political maneuver of genius proportion; it was a fruitful and lifelong establishment.

As his ‘reign’ continued, Lorenzo brought ever greater notoriety and prestige to his house, especially when, in 1471, he orchestrated an agreement with Pope Sixtus IV, assuring that the Medici bank would continue to handle the papal finances. In 1472, he further endeared himself with the people of Florence—winning their hearts completely—when, using some of the family’s own fortune, he imported large amounts of grain as the city was struck by a bad harvest. His quick action and self-sacrifice saved the city he loved so much from an assured and imminent famine.

But the journey to becoming Il Magnifico would not continue upon a smooth path. The murder of his brother Giuliano, the betrayal of so many he thought were his friends and colleagues, would forever change the benevolent man Lorenzo was at heart. His revenge upon them was fearsome and without the due course of justice, a revenge enacted against so many, including the Archbishop of Pisa. His actions plunged the city/state of Florence into a declaration of war with not only the Vatican but with the King of Naples. The ill-effects of the war upon the people, turned many against Lorenzo. But, as the pain and rage of his brother’s death diminished—for it would never leave him completely—Lorenzo knew he must salvage the situation, realizing his wrath, his pain, had taken him out of control and had put his people in danger, a danger they knew and resented him for.

In the most bold and daring move of his life, Lorenzo—without the knowledge or blessing of the Florentine government—traveled by sea to Naples, placing his life and the fortune of his city in the hands of King Ferdinand I (Don Ferrante). According to the Encyclopædia Britannica Eleventh Edition, "Ferdinand was gifted with great courage and real political ability, but his method of government was vicious and disastrous. His financial administration was based on oppressive and dishonest monopolies, and he was mercilessly severe and utterly treacherous towards his enemies." Among the many interesting hobbies the king participated in, hunting was one of his favorites, both of the four-legged and the two-legged sort. And like those that lived in the forest, were this king to successfully make a kill, he would have his prized stuffed. Dead, embalmed, and dressed in the costumes which they wore in life, his deceased enemies lived on in the king’s ‘museum of mummies.’ Thus was the man in whom Lorenzo entrusted his life

The gamble proved fruitful; Lorenzo charmed and persuaded with great acumen, convincing Ferdinand that it would do great harm to all of Italy to be divided by a war such as the one beating upon their doors. With the gift of peace in his hands, Lorenzo returned to his homeland, received with the open arms of the people and the great joy of all. His eminence over Florence would never again be called into question, never again be challenged.

Il Magnifico’s dominance and his influence would continue to shape not only Florence, but all of Italy until his death in 1492. Lorenzo de’ Medici’s intuitive gift—among his many gifts—for recognizing true talent in others would bring these individuals to the fore of life in the Renaissance, people who would change all of life as we know it, people who were the Renaissance.