TRUE AND LASTING POWER
COMES TO THE MEDICI

Re-entering the world of the Medicis, the moment has arrived for ‘the’ generation, one so powerful that most biographies, studies, and genealogical trees only begin here. Herein is the man lauded as not only the founder of the Medici bank but labeled as well as the founder of the family, a man so accomplished and admired, little  to nothing is mentioned of his siblings. Here we have Giovanni di Bicci de Medici.

One might assume, with such profound and long-lasting attributions, that the man was born (in 1360) with all the tools close at hand to bring him quickly and easily to such a level of glory. It would be a poor assumption.

Giovanni’s father Averardo di Bicci (both men were called Bicci during their lives, and while it appears to have been a common nickname for men in Florence at this time, its meaning and derivation are unknown) was naught more than a wool merchant. Indeed, he acquired great wealth in the simple profession, but, upon his death, broke his fortune up into pieces—a little to each of his offspring as well as a piece for his wife. (In the fecundity of text on Giovanni di Bicci and his father, Averardo di Bicci is credited with ‘five sons’; however, on every family tree and genealogy unearthed, only two sons and a daughter can be confirmed . The possibilities for this disparity can be attributed to the poor record keeping of the age, the fact that Averardo di Bicci’s great-grandfather of the same name sired many sons, or that the other sons were bastards, and therefore would not find a place on any family tree.) With such limited resources then, how did Giovanni di Bicci come to wield such power? 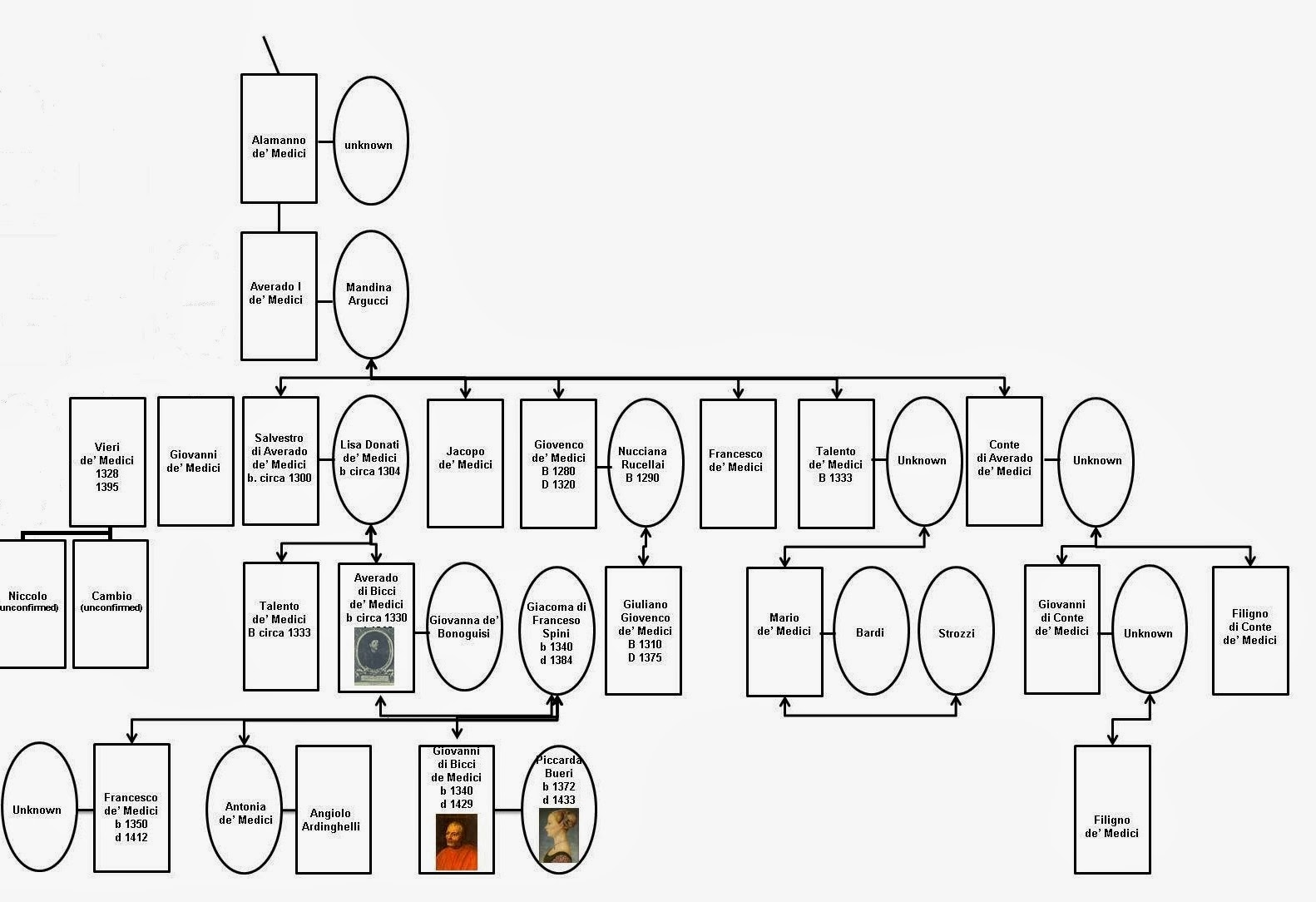 (who in the modern era would actually be Giovanni’s great uncle). Between the years of 1348 and 1392 Vieri asserted all of his professional efforts in establishing a financial institution, on a large scale, with branches throughout Europe. Two of his outstanding apprentices, who later became minor shareholders, were Francesco, son of Vieri’s nephew Averardo di Bicci, and Francesco’s brother, Giovanni.

Early on Giovanni di Bicci showed astounding perspicacity for banking and for business and soon became one of Vieri’s most important ‘employees.’ His mild and affable character made him a man not only to be revered in the professional sector, but a valued and loyal friend among the lofty ranks of Florentine society. And yet his was an unassuming personality; he had little care for fineries and dressed himself simply and lived as such as well. His greatest joys he found in the serenity of his family and in his accomplishments in his profession. He taught his sons Cosimo and Lorenzo to live in a like manner, to give back to the world as much as they were able to gain from it, a lesson both learned well. 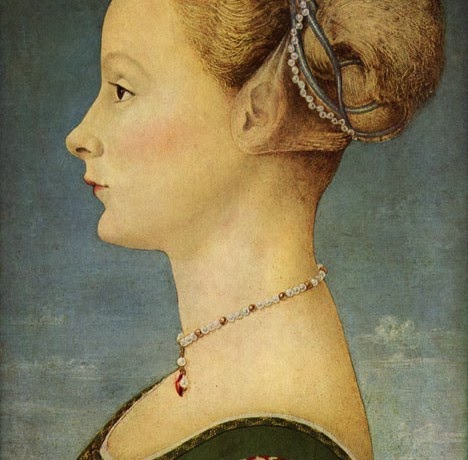 Giovanni di Bicci’s wife, Verona born Piccarda Bueri (eight years his junior) brought with her a dowry of such esteem, Giovanni was able to purchase the Rome branch of his great uncle’s bank. The wedding brought not only much needed funds to the Medici clan, but prestige as well. Piccarda was born of a noble father, Edoardo Bueri, a member of an ancient lineage of Florence nobility. Though living in Verona at the time of Piccarda’s birth, they returned to Florence as Piccarda reached a marriageable age. The union took place in 1386, when she was eighteen.

Piccarda was renowned for her great beauty; Giovanni di Bicci was not. And yet Carlo Marsuppini, a noted Florentine Humanist and Chancellor, in his eulogy written for Piccarda, compared their love to that of famous couples of antiquity…deep, profound and everlasting, speaking greatly to the inner beauty of both.

Vieri retired in 1393, leaving the majority of his business holdings to his two sons, Niccolo and Cambio. Not nearly as gifted as their father or their cousin, the two brothers quickly brought that portion of the business to a swift and ignominious end. But it would not cease to exist; Vieri’s years of work would not be for naught. With his acumen and Piccarda’s money, Giovanni di Bicci, having already been in charge of the Rome branch of the Vieri bank, used his wife’s dowry to purchase that branch of the bank outright in that same year for the sum of 1500 florins. By 1397, Giovanni had expanded the growth and commodity of the business so as to bring the headquarters back to Florence while keeping a firm hand on financial matters in Rome, becoming—at various times—the banker to more than one Pope. Thus began once more, the growth of the now named Medici Bank to all corners of Europe.

On the surface of Giovanni’s biography, it would appear that he had little interest in the political arena, often paying the fine rather than serving in public office. And yet, with an economy of involvements, his influence grew. In practice, he furthered the Medici policy, upheld the tenets of democracy. But, as was quite typical of the age, the family used the freedom of a democratic system to further their own power, riches and influence. Beginning in 1402, Giovanni di Bicci was elected as Prior of the Arte del Cambio, the Banker’s Guild, an office he would hold three times. In 1407 he served as governor of Pistoia and in 1419 served as a member of the Dieci di Balia (the Ten of War, sometimes called the Ten of Mercy, a judiciary branch of the Florentine government). And in 1421, he was nominated as gonfaloniere of justice, the openly acknowledged highest rank in the Florence government system. 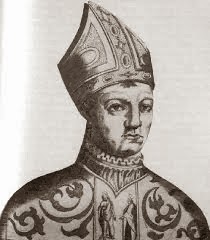 Perhaps Giovanni’s most daring political move was to lend his support to his customer and friend, Baldassare Cossa, destined to become Antipope John XXIII during the Western Schism. In an attempt to break the schism, the Council of Pisa deposed Gregory XII and Benedict XII, electing Alexander V. Alexander passed away soon after, leaving Cossa to be elected in his stead. Unfortunately, Cossa’s immoral predilections—womanizing and murder—he was then deposed by the Council of Constance in 1415. Giovanni was quick to pay the heady price of 30,000 florins for his friend’s release.

To look beyond Giovanni di Bicci’s professional and political achievements, we find perhaps his most profound and lasting legacy. He was devoted to the production of great works of art, a devotion that would become a defining characteristic of the family, one that would one day bring the world the likes of such men as Sandro Botticelli, Leonardo da Vinci and the great Michelangelo.

Giovanni was a sponsor, in every sense of the word, of the great North Doors of the Baptistery, giving his money as well as his time to the project. In addition, he had the walls of his home on Via Larga frescoed, an uncommon practice at the time, a home whose furniture including pieces painted by Dello Delli. Giovanni was instrumental in the great architectural achievements of his time, including the construction of the Spedale degli Innocenti (The Innocents Hospital—a children’s hospital) designed by Filippo Brunelleschi , as well as the reconstruction of the new church, San Lorenzo.

Giovanni di Bicci de Medici died in 1429 leaving not only a fortune—most assuredly the largest in Florence, in the Italian States, and perhaps in all of Europe—and a political power base that would forever alter the course of his descendants, he also left a legacy of business innovation and artistic support that would forever impact the world. His genuine kindness and concern for others would be a staple of a family destined to achieve greatness. At the moment of his passing, he asked his wife of forty-three years to care for his children (by which he meant all their descendants as many of their children were already married with children of their own by this time). Piccarda swore to do so, yet it seemed as if she could not do well without her Bicci, falling into a profound sadness she was never able to rise above. She followed him in less than four years , passing in 1433. Together they are entombed in the Old Sacristy of the Basilica di San Lorenzo.