The next generation of Medici, the sons of Bonaguinta, Filippo, and Alamando (those born in the late thirteenth/early fourteenth centuries) number no less than seven; among there number were many hard working, devoted Florentine citizens, contributing to the growing glory of the city, including two men who served as priors and, ultimately, as Gonfaloniers…Governors of Florence. 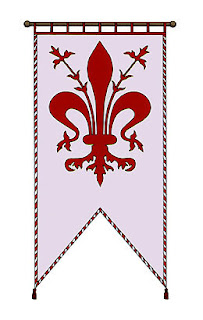 Bonaguinta’s son Ardingho boasts a most impressive resume, including the first of the clan to hold the office of Gonfaloniere of Justice. The name itself derives from the early Italian medieval word gonfalone and from the ancient word confalone. In both cases, the word described a type of heraldic flag or banner (pictured here the gonfalone of Florence). As Gonfaloniere it came to imply the ‘banner’ of authority. Ardingho also held the post of Prior twice, once before and once after his election to Gonfaloniere in 1296. The Gonfaloniere of Justice was elected from the nine citizens who formed the government, specially the Priori, positions held by different men every nine months. However, once a gonfaloniere, the prestige would linger forever, on both the individual and his family. Thus began the true political influence of the Medici family. 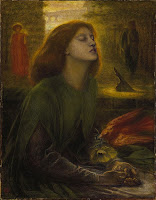 With Ardingho, we find, for the first time, the name of his wife (though pictorial family trees ‘connect’ offspring to the mother, previous historical records give no indication of the names of the wives and mothers; a telling omission in and of itself). Though little, in truth nothing, is known of Gemma de’ Bardi herself, the Bardi would become an influential family in Florence, in the realm of banking, no doubt influenced by the Medici themselves, though never reaching the Medici scope and power. Known and interesting is the fact that one of Gemma’s familial descendants, one Simone de’ Bardi would marry one Beatrice Portinari (pictured), the Beatrice of Dante’s unrequited heart and the inspiration for his Divine Comedy.

Little is known of Ardingho’s brother, Guccio who was birthed late in his mother’s life and lived for only seventeen years.

Filippo was the busiest of his generation, giving birth to four sons, the jackpot for a medieval Italian family. The oldest, Arrigo, appears to be a persona non grata, as does his closest sibling, Alamanno (please keep in mind that these men are not to be confused with men of the same names in subsequent generations of the Medici, men who would make their mark on the world). Third son, Giovanni—one of the first of many by that name—held the office of Treasurer of the Commune; he did not marry or reproduce.

Cambio de’ Medici, the last-born son of Filippo seems to have lived a quiet life out, perhaps holding the position of Prior at some point, but doing so with little merit.

Alamanno’s only son Averedo I would be the offspring of his generation to esteem the most distinction; making great use of his short life of thirty-three years. Serving once as a Lord Prior, he served as Gonfaloniere not once but twice, in 1299 and 1314. He also married well, to Mandina Argucci, a prominent and long established Florentine family. Averedo was also the first Medici to begin purchasing land, launching a vast operation of acquisition in the Mugello area of the Florentine district, completing the circle of the Medici family that began there. With Mandina, Averedo I would make the greatest contribution yet to the Medici clan…giving birth to men who would not only change the fortunes of the Medici family, but who would change the very landscape of Florence itself. 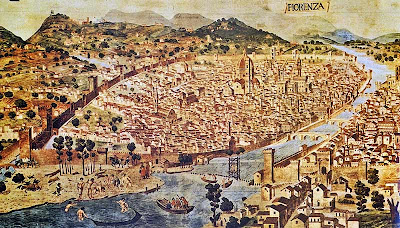 I'm actually writing a paper on the Medici family for my Renaissance and Reformation course and am finding a new passion for a period I usually overlooked. I think they get a bit of a bad rap for their 'tyranny' over the virtues of the republic, but I think they weren't any worse than many of the other families of the Italian city-states!

So true, Elizabeth; they simply happened to be the best at working the system that was in place long before they came along. But they did more. Many, many of them (Cosimo and Lorenzo especially) are greatly responsible for the enrichment of life through art, architecture, music, literature, science, math and more. Yes, to the modern sensibilities their ways were tyrannical, but they often used the power acquired for good. Best of luck with your course work!