In keeping with the mixed blessing theme of our trip, the bus driver launching us from the beautiful clutches of the Paris city looked like a club wielding Viking, sounded like a grunting caveman, and possessed all the warmth of a dead reptile. After we hauled our luggage the four or five blocks down the narrow, bus-prohibitive streets, he roughly grabbed our bags from us in silent unwelcome and launched them into the storage compartments with complete lack of care. After a short and meaningless narrative from our inimitable guide (it began as information on Normandy, our destination, but ended with something about the English) we all lapsed into a silent, welcomed lull where many slept, some even snoring.

Congested, busy streets where old and new buildings stood like sentinels, one right after the other, on the very edge of the avenues gave way to wider spaces, moderately populated by manufacturing and industrial complexes. The landscape eventually morphed into rolling hills vibrant with every shade and depth of green, some in the symmetrical and somehow visually pleasing lines of farmland dotted with all manner of live stock, mostly cows, sheep and goats. Here and there majestic mansions were perched on the crests of plump hills, designed in a style that assures they hold a secret of this land's rich, historic past.

As we zoom past tall, thin, and stately Cypress trees, the sounds of the kids’ giggles, guffaws and, snorts harmonize with the low dulcet tones of whispering voices engaged in serious discussions. These stealthy conversations hash and rehash the intricate details of the intrigues swirling among them; intrigues worthy of the courtiers of King Louis’ Versailles.

We lunched at MacDonalds, the second time for myself and the small group that accompanied me to Versailles. I wasn’t surprised to find this particular place as crowded as the other; like the devil’s worst enticement, the convenience coupled with the bursting flavor of this fat-filled food is hard to deny. I was surprised and highly impressed to find that even here, at this very suburban location, the young people behind the counter fathomed, if not actually spoke, not only English but other languages as well. Is it that Americans just don’t have the need for other languages or is it merely our arrogance that only our own language matters? 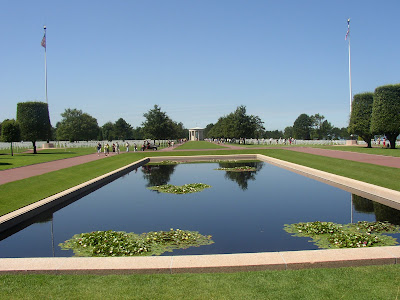 As we pulled into the lot of the Memorial at Normandy, we were advised this was not a place for laughter or raucous behavior. When I stepped into the meticulously manicured grounds, I wondered if the warning was completely necessary. Visitors to this place are naturally hushed by the reverent ambiance of the location, the very beach where the allied forces landed on D-Day and where the souls lost that day slumber in eternal rest.

Within sight of the rows of graves, the chorus, including my son and his distinctive bass voice, paid a musical tribute to the fallen heroes. The voices of the young singers reached out to the thousands of souls resting before them, thanking these men for their sacrifice, one that gave these youngsters the freedom they enjoyed and recognized as a birthright. The area around the minstrels became silent and in the aura the strands of lilting notes created, the people gathered, called forward by the ethereal sound. Foreigners as well as Americans were drawn by the beautiful voices as well as the palpable poignancy of the moment. 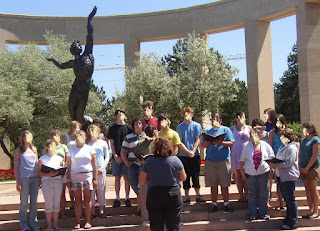 When the choir sang the traditional spiritual Elijah Rock and offered the words that asked for the Lord to raise them up, my throat grew tight. I could feel the emotion rising in my chest. I looked out at the row upon row of cream marble crosses ablaze against the deep green of the lush grass and prayed that he had, that God had rewarded these selfless men in his kingdom. When the Hummingbird Trio sang the Star Spangled Banner, the welling feelings could no longer be contained; not only mine but that of many of the adults around me. Tears streamed down luminous faces; tears from the pain of the song’s beauty and the voices singing, tears of deep, heart-wrenching gratitude and tears for the tribute offered to the great men in whose honor this memorial stood.

Although Ms. Y could not see the faces of her audience as she conducted the singers, she could see the performers’ faces and expressions.

“I could see their reactions,” she later told me. “I realized this was different for them than anything else.”

Did these young people, none of whom were born before 1988, none of whom had ever known the true hardships of a devastating war, understand the depth and import of the moment? Or did they merely see, in our tear-streaked faces and trembling lips, the power of the forces they conceived within their audience.

When the concert concluded, many audience members felt compelled to approach us, to tell us how much they had been touched by the performance. A family from the Netherlands spoke to my mother and I, asking where the singers were from, telling us how impressed they were with the performance and how it touched them. Ms. Y spoke with an American man and his wife. He had served in WWII and his trip here was a pilgrimage. He told her, “Your being here and doing this means more to me than you could ever know.” And he welled with tears.

We hugged our children and congratulated them; I remember thanking Devon for the precious moment he gave me that will be with me until the end of my days and beyond. 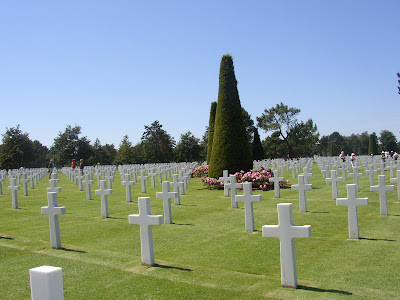 At this point we were all free to go our own way. Ms. X brought those interested to the a spot where a Rhode Islander lay with a neighbor from Massachusetts to his left. I read the names on the crosses, repeating them in my head like a prayerful lament. In the next row a different inscription caught my attention, caught my heart, and my mind and has not leg go since. It read: 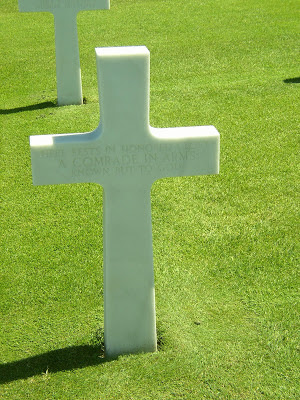 That such a brave soul, who gave the ultimate sacrifice, should spend eternity in such anonymity felt grievously wrong.

We wandered a bit aimlessly, our guide no where in sight, and let the spirit of the surroundings inundate us. Standing in this place, where they fought and died, is to become possessed by their spirits. They have been called by some the greatest generation, though the depth of bigotry, prejudice, and chauvinism of that age has often troubled me. What could never be questioned or doubted for even a moment is the courage of these men. Save for those in our armed forces, whether in men or women, the modern age is bereft of the honor, duty, and responsibility these men displayed, their selflessness has become an extinct spirit in our ‘all about me’ society. 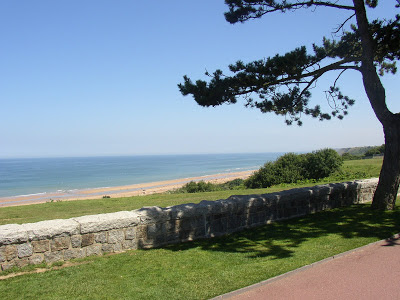 We stood above the shore on a grassy stone-wall rimmed knoll and looked down upon the cream-colored sandy beach. We found the table top diagram delineating the paths the allied forces took. The angle was steep as we looked down it and could imagine the horror of looking up it as guns and canons and faces full of anger and hate looked down. It is a wonder any of them survived, let alone survived a triumph. It is one of history’s greatest examples of the power of true determination and will and of good’s ultimate victory over evil.

Our next stop, which may have been better scheduled before our trip to the cemetery, was at the Caen Memorial. Although we had very limited time here, we were able to experience two powerful and moving documentaries. Both lasted about 15-20 minutes.

The first was entirely comprised of actual footage and presented in split screen format, the allied forces footage on one side, the Germans on the other. I wondered if the intent of these films was to record history for posterity or was it the ego of the men who wage war that assured that such a depth of detail would be embedded forever on film. Every step of D-Day was revealed, the young, cocky faces of the Allied men and boys as they begin the journey on the landing crafts, as the Germans position and arm their guns; to the battle itself, the loss of limbs and life, to the victory, so dearly paid for.

The second film detailed the military maneuvers of the war and was presented in an almost video game format with computer-generated images. Though the ending was known to all, we held our breaths and watched. As the Allied colors spread over and replaced those of the enemy on the silhouette of Europe, a rousing cheer rose in yet another heart-touching chorus.
Posted by Donna Russo Morin at 8:50 AM