Our second day in Paris began with the promise of all the sweltering heat of its predecessor but, unlike the day before, our plans held a hint of possibility.

We began with a three-hour bus tour…on an air-conditioned bus…with an additional guide! Remarkably, our sorely lacking guide had the wherewithal to hire not only a knowledgeable guide but also an informed, intelligent, and charming one. From the comfort of a sitting position, with soothing, cooling air caressing our skin, Lady A showed us the Bastille Monument (pictured left), the Arc d’Triomphe, the Hôpital des Invalides and the Eiffel Tower (most of which we would visit up close and in person as our trip progressed). With spirit and personality, Lady A entertained and educated us with jokes, songs and quiz questions for which she gave points for the correct answers. Enchante!

The vehicular junket culminated at the Cathedral de Notre-Dame. Looking up at the large Gothic structure looming overhead, the high mid-day sun blurred our sight and, in the haze, perhaps the vision of Quasimodo hovering among the gargoyles and ramparts.

Standing on one of the many concrete benches in the courtyard of the cathedral, Lady A tutored us on the magnificent structure. Her knowledge and spirited narration drew in many of the milling crowd, those who could understand English, enlarging our number.

As we stood in the large courtyard, I heard more languages than I could recognize. The faces around me reflected every variance in facial structure the world has to offer and I felt part of the world, a member of the world society. It was a welcome feeling, a feeling of being a part of something cohesive and strong. If only it could always be this way. 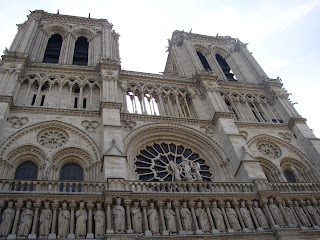 The Cathedral de Notre-Dame is located on the east side of Paris. It still serves as a Roman Catholic Church and is the seat of the Archbishop of Paris.

This Gothic building, whose construction began in 1163, is worthy of detailed study and a visit of many hours. Of particular interest is the King’s Gallery, the row of royal statues adorning the western façade. According to Lady A, legend holds that during the first Revolution, angry Parisians chopped off all the heads of the noble sculptures. 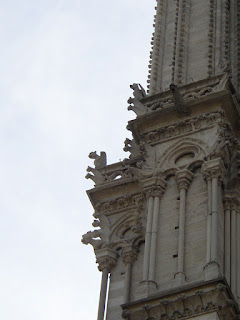 Another delightful detail of the cathedral is the renowned gargoyles. They are, in fact, the structure’s drainpipes.

After my mother and I crossed Paris’ Le Point Zéro (legends holds that if you pass over Le Point Zéro--an octagonal marker from which all distances in Paris are measured--you will be assured to visit the magnificent city again; we each crossed over about twenty times), we entered the cavernous interior. There was a long line to enter, one politely formed naturally by the convivial milling crowd without direction, but it moved quickly. Mass was being conducted and little was needed to keep the crowd of hundreds hushed; the piercing piety of the interior demanded respect readily given.

Prayer was followed by lunch where the bread was, of course, marvelous, the filling within tasty but meager. A crepe purchased from a sidewalk vendor with a friendly smile sweetly completed the repast.

Our time at the cathedral over, it was back on the metro once more, again feeling like the sheep whose herder has lost his way as well as all his mental acuities.

We arrived eventually at the Arc d’Triomphe; our necks again craning to see the top of this architectural wonder. Our guide gave us none of the intriguing history of the structure. (We had, unfortunately, said good-bye to the effervescent Lady A at our previous location, watching her walk away like a child watching his mother walk away on the first day of kindergarten.)

“There is the entrance to the stairs,” informed our guide, pointing out the egress to the 284 stairs leading to the top of the monument, “if you want to climb. Be back in an hour.” And with these insightful words, he was off once more in search of a café. 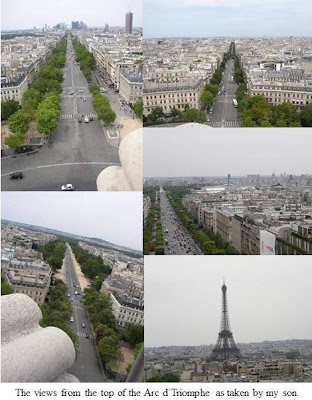 The Arc d’Triomphe is located in the very center of the Place de Charles de Gaulle (previously known as the Place de l’Etoile) and at the western end of the Champs-Élysées. It is the apex of the L’Axe historique (historic axis). The precision of the axis--a line of monuments, buildings and thoroughfares--is so exact, the Arc can be seen when standing in line over three miles away. Construction on the monument, commissioned by Napoleon I, began in 1810 and was not complete until the 1830s.

Within the majestic confines of the Arc is the Tomb of the Unknown Soldier from the First World War interred on Armistice Day 1920 when the eternal flame was lit.


My mother, Mrs. Y and I sat the climbing out, choosing instead to sit in the shadow of the structure’s strong base. We spoke mostly of our egregious grievances against our befuddled marshal and time passed in this catty but enjoyable manner. When the first group of youngsters returned to the bottom, they greeted us then asked if we had already made the trip to the top and back. We informed them that we hadn’t gone up at all and they moved on.

Looking over at Mrs. Y I recognized a look, one that I would see quite often as the trip progressed, a look dominated by an ironic smile and laughing eyes. I asked what amused her so.

“These kids think we,” and here she pointed to us, three of the oldest members of the group as well as ones with infirmities, “beat them, up and down 284 stairs.”

Mom and I laughed with delight; my first great laugh in Paris. 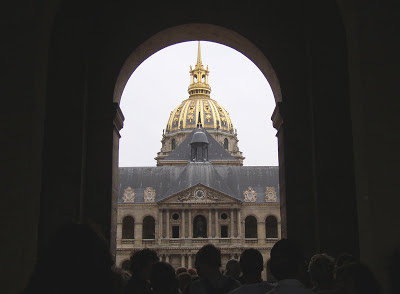 The next ride on the metro was as stimulating as the last but at the end, we found ourselves at the Hôpital des Invalides, the hospital for invalids or Les Invalides for short. Les Invalides (picture depicts the dramatic entrance to the grounds) was built under the direction of Louis XIV as a hospital and retirement home for war veterans. It still serves that purpose as well as being a museum and monument, most notably to that of Napoleon. 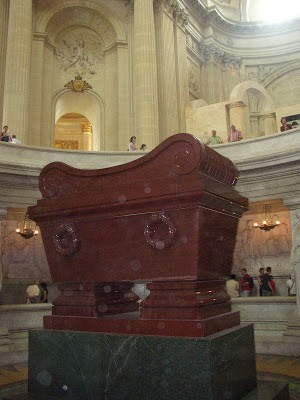 And, once inside, we stood above Napoleon’s Tomb. It was hard not to be impressed by the beauty of this memorial. Within this opulent and ornate tomb lies the remains of Napoleon I…or do they. It is rumored that many French citizens have requested the tomb be opened and the remains tested for DNA as well as to determine the true cause of Napoleon’s death. The French government refuses to perform the tests. The layout of the museum surrounding the tomb is an easy to follow circular pattern and there is just enough exhibits, with easy to read (in three languages) descriptions at each, to engage without overwhelming.

Dinner this evening was better than that of the previous night but just as uninspired. Salad followed by baked chicken breasts with the same thin brown gravy and roasted potatoes. There were no offers of drinks other than the too few pitchers of water and there was, astonishingly, no bread. There was a refreshing three fruit flavor sorbet; its striking coldness chilled a path down my hot intestines, now even hotter in the airless, small backroom of the café.

Getting lost on our way to the evening’s activities brought the anger against our guide to an erupting frenzy; we rode the metro to unneeded stops, turning right around and getting back on the stifling, smelly subway. Our ire became all the more intense when he revealed that our destination required the climbing of steep stairs or the extra, out-of-pocket cost of the tram. My throbbing feet, ankles and knees made my choice for me. Most of the adults joined my mother and I on the Funiculaire de Montmartre, a funicular railway operated by the Régie Autonome des Transports Parisiens that climbs the hill when approached from the south.

At the base of the hill, as the young people separated from us to take the stairs with exuberance indicative of their undeniable youth, street vendors aggressively approached my son. He was frightened when one man grabbed him by his pinky finger, barking at him in a language he didn’t recognize, asking for ten euros. At some bad advice, my son gave him the money and ended up with a cheap yarn bracelet. Tip: while these men may come on strong, they really won’t hurt anyone. If they did, they wouldn’t be allowed to take up post on so many corners in the real touristy areas. Stand firm, say ‘no’ with real conviction and ignore them thereafter and they won’t bother with you anymore. I believe I truly scared the crap out of the one who approached me as I released all the anger and frustration upon him that manners prevented me from unleashing on our guide. I not only barked at him, I’m quite sure I stabbed him with eyes like daggers and barred my teeth at him much like a rabid dog. He quickly turned tail and ran.

Montmartre reminded me of an east coast tourist trap (Cape Cod, Newport and Key West come quickly to mind) with a decidedly French flair. The multinational crowd wandered along the uneven cobble streets, slipping in and out of the small souvenir shops, art galleries and cafes. The aromas of zesty dishes mingled with the body odors in a ying/yang result. Well rested, well fed, free of the frustration and anger imposed by the incompetent guide and of a slightly cooler temperature and the party-like atmosphere would have been much more appealing. Montmartre is on my list as one of the places I've been that I wish to experience again. 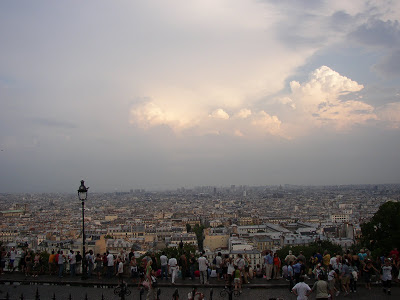 Montmartre is the highest hill in the city of Paris, also known as the Painter’s Hill, a place that has inspired numerous artists including Auguste Renoir and Vincent Van Gogh as well as Dali, Monet and Picasso. Montmartre translates to ‘mountain of the martyr’, getting its name from Saint Denis, the patron saint of France, who was decapitated on the hill around 250 AD. Besides an artist haven, the area is famous as a nightclub district. Its crowning glory, the domed Basilica of the Sacré Cœur is visible from miles away. The view pictured is from the Basilica's steps.

On the trek back to the hotel, made more than sixteen hours after leaving it, the kids were taught how to sneak through a metro gate. Our stunningly inept guide had once more taken us into the wrong subway line, though this time he did realize his error before we got aboard the wrong train. We exited from the wrong line appropriately enough but, whether out of laziness or the unwillingness to purchase more tickets, we then illegally reentered to the correct line, our guide helpfully showing us how to hold open the gate so that we could all enter without a ticket.

And educational tour, indeed.
Posted by Donna Russo Morin at 9:07 AM