In the world of human intention, what does come first, the chicken or the egg? Do I learn special skills to infuse authenticity into the stories I write, or…do I write women who possess unique abilities so I may indulge in learning those special skills for myself? It would take a Freudian upholstered couch to fathom the truth. For now, I am simply grateful that my work writing historical fiction affords me the excuse/opportunity for unique research. 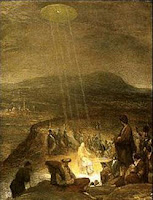 In my upcoming release, The King’s Agent (Kensington, March 1, 2012) a major aspect of my study centered on the presence and evidence of extraterrestrials during the Renaissance era. (Don’t scratch your head at me yet, I’m far from done.) The greatest evidence of said extraterrestrials can still be found in the paintings of the period, the sheer volume of which is staggering. Not only was I able to ferret out a plethora of books dedicated to the subject, I found more than a few documentaries and television shows covering the topic as well.

It may have all seemed a trifle “National Inquirer-esque” if it wasn’t for the fact that many of the paintings with images of ‘air ships’ and other symbols relatable to modern man’s notion of extraterrestrials, came from some of the great names of Renaissance painting…Carlo Crivelli, Sebastiano Mainardi, and Masolino to name a few.

For this same book, I combined the creative genus that is Dante Alighieri and his Divine Comedy with the real time adventure game, The Legend of Zelda (you may crook a brow at me now). Some moments were challenging, discerning every nuance of Dante’s allegory. But in the next phase came a drastic shift, one equally as daunting, translating each canto—Hell, Purgatory, and Heaven—into video-game-like challenges. The work required authentic world-building if I was to enable smooth suspension of disbelief. I could rightly—and did—play the game yet again, in the name of research.

In all my books, I exorcise a facet of my personality or current life situation. In The King’s Agent, I laid bare my desire for a life of uplifting, trivial fun. My research—replete with aliens, Dante, and Zelda—was thick with it, while giving homage to the burdens of responsibility and duty that imbues every human life, no matter how hard we may try, at times, to outrun them.

In my first book, The Courtier’s Secret, I created a character that merged my reality and my greatest desire…a female Musketeer. But to pit this woman against other Musketeers—the greatest swordsmen the world has ever known—I had to know what that physical challenge might feel like.

My oldest son enrolled in fencing lessons with me and it turned out to be a wonderful shared experience. If only we could have combined our individual prowess, we would have made a most formidable duelist. As one of the oldest in the class, my reflexes weren’t quite as nimble as the other students, and though I possess a certain grace, it did me little good when moving seconds behind my opponent. Fencing is a testimony to the quickness of action and reaction as well as the dexterity of execution. My son, a young teenager at the time, enjoyed such quickness. Unfortunately, he had also recently sprouted size 13 feet, mammoth paws the puppy had not quite grown into yet. He reacted swiftly but with the ungainliness inherent in a gangly youth. Through the laughter, I learned the physical nuances and challenges a swords(wo)men must surely face, if not the true threat to life and limb.


The main character in my second book is not as aggressive, but Sophia does, nevertheless, conduct work meant only for men. It was only natural then that I tried my own hand at glassblowing for The Secret of the Glass. In all honesty, I have to emphasize the word ‘try’; while I took the lessons, I was less 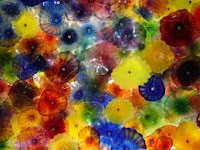 than successful in creating a viable piece (it exploded during the annealing, or cooling period…too many air bubbles). I will never forget, however, the enormity of the heat as I stood at the gaping mouth of the furnace, nor the heaviness of the rod as I spun its end in the molten material, then held it to my lips in the climactic attempt at creation. Failure at formation aside, I don’t doubt for a moment that the experience added an authenticity to my work that readers have enjoyed.

In To Serve a King, my current release, I created an almost anachronistic character, purposefully so. Genevieve Gravois, raised to hate the man she believes responsible for the death of her parents, is taught to use that acrimony to hone skills typical of the men of her era. Genevieve’s weapon of choice…the bow and arrow. As with my first two books, I knew I couldn’t give an authentic narrative of a woman—armed and dangerous—unless I knew what it felt like. I set out to learn how to shoot a bow.

Though there are plenty of shooting ranges close by (I live in Rhode Island; just a 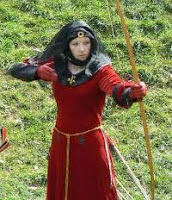 bout everything is close by), they are all ‘members only’ clubs, and I knew no members. Fortunately, however, my sons had been boy scouts, and we had, along that journey, acquired a simple compound bow. Armed with directions found on the internet as well as this simple weapon, I set out to master it. Unfortunately, it was the dead of winter and the only easily accessible, safe target was the inside back wall of my garage. I’ve yet to fix all those damn holes.

My current work in progress is the beginning of a series…one to illustrate the birth of women artists in the moments of the High Renaissance in Florence. Set against the backdrop of political upheaval and deadly family rivalries, not only will these women be learning the creative techniques for painting and sculpture, they’ll be forced to disguise themselves as servants, nuns, and courtesans to save one of their own.

Posted by Donna Russo Morin at 9:36 AM

When you want to take a research trip and need a good researcher to help, let me know. ;-}}